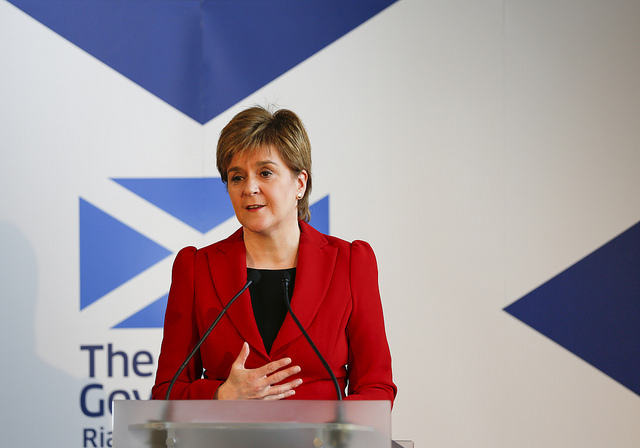 THE SCOTTISH government has sent a letter to Theresa May asking her to respect the powers of devolution after Brexit.

Alongside Welsh Prime Minister Carwyn Jones, First Minister Nicola Sturgeon is proposing amendments to the European (Withdrawal) Bill that will allow the transfer of powers to the Scottish Parliament and Welsh assembly when the UK leaves the EU in 2019.

Under clause 11 of the bill proposed by the UK Government, Westminster will retain powers like; the environment, fishing, agriculture and justice co-operation, a move which the first minister has labelled a “power grab”.

“We hope that they will be received in the way they are intended.” Scottish and Welsh Governments

The letter addressed to the PM dated 19 September 2017, states: “We have been clear since the bill was first introduced that our governments could not recommend it as currently drafted to our legislatures for their consent.

“We have now set out our reasons for that, in detail, in legislative consent memorandums laid before each of the Scottish Parliament and the National Assembly for Wales.”

Asking the PM to “work with, not against devolution” the respected governments are proposing changes to the bill that would see powers transferred directly to the devolved governments after Brexit.

Joint letter to @theresa_may from @fmwales and I, seeking amendments to EU Withdrawal Bill. The principles of devolution must be respected. https://t.co/vVeW8NHlp1

The letter says: “We have made these amendments widely available, and in particular to chairs/conveners of the relevant committees in the National Assembly for Wales and the Scottish Parliament.

“We hope that they will be received in the way they are intended: as a constructive contribution by the devolved administrations, which would enable progress to be made among the governments in a way which respects the hard-won devolution settlements of the UK.”

The move comes just over one week after the EU (Withdrawal) Bill passed by 36 votes in the House of Commons after the second reading stage.

All Conservative and DUP MPs were joined by seven members of the Labour Party who defied the whip to vote for the controversial bill.

The Scottish and Welsh governments have consistently said they oppose the legislation in its current form since it was revealed earlier this year.

Theresa May has repeatedly snubbed pleas for negotiations from Scotland and Wales on Brexit.

“The Scottish Government is clear that any policy areas within devolved competence, carried out at EU level, should return to the Scottish Parliament.” Michael Russell MSP

There are 38 proposed amendments to the bill from the devolved governments.

Minister for UK Negotiations On Scotland’s Place In Europe Michael Russell has also sent a letter to Finance and Constitution Committee Convenor Bruce Crawford to tell him of his opposition to the bill as it stands.

Russell’s letter to Crawford concludes by saying: “The Scottish Government is clear that any policy areas within devolved competence, carried out at EU level, should return to the Scottish Parliament in the event the UK leaves the EU.

“Given the way the European Union (Withdrawal) Bill is drafted, the extent of the list presented to the Scottish Government illustrates the scale of potential UK Government control over devolved policy areas.”