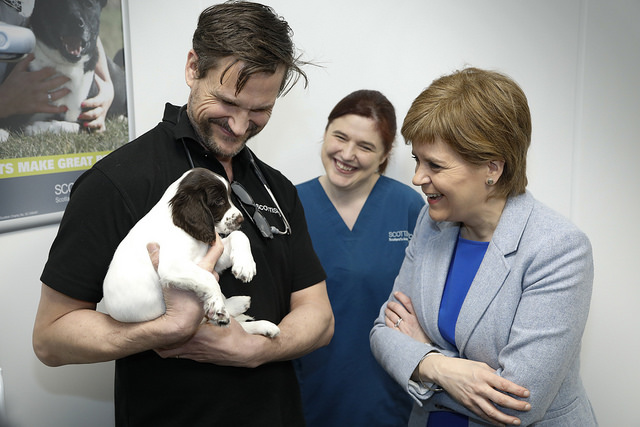 THE illegal puppy farming trade, lengthy court cases and record numbers of animals admitted to the National Wildlife Centre are among the reasons that demand for the services of the Scottish Society for the Prevention of Cruelty to Animals is greater than ever before, according to the organisation’s chief executive.

Commenting this week on a £141,000 boost to the Scottish SPCA’s education programme thanks to fundraising efforts by the Scotmid Co-Operative, the animal welfare charity’s chief executive Kirsteen Campbell noted that “Demand for our services has never been higher, so the need to make sure Scotland’s children have a strong grasp of animal welfare has never been greater.”

Speaking to CommonSpace today [19 February], Campbell elaborated on the pressures facing the Scottish SPCA, explaining: “We believe several factors have contributed to increasing demand for the vital work we do.

“Our work to tackle the illegal puppy trade has led to increased awareness of this barbaric industry and offences against animals. The knock-on effect of this is more calls to our animal helpline and more incidents which our Special Investigations Unit and inspectorate have to attend.

“Our work to tackle the illegal puppy trade has led to increased awareness of this barbaric industry and offences against animals.” Scottish SPCA chief executive Kirsteen Campbell

“The expansion of our education programme, which is at the heart of our work, means more and more people are aware of responsible animal care too. We have made positive progress with the Scottish Government to amend legislation to allow us to rehome animals caught up in criminal proceedings more quickly and to increase maximum sentencing for animal abusers.”

In recent years, the Scottish SPCA has worked to target the illegal puppy farming industry, which the Scottish Government launched the ‘Buy a Puppy Safely’ campaign to tackle in November 2018.

In Scotland, the puppy trade is estimated at £13 million per year, with many of those sold being illegally bred. According to a BBC News report, only 24 per cent of Scots buy from an approved breeder, while one in four would consider buying online, which is how the majority of illegally bred puppies are sold.

Speaking at the campaign’s launch in Edinburgh last year, Minister for Rural Affairs and Natural Environment Mairi Gougeon said: “Illegal puppy farming only leads to misery – many suffer from congenital health problems or behavioural problems, causing distress to owners and leading to expensive vet bills that can cost thousands of pounds.

Gougeon continued: “The most important thing is to see the puppy with its mother, and to get the correct paperwork.

“If there’s no mum and no paperwork, then walk away and report your concerns to the Scottish SPCA helpline.”

The Scottish SPCA’s Special Investigation Unit (SIU) has spearheaded Operation Delphin, a cross-agency effort to disrupt the illegal puppy trade. Accounting for additional costs such as vet bills, it typically costs £15 per dog per day in the charity’s care. The number of jobs passed to the charity’s SIU team in 2018 was 529, a substantial rise from 332 in 2017.

In one instance, the Scottish SPCA removed 45 dogs from an illegal puppy breeder, many of which were removed from what the organisation describes as “appalling conditions”. The puppies’ health issues factored in to the total bill racked up for their essential treatment and daily care, which reached £440,000 as the Scottish SPCA awaited the court hearing.

Further challenges have emerged from the fact that, in Scotland, animals cannot be rehomed whilst a court case is ongoing, meaning animals have to spend many months or even years in a Scottish SPCA centre until a case concludes or an owner legally signs animals in to their care.

As well as not being ideal for an animal’s long-term welfare, this has placed strains on the charity’s resources; in 2018, the Scottish SPCA had over 1,000 animals in temporary refuge do to ongoing court cases, meaning that in some cases they did not have space for animals which could be rehomed much more quickly.

Campbell told CommonSpace that, while all of these factors have placed a strain of the Scottish SPCA’s resources, “we are aiming to deliver long-term systemic change through policy and education which will benefit the Society and animals across Scotland in future.”

If you wish to report an injured or distressed animal, the Scottish SPCA’s animal helpline can be reached on 03000 999 999.