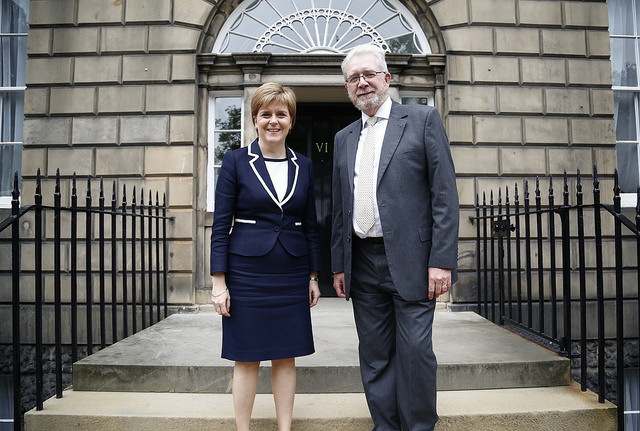 SCOTTISH GOVERNMENT Brexit minister Mike Russell has said another Brexit vote is now “essential” in light of findings by the Electoral Commission that the Vote Leave campaign breached electoral law by overspending.

The watchdog’s conclusions, published today (17 July) found that Vote Leave, the official campaign for the UK to leave the EU, exceeded the legal spending limit of £7m by almost £500,000.

The report says the campaign funnelled funds through the Brexit youth campaign BeLeave in order to sidestep the rules. Nearly £2.7m of Vote Leave’s budget was spent on Aggregate IQ, a Canadian digital marketing company, while a further, undeclared, £675,000 was paid to the firm by BeLeave.

SNP MSP and government minister Mike Russell responded to the revelations on Twitter this morning by stating: “Damning conclusions from the @ElectoralCommUK – the result in favour of #Brexit was obtained, at least in part, by breaching electoral law.

“It cannot be allowed to stand – another vote now essential providing there are safeguards for Scotland in terms of possible outcomes.”

The SNP has previously been more equivocal on the issue of whether to back a second Brexit vote, although First Minister Nicola Sturgeon told The New Statesmen in October 2017 that the prospect may become “irresesistable” if the UK were faced with a no-deal scenario.

In recent weeks, the SNP’s Westminster leader Ian Blackford commented that the party would have an “open ear” on the issue, while Russell added that “people require a say on the final outcome”. These latest remarks represent the first time a minister has explicitly stated that there must be a second vote on the issue.

As the EU referendum was not legally binding, a court cannot order a repeat of the referendum in light of the investigation, so any repeat of the vote would have to be proposed by the UK Government and agreed by parliament.

Sharing a post by Guardian journalist Carole Cadwalladr which noted that Boris Johnson, Michael Gove and Theresa May’s political secretary, Stephen Parkinson, were all heavily involved in Vote Leave, Russell added: “Important point. At the very least Gove should stand down until all the legal process is concluded.

“May should insist on that…”

Bob Posner of the Electoral Commission said the watchdog’s investigation found “substantial evidence” that Vote Leave and BeLeave had “worked to a common plan, did not declare their joint working and did not adhere to the legal spending limits”.

He added: “Vote Leave has resisted our investigation from the start, including contesting our right as the statutory regulator to open the investigation. It has refused to cooperate, refused our requests to put forward a representative for interview, and forced us to use our legal powers to compel it to provide evidence.”

Vote Leave has refuted the claims and accused the Electoral Commission of being “motivated by a political agenda”.

A spokesperson said: “The Electoral Commission’s report contains a number of false accusations and incorrect assertions that are wholly inaccurate and do not stand up to scrutiny.

“It is astonishing that nobody from Vote Leave has been interviewed by the Commission in the production of this report, nor indeed at any point in the past two years. Yet the Commission has interviewed the so-called ‘whistleblowers’ who have no knowledge of how Vote Leave operated and whose credibility has been seriously called into question.

“Vote Leave has provided evidence to the Electoral Commission proving there was no wrongdoing. And yet despite clear evidence of wrongdoing by the Remain campaign, the commission has chosen to ignore this and refused to launch an investigation.

“All this suggests that the supposedly impartial commission is motivated by a political agenda rather than uncovering the facts.”

The Electoral Commission has insisted that it conducts investigations based on evidence and “irrespective of the political views of the party or campaigner concerned”, adding that it had asked Vote Leave for interviews multiple times, but the campaign had refused.

Autonomy, a grassroots Eurosceptic SNP group has criticised Mike Russell’s remarks and pushed instead for a focus on a second independence referendum.

A spokesperson said: “The SNP playing an active role in relitigating the original 2016 referendum not only throws its current independence strategy into disarray, but also helps the Leave side in England, whose nationalistic tendencies would be exacerbated and mobilised by seeing Scottish seperatists wade into what is fundamentally an English issue at its core.

“Instead of trying to rescue the British state from itself, now is the time to make for the lifeboat of independence and redouble our push towards a referendum on that.”

Another Brexit campaign, Leave.EU, which was headed by Nigel Farage, was fined £70,000 early this year after it was found that it had failed to declare at least £77,380 in spending.

Britain Stronger in Europe, the official campaign to Remain in the EU, was also fined £1,250 over failure to provide invoices and reporting some spending in an aggregated, as opposed to itemised, form.