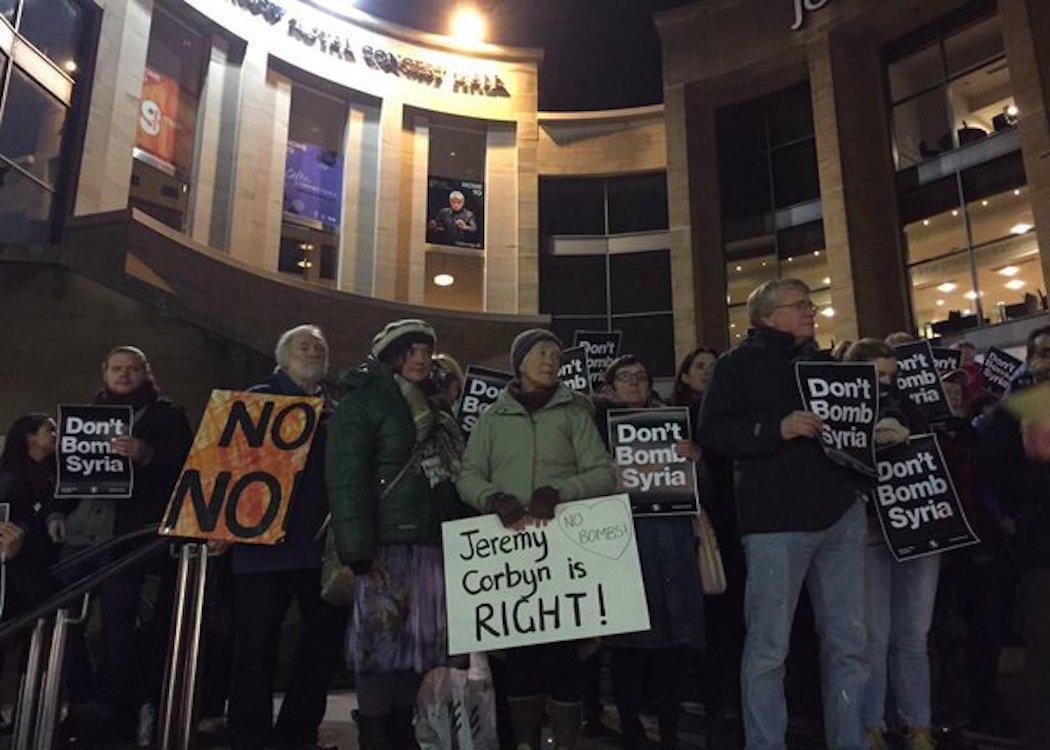 RAF AIRCRAFT have set off from the Scottish military base of Lossiemouth for the UK bombing campaign in Syria – despite the rejection of military action by Scottish politicians and campaign groups.

The Westminster parliament voted in favour of military action in Syria, but 97 per cent of Scottish MPs opposed the decision to bomb without a clear military strategy.

The bombing campaign, which has already targeted oil fields in Daesh controlled Syria , has also been condemned by the Scottish Government, the Scottish Labour leadership, the Scottish Green Party and a range of peace campaign organisations.

Hours ahead of the vote MSPs and campaigners gathered outside of the Scottish Parliament to oppose military action.

A spokesperson for Edinburgh Stop the War told CommonSpace: “There were hundreds of people at the parliament saying ‘Don’t bomb Syria – build peace not war.’ We were joined by at least 12 MSPs and several more sent messages of support. SNP, Labour, Greens and Independents were represented.

“MSPs and many others commented that this is what democracy should look like – elected representatives listening to those who elected them and articulating the anti-war views of the majority in Scotland. The contrast with Westminster where MPs, unlike their constituents, continue to ignore the lessons of Afghanistan, Iraq and Libya.”

In the Westminster debate the SNP oppose the bombing plans, instead calling for action to cut off oil and arms sales to Daesh. They also called for greater support for Kurdish forces who are fighting Daesh, yet remain under bombardment from Nato forces from Turkey.

Since the vote, over 76,000 people have signed an SNP petition against bombing Syria.

Peace campaigners previously told CommonSpace that the vote for military action emphasised the need for an independent Scottish foreign policy .

Isobel Linday, former leader of the Scottish Campaign for Nuclear Disarmament, added: “Without independence Scotland is denied an international role. This has both practical and moral importance for us. The identity of the British state is so dominated by militarism that the question of whether a few more bombs will make things better, worse or no different is entirely secondary to whether Britain will lose prestige by not flexing its military muscle.”

A number of Conservative MPs argued in parliament that the UK should join military action to maintain its national status as a global power.