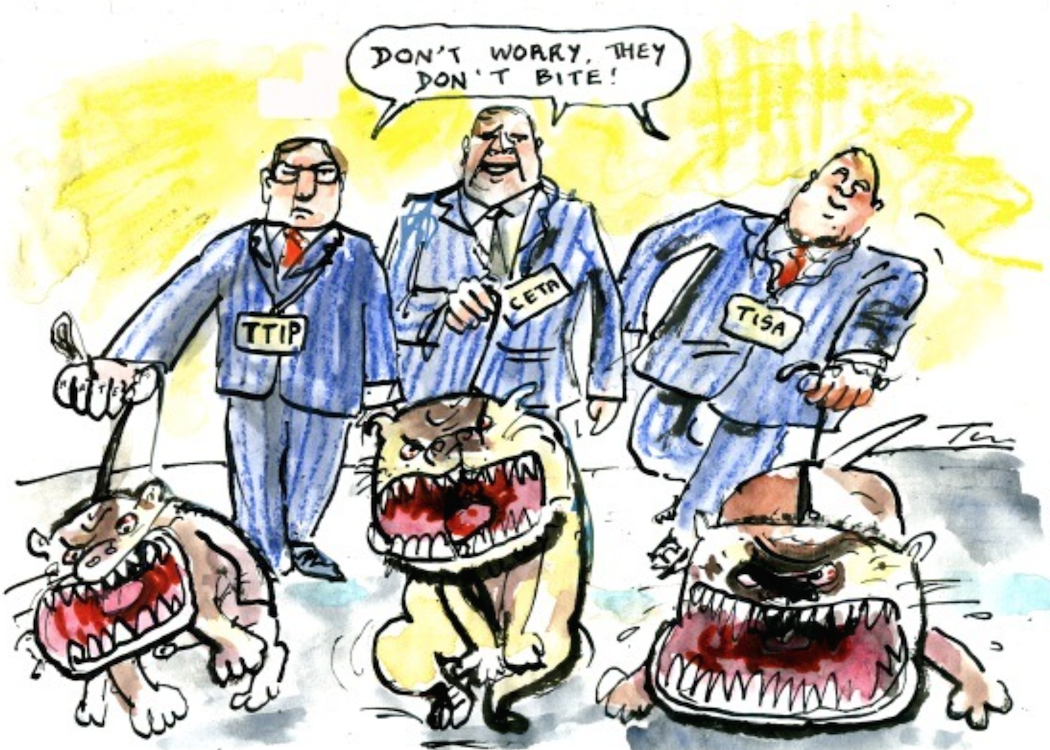 SECRET CORPORATE COURTS represent a direct threat to public services and the power of government to act in the interests of the people, according to demonstrators challenging corporate law firm Shearman and Sterling in London.

CommonSpace is following the campaign efforts of a Scottish coalition, who are in London to raise concerns over the controversial ‘Transatlantic Trade and Investment Partnership’ (TTIP), described as a corporate power grab by its opponents.

One of the gravest concerns of activists, trade unions and Scottish MPs is the ‘Investor State Dispute Settlement’, which would entrench the power of corporations to sue governments for vast financial damages to enforce corporate interests.

Around 20 activists gathered outside the Shearman & Sterling office on Appold Street, London, to hold a demonstration and hand out leaflets about their case.

Group organiser Jean Kemp from St Andrews led the group in megaphone chants of “Say hey! Say ho! Secret courts have got to go!” and “Grant Shapps [the Tory minister] is to blame. He should hang his head in shame!”

The group spoke to hundreds of people from inside the legal offices, as well as passers by.

Venetia Menzies, a student at University College London and amateur filmmaker, joined the Scottish delegation to show support: “We’re here today to protest outside of this office because TTIP is going to give them measures to sue our governments for any policy that interferes with their profit making.

“This has already happened in Germany. When they wanted to finish nuclear power they were sued by a big energy company. The worst thing about this is that the entire proceedings of making this document [TTIP] has been done completely undemocratically. It’s going to change the rules of trade across the world, but no one is being asked,” Menzies told CommonSpace outside the office building.

The security at the building requested that the protestors leave, as the pavement was designated ‘private property’. As the protest continued security called the London Metropolitan police, but by the time they had arrived the campaigners had handed out all there leaflets and were looking for a coffee shop.

One of the security guards, a graduate in International Relations, expressed support for the protest and said he was opposed to corporate led globalisation.

Global Justice Now, a campaign group for transparency, democracy and social justice, also comment on the protest: “Corporate law firm Shearman and Sterling are the focus of a protest today by anti-TTIP activists. The huge international company is set to make millions on the back of a new generation of “trade deals” – including TTIP (the Transatlantic Trade & Investment Partnership), TPP (Trans-Pacific Partnership) and CETA (Comprehensive Economic and Trade Agreement).

“It is generous to call these agreements trade deals, they are really a hand over of power from states to corporations with Shearman & Sterling acting as global enforcers.

“Shearman & Sterling are cheerleaders (and major beneficiaries) of secret corporate courts, a key part of these new deals. This ‘Investor State Dispute Settlement’ (ISDS) mechanism is the most controversial element of these deals. ISDS is a secretive parallel legal system outside the jurisdiction of national courts (they can overrule even the UK Supreme Court). It is designed to allow multinational companies to sue governments for doing things they don’t like.”

Scotland has not escaped corporate lawsuits either. The Scotch Whisky Association – dominated by spirits firm Diageo – has halted minimum pricing for alcohol legislation through a three year legal dispute.

Shearman & Sterling won a case in Argentina relating to tariffs on the water supply and used a corporate court in a $250m payout against the government of Romania.

The Scottish delegation held meetings at the Palace of Westminster yesterday, where Stuart McDonald MP said there was time to strengthen the SNP’s position on TTIP .

The corporate pact – which had been opposed by over 3 million people across Europe – was negotiated in tight secrecy between the European Commission and United States negotiators.

Shearman & Sterling were contacted repeatedly by CommonSpace for comment. None was received by time of publication.