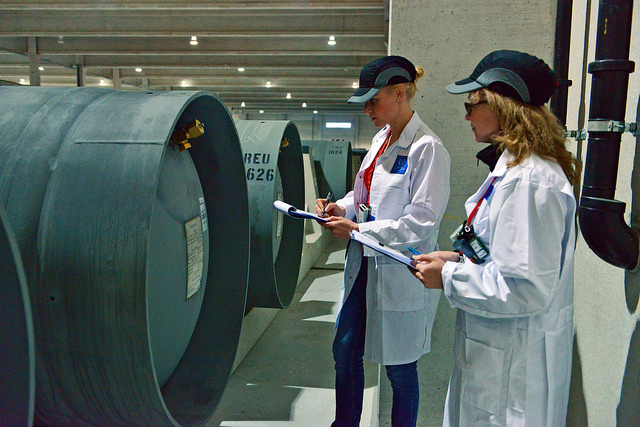 THE SCOTTISH Campaign for Nuclear Disarmement (CND) has raised warnings over the impact on Trident safety of the UK’s withdrawl from the pan-European nuclear regulator.

The European Automic Energy Community (Euratom), as the body that regulates the movement of nuclear materials in Europe, currently ensures safety standards are met in the transport of Trident’s nuclear weapons around Scotland and the rest of the UK.

The transport of nuclear warheads to the naval base at Faslane on the Clyde has drawn concern, with activists tracking and blockading vehicles to demonstrate how obtainable the weapons are.
Prime Minister Theresa May has signalled she wants the UK to leave Euratom, as its entanglement with the EU means it shares in the 28 member block’s freedom of movement, helping scientists and nuclear specialists travel across Europe, servicing the nuclear industry.

Speaking of Scottish CND’s concerns over the the removal of Euratom’s jurisdiction over Scotland, Scottish CND chair Arthur West said: “We understand the Euratom regulates the transport of nuclear materials. Therefore our two worries are that health and safety standards in relation to the road convoys could suffer by being out of Euratom.

The UK Government paper on leaving Euratom does not mention Trident, Scotland or the Scottish Parliament.

“We also understand that although Switzerland is not  in the EU it is still a member of Euratom, it is a member of the body.

“It is important to clarify whether the UK could have the same status in the event of Brexit.”

As with many other issues in May’s increasingly fractured government and party following the loss of the Conservative majority in the General Election, the plan to quit Euratom now faces internal opposition.

The body, which also regulates nuclear waste and its disposal and organises nuclear research, has become one of many EU associated institutions that have become a battle ground between figures inside and out the Tory party who want a ‘harder’ or ‘softer’ Brexit.

Figures in the government who support exit from Euratom fear that membership would mean the continued influence of European Court of Justice (ECJ), on the UK. May has pledged that the authority of EU law will be “ended forever” in the UK.

Dominic Cummings, who headed the vote Leave campaign during the EU referendum criticised “government morons” for wanting to leave Euratom.

The UK Government has published a paper, ‘Nuclear materials and safeguards issues’ on nuclear safety after Euratom, which claimed that a seemless transition in safety regimes from Euratom to the UK was possible.

However, it failed to metion Trident or Scotland and the Scottish Parliament.

The SNP has protested that the Scottish Parliament must recieve powers to regulate nuclear materials.

Peter Grant MP said: “The Nuclear Materials and Safeguards Issues paper does not guarantee that any exit from the nuclear body will have full involvement of the devolved administrations. Scotland must be given a guarantee over powers on regulation over waste and emissions to avoid any imposed UK policy framework that would be detrimental to Scotland’s interests.

“Setting out a robust safeguarding strategy is critical to UK energy security, scientific research and medicine.”