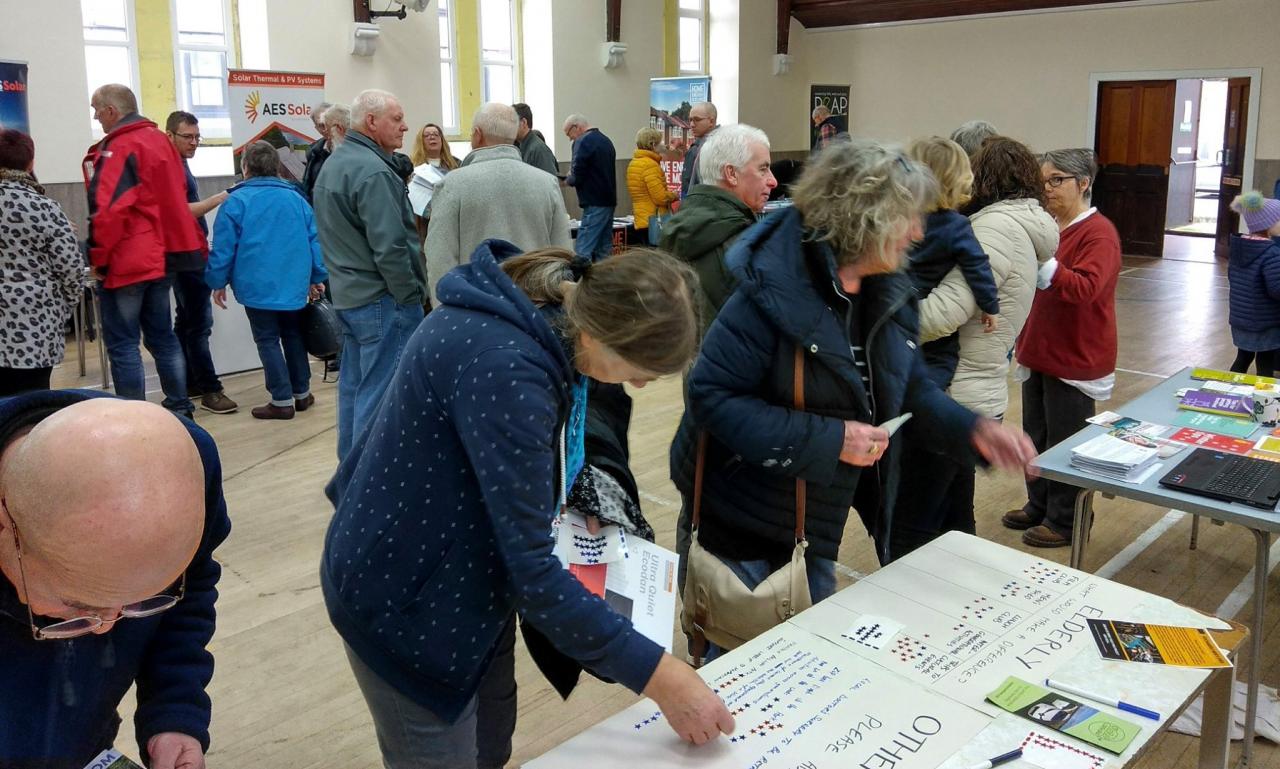 Ahead of COP26, Scottish Community Alliance raises concerns over the Scottish Government’s approach to engaging local communities with the climate emergency

REPRESENTATIVES from 17 members of the Scottish Community Alliance have written to the Scottish Government raising concerns about its approach towards the community sector’s contribution in the fight against the climate emergency.

The Scottish Community Alliance (SCA) is composed of 24 networks, comprising over 2000 community-based organisations and enterprises working across Scotland.

The letter highlights the worry that “the Scottish Government has closed down lines of communication with the sector and may be about to present us unilaterally with a new ‘strategic approach’.”

The groups further state that this appears to represent a top-down form of governance as opposed to “a more open, collaborative approach based on co-production with the sector and one that is consistent with the principles of localism and subsidiarity.”

The SCA have requested a meeting with Roseanna Cunningham MSP, the Cabinet Secretary for Environment, Climate Change and Land Reform, to discuss how communities might be better supported to play a stronger part in the fight against climate change in Scotland.

This letter follows the Communities Call for Climate Action campaign, launched towards the end of last year, which called on community groups to sign a pledge stating that, while they support the Scottish Government’s declaration of a climate emergency, it could do more to recognise and support the role of communities in facing this challenge.

The campaign has made three demands upon the Scottish Government:

Responding to these demands, a Scottish Government spokesperson told CommonSpace: “Communities will play – and already are playing – a fundamental role in Scotland’s response to the global climate emergency.

“We must ensure our transformation to net-zero takes place in a just and fair way – no-one should be left behind – that is why we established the Just Transition Commission and why our approach to building a Wellbeing economy is so fundamental to ensuring Scotland’s future success.

“We undertook The Big Climate Conversation last year, announced the creation of a network of community climate action hubs, and will shortly establish a Citizens’ Assembly on Climate Change.

“This year we will launch a network of regional community climate action hubs which will help communities to take meaningful action, and our Climate Action Towns initiative will empower and support communities to take action on climate change in a way that takes account of the unique challenges and opportunities each town and region face.”

In the 2020/2021 Scottish Government budget announced yesterday [6 Feb], plans to create Climate Action Hubs and establish a network of Climate Action Towns was set out as one of their climate change priorities.

However, SCA director Angus Hardie told CommonSpace that he feels any changes that are made need to be in done in conjunction communities.

Hardie said: “It feels like someone’s had a good idea in an office but now it’s down to civil service to figure out how to turn it into something.

“Over the years, you see so many initiatives like that, with cash thrown at them, at a time when there’s not enough money. If they’re going to do that, they need to do it jointly with the sector. As it stands, everyone’s being kept in the dark. It feels very odd contradiction; a centralised, top-down approach while they talk about community empowerment and co-production.”

What are communities currently doing to tackle climate change?

There are examples of communities making grassroots efforts to set their own priorities and tackle climate change in their area right across Scotland, in rural and urban communities. In Angus, members of Sustainable Kirrimuir are already working on many fronts, looking at land use, transport, energy, sustainable consuming, growing and waste.

Talking about the practical difference that communities can make Kate Munro, chair of local action group, Sustainable Kirrimuir said: “The advantage of community is the collective knowledge. Many minds are better than any one.

“We’ve had a whole series of events, from food waste and recycling workshops to Swishing (clothes swap), Eco-Christmas and a make your own Pad Workshop, to tackle period poverty. We are working to establish a walking bus for kids to get to school and looking at how to get more people cycling in and around the town.

“Many in our community already know how to live well with less. Growing food and sharing skills and resources are the skills our grandparents taught us. It is a lovely process to rediscover this across the generations.”

The group is planning on going one step further. In March, they will hold a ‘Route to Zero’ meeting, inviting policy makers, specialists and those with expertise in housing, farming, business, waste management and more to come together and map out some of the structural changes needed.

For Munro, communities play a vital part in the fight against climate change: “We live in a period of unprecedented change… Yet, individually we feel powerless to do anything. Communities have a role in creating a space to connect, discuss, learn and most importantly take action on all of this. Taking collective action is the thing that restores what we need most, hope.”

Further north, in the coastal community of Burghead, a small peninsula town that juts out into the Moray Firth, residents recently came together for an event called to discuss possibilities of using alternative energies. A lot of the housing in this area is not energy efficient and there is no gas supply, leading to a reliance on electricity and high fuel costs.

The event followed a survey carried out by Burghead and Cummingston Community Council and Rural Wisdom, a project which supports older people to make positive change to their communities. About 200 local people responded, with more than half saying they found their homes cold and hard to heat.

Fi Thomson, community worker at Rural Wisdom, told CommonSpace: “Given the growing concerns around climate change and the impact that this has, the event felt particularly timely. The fact that so many people in the local community turned out goes to show that this is an issue on people’s minds, and there’s a clear line drawn between the need to move to renewables and the current issue of fuel poverty.”

The impact of climate change on communities’ health and wellbeing was the subject of a recent briefing paper by Andrew Paterson, Policy and Research Officer at CHEX (Community Health Exchange – an organisation that supports and promotes community development approaches to health improvement).

Speaking to CommonSpace, he said: “If you’re not already thinking about climate action at the same time as your other work which his focussed on local community development and influencing change to tackle inequality, then you should be. The main issue is getting the government to do more. And there is more recognition need of the role the community sector has to play – because it has a way into so many parts of society that others don’t.”

The paper centres around the social model of health which ‘recognises that health and wellbeing results from factors including work, education, housing, leisure and the way we organise ourselves as a society’.

Paterson explained: “This gets away from idea of individual responsibility for health and takes the approach of supporting people in communities who are working to identify their own priorities. Sometimes that includes aspects of health to do with lifestyle, but it could be around resilience, from simple things from having community holding events to addressing issues, influencing decision that affect the community.”

There are also proposals for more radical change. The green new deal plan set out by Common Weal, ‘Our Common Home’, is one such path put forward. Tiffany Kane, Operations Manager at Common Weal believes that local communities will play a key part:

“Our Common Home plan doesn’t start with targets. It starts with working out what is creating the most damage to the environment and then figuring out how to fix it and how long it will take. We found local solutions to these problems. Whether it’s transport, buildings, consumerism, land, trade or food – Scotland can control how we manage, organise and plan all these aspects of our life so they have zero negative impact to the environment.”

“2020 is a crucial year to affect change. We know what needs to be done, and perhaps communities have an opportunity to stand up and show the way forward.” Kate Munro, Sustainable Kirrimuir

Kate Munro of Sustainable Kirrimuir also believes that action cannot be effected by any one section of society alone, saying: “Solving the climate and ecological emergency, cannot be left to the actions of individuals or for that matter, community groups. The changes required demand engagement and action from all sectors, at all levels.

“2020 is a crucial year to affect change. We know what needs to be done, and perhaps communities have an opportunity to stand up and show the way forward. They can unite all kinds of people and show what sustainable living looks like.”

With the UN Climate Change Conference, COP26, set to take place in Glasgow in November of this year, all eyes will be on Scotland to lead the way in tackling climate change. Community groups and organisations have access to people that the government does not. They are now working to make sure that the Scottish Government provides them with a seat at the table.