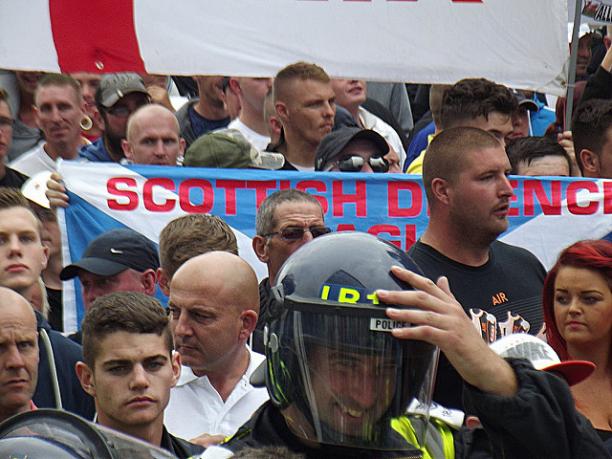 MAGGIE CHAPMAN, co-convener of the Scottish Green Party, has stated that the extremist right-wing Scottish Defence League (SDL) “seems to have been facilitated by the police in spreading intolerance and bigotry”, following her attendance at an anti-fascist counter-demonstration.

The SDL had announced online its plans for a demonstration on Sunday, 4 February, outside of Bute House, the official residence of First Minister Nicola Sturgeon. The SDL claimed that the Scottish Government allowed the late veteran, Darren Greenfield, to die on the street in favour of fulfilling a Scottish Government target of providing homes for 2,000 refugees, which was met three years early.

According to the anti-fascist campaign group Unite Against Fascism (UAF), the Edinburgh cohort of which was actively involved in the counter-protest, the SDL were outnumbered by counter-demonstrators, who reportedly included trade unionists and Labour councillors and numbered “just under a hundred”. According to UAF, the counter-demonstrators “barracked and silenced” the SDL.

“Scapegoating refugees and immigrants is not acceptable anywhere, and I am determined to do whatever I can to counter it in Scotland.” Scottish Green co-convener Maggie Chapman

Speaking to CommonSpace in the aftermath of the anti-fascist rally, Maggie Chapman said: “It is important that we stand in solidarity as anti-fascists. I was glad to be able to join the protest against hatred on our streets yesterday, although disappointed that, once again, the SDL seems to have been facilitated by the police in spreading intolerance and bigotry.

“It is utterly disgraceful that they attempted to use the tragic death of Darren Greenfield for their agenda of hate. We know that decades of illegal foreign wars, the flogging off of council houses, the under-resourcing of mental health services and, of course, the ongoing austerity agenda, are what have caused not only deaths like Darren’s, but the lack of facilities and services for many Scots.

“Scapegoating refugees and immigrants is not acceptable anywhere, and I am determined to do whatever I can to counter it in Scotland.”

Asked to clarify how she felt that the SDL had been “faciliated” by the police, Chapman told CommonSpace: “I realise that is perhaps quite a controversial thing to say, but I do struggle to understand why the police facilitate the SDL the way they do. I firmly believe in the right to assemble and in freedom of speech, but not when such actions/words incite hatred or bigotry, and are about curtailing the rights of others.”

Chapman continued: “The SDL were flying the confederate flag (a deeply racist symbol). They don’t want refugees housed. Their racist views, when expressed in such ways, are akin to hate crimes. If a ‘random’ gathering of people started shouting abuse, they would be lifted by the police. And yet the police were out in substantial number (I counted over a dozen police vans in the area) so that fascists could hurl abuse about refugees and immigrants. That, to me, is facilitation.

“They made no attempt to confiscate the confederate flag, although a placard with the words ‘shit’ and ‘dickhead’ were taken off an anti-fascist protester because it was ‘offensive’. It seems that the fascists can get away with whatever they want, and it’s the anti-fascists who have their protests constrained.”

“We will endeavour to see that the fascists don’t get a toehold in Edinburgh and beyond.” Unite Against Fascism spokesperson

Responding to Chapman’s comments, a spokesperson for Police Scotland told CommonSpace: “Under the European Convention of Human Rights members of the public have an expressed entitlement to protest peacefully and without hindrance.  With this in mind all UK police forces have a duty to facilitate all peaceful demonstrations.

“On Sunday, February 4, Police Scotland facilitated a demonstration by the Scottish Defence League, along with a counter protest.  Both were conducted peacefully and without incident.

“There are numerous demonstrations across Scotland each year and we have a wealth of experience in dealing with them. Where there is unlawful protest or disorder that threatens public safety we will always act swiftly and professionally to prevent it and target those responsible.”

In a statement released on the UAF website, a UAF spokesperson commented: “Following a successful Stand Up To Racism conference in Glasgow, last Saturday, Edinburgh UAF members went on to show that the city is somewhere the fascists remain on the margins. With their Confederate flag and thuggish threats, they attracted no one but other little Hitlers.

“We will endeavour to see that the fascists don’t get a toehold in Edinburgh and beyond”.