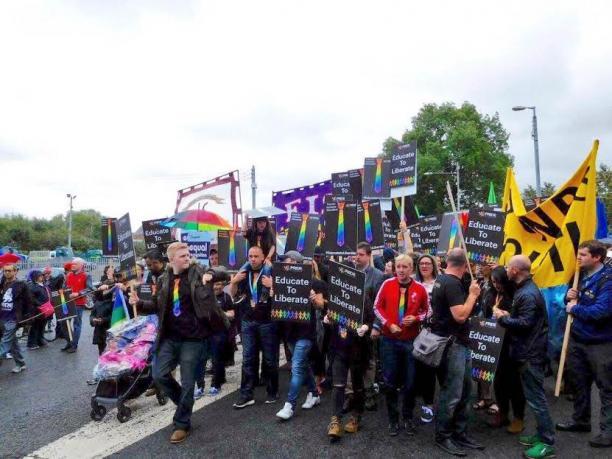 SCOTLAND’S LARGEST education union has called for the introduction of LGBTI education in Scottish schools.

The EIS union backed the demands of the Time for Inclusive Education (Tie) campaign at its conference over the weekend (10-11 June), voting overwhelmingly to back a motion that called for the union to affiliate to the movement, which calls for changes to teaching to make it inclusive of the range of gender and sexual identities in society.

The campaign wants these changes and more to reduce the rate of homophobic bullying in Scottish schools, and the resulting mental health impact on LGBTI children and young people.

Research by the Tie campaign has found that nine in 10 LGBTI pupils experience homophobic bullying at school, and 42 per cent had attempted suicide.

During the debate on the motion, EIS Further Education Lecturers’ Association (FELA) president John Kelly said: “If we are responsible for shaping young adults for the modern world, then our education system must be fully reflective of our society. Therefore, the needs of LGBTI young people must be met when they are at school, so we can put an end to the damage and despair that many LGBTI learners suffer while they are at their most vulnerable.”

In addition to changes to curricular guidance, which would stress the teaching of LGBTI history and social issues across classes, the Tie campaign is demanding new measures for the monitoring and reporting of homophobic bullying and abuse.

Following the passing of the motion EIS activist Pam Currie said: “I’m delighted that the EIS has affiliated to Tie. The EIS LGBTI network has worked closely with the Tie campaign since its inception and the campaign has helped to raise the profile of LGBTI inclusive education within the EIS, as well as the challenges faced by both LGBTI learners and staff. The decision to affiliate affirms the role that Tie have played in changing Scottish education for the better and takes us another step closer to having an LGBTI inclusive education for learners in all Scottish schools and colleges.”

The backing is vitally important to the Tie campaign, as it displays broad support among Scotland’s educators for the changes. The union is influential when it comes to matters of education policy and care for students, alongside its lobbying for pay and condition for its members.

Alongside many other Scottish trade unions and civic organisations, Scottish party leaders including Scottish Labour’s Kezia Dugdale, First Minister Nicola Sturgeon and the co-convenor of the Scottish Greens Patrick Harvie have all backed calls for reform.

A spokesperson for the Tie campaign said: “That the largest teachers’ union in Scotland has affiliated to our campaign is a massive step forward for us. We are often asked what teachers think about our proposals, and whether or not they support our aims: this move resolutely answers that question. This, along with the parliamentary mandate for our calls, makes clear that Scotland is ready for LGBTI inclusive education in all of our schools.

“We have worked closely with many EIS representatives throughout the duration of our campaign and, indeed, the union has a seat at the national working group that has been established to implement our proposals. As such, we will continue to work with the EIS and others to ensure that the strategy outlined in our well supported pledge is realised, as it is time to end the legacy of Section 28 – once and for all.”