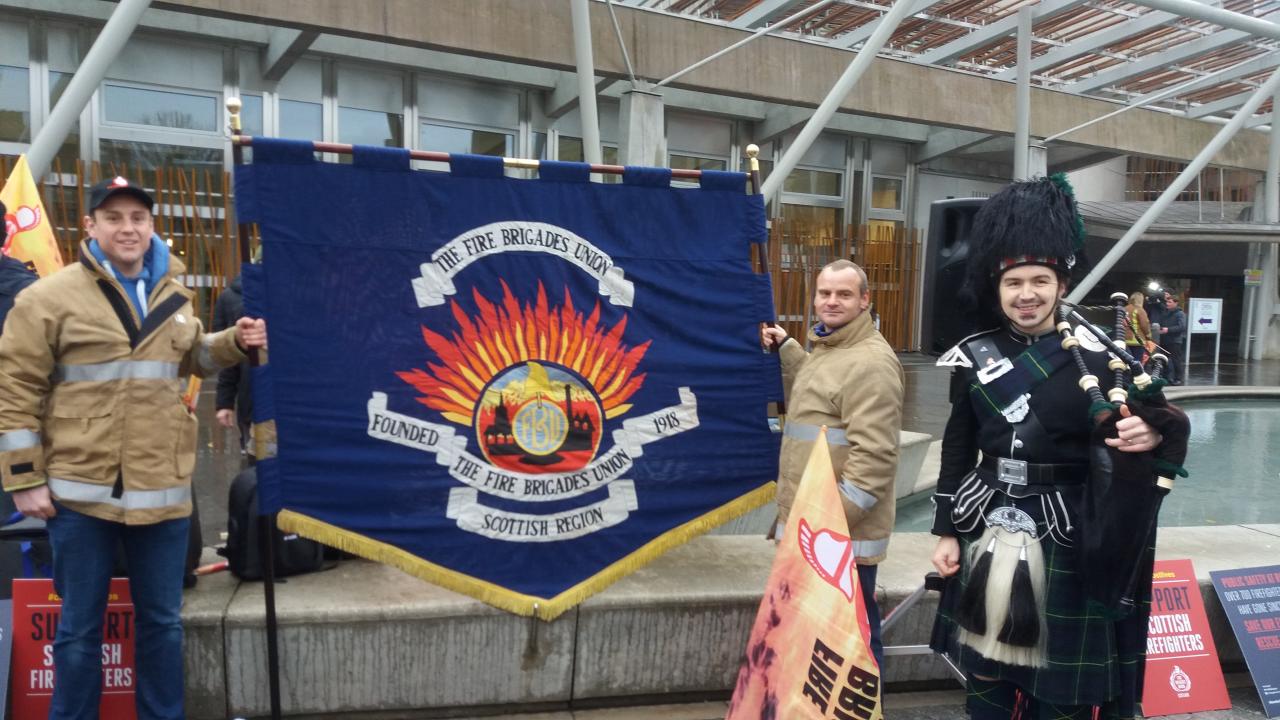 HUNDREDS OF FIREFIGHTERS from across Scotland rallied outside the Scottish Parliament on Thursday morning in protest against cuts, job losses and potential fire station closures.

The lobbying effort, organised by the Fire Brigades Union (FBU) Scotland and joined by other trade unions including PCS, Unite and RMT, follows the reported leaking of documents to the FBU, which apparently suggest that the model under which the Scottish Fire and Rescue Service (SFRS) currently operates cannot be sustained beyond the end of this financial year.

FBU Scotland have been vocal in their concern and seek guarantees of no further cuts to the fire service. When the SFRS was formed in 2013 as the result of a merger of eight separate fire services, the Scottish Government made commitments to safeguard frontline resources.

Speaking ahead of the rally, Denise Christie, regional secretary of FBU Scotland, said: “Each day across Scotland, dozens of fire engines cannot respond to emergencies because there are simply not enough firefighters to crew them. It is a disgrace that more cuts are even being considered.

“We have lost over 700 frontline firefighters in Scotland since 2013 and response times to emergencies have been lengthening in recent years as a result. This is unsustainable and firefighters are demanding an end to the cuts and are asking for a commitment from the Scottish Government for future investment.”

“This is not the level of service that we expect or deserve and the politicians know this.” FBU Scotland regional secretary Denise Christie

“This is not the level of service that we expect or deserve and the politicians know this. It’s why there is a broad political consensus that these cuts are bad for public safety.”

“To the government: it’s no good having the will, if you’re not prepared to will the means. Use the powers that you’ve got to stop the agenda of austerity from the Tories. Because I’ll tell you this – many of us here campaigned for years to establish this Scottish Parliament. And we didn’t do it so it would simply be a conveyor belt for Tory cuts.”

Early reports from the rally’s organisers indicated that while all political parties represented in the Scottish Parliament had been invited by the FBU to participate in the rally, only Labour politicians were present. However, Green MSP Ross Greer was also present.

Leonard pursued the matter further during First Minister’s Questions, when he pressed First Minister Nicola Sturgeon to guarantee no further cuts to the SFRS.

Sturgeon responded by insisting that the fire service’s operation budget had increased on the past year by £21.7m. She also added that the SFRS has not faced any compulsory redundancies or station closures since its establishment, and following the recruitment of 100 additional firefighters in January, a new campaign to attract 300 further recruits will be launched next week.

Sturgeon also highlighted Chancellor of the Exchequer Philip Hammond’s announcement in the autumn budget on Wednesday that police and fire services in Scotland will be brought into the line with the rest of the UK and be exempted from VAT payments, a reversal for which the SNP has long campaigned.