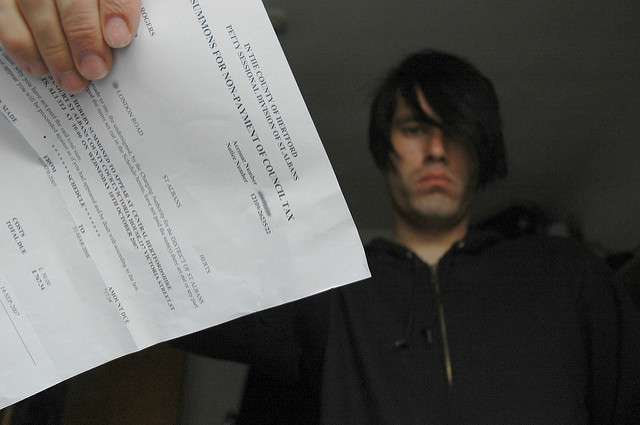 THE SCOTTISH GOVERNMENT has attributed the dramatic rise in the number of warrants issued in Scotland for non-payment of Council Tax to the effect of Tory welfare cuts, and has reaffirmed its commitment to making local taxation more progressive.

If an individual has failed to respond to a council’s final notice, a summary warrant is issued by a sheriff officer – which are, despite their officialdom, private companies empowered by local authorities – after being granted by the court. In addition to including a 10 per cent penalty on the original debt, these warrants allow sheriff officers to take money from the debtor’s bank account or have the account frozen. They can also arrest a debtor’s earnings, or even remove belongings from their home and sell them to pay off the debt.

While Scottish Labour have argued that the new data highlights the fact that many people in Scotland are struggling with bills, and have called on the SNP to bring forward plans to scrap and replace Council Tax, the Scottish Government has defended its record on local taxation and placed the blame for rising Council Tax debt upon the policies of the UK Government.

“Under UK Government welfare cuts, money is being taken from the pockets of low income families, pushing them into crisis, debt and poverty. We are spending more than £127 million this year to try and mitigate that.” Scottish Government spokesperson

Speaking to CommonSpace, a Scottish Government spokesperson said: “We know that, under UK Government welfare cuts, money is being taken from the pockets of low income families, pushing them into crisis, debt and poverty. We are spending more than £127 million this year to try and mitigate that, and provide vital support for low income households.

“We have made Council Tax fairer and included a 25 per cent increase to the child allowance in the reforms that were introduced last year. We have extended relief for low to middle income households from the impact of the Council Tax reforms on properties in bands E-H. And we have invested over £1.4 billion in the Council Tax Reduction scheme since 2013/14, assisting almost half a million households each year to meet their Council Tax.

“We have also said that we are committed to making local taxation more progressive and that we are open to further dialogue on options for local tax reform.”

The link between a widespread inability to pay Council Tax and Tory welfare policies was also made by the homelessness charity Shelter Scotland.

“Much more should be done by local authorities to give advice and help people meet their payments rather than simply threatening them with court action.” Shelter Scotland director Graeme Brown

Shelter Scotland director Graeme Brown told CommonSpace: “The increase in the use of summary warrants for Council Tax arrears – which in most cases are threatening people who are struggling to make ends meet – is concerning.

“The impact of harsh welfare reforms, the roll-out of universal credit, stagnant wages and zero-hours contracts are making it much harder for many people in Scotland to meet their housing costs.

“Much more should be done by local authorities to give advice and help people meet their payments rather than simply threatening them with court action.

“We advise people that they must try and pay their Council Tax but if they are struggling, get help as soon as possible.  They should call the council and tell them they’re struggling and agree ways forward – maybe even access crisis grants. They can also call our advisers on our free national helpline or visit our website at shelterscotland.org/getadvice.”

“This is no time to tinker around the edges.  We cannot simply manage our way out of it: we must transform the system that creates poverty and inequality.” Labour MSP Elaine Smith

Labour shadow cabinet secretary for the eradication of poverty and inequality Elaine Smith commented: “These figures show the failure of the SNP and the Tories to make our economy work for working class people.

“Our economy needs radical change so that it works for the many. The richest one per cent in Scotland owns more personal wealth than the whole of the poorest fifty per cent.

“This is no time to tinker around the edges.  We cannot simply manage our way out of it: we must transform the system that creates poverty and inequality.

“Only Labour will deliver the real and radical change Scotland needs to and poverty proof our policies to ensure the eradication of poverty is at the heart of everything government does.”

Scottish Labour have also called on the Scottish Government to stick to its 2007 pledge to abolish the Council Tax. However, this manifesto commitment was derailed, after the newly elected SNP’s attempt to replace the Council Tax with a local income tax led to the UK Government threatening to withhold almost £381m in Council Tax Benefit if abolition went ahead. Then-Work and Pensions Secretary John Hutton stated in 2007: “If there is no Council Tax in Scotland there will be no Council Tax benefit. It is a UK benefit to help people with the cost of Council Tax.”

While the SNP argued that the money was earmarked for the poorest in society, and that it should continue to be paid even under a different system of taxation, the UK Government refused to budge and the SNP’s plans for local tax reform were abandoned.

Following the passage of the most recent Scottish budget however, the Scottish Greens indicated that progress on local tax reform would be necessary in order to secure their support for future budgets, with Scottish Green co-convener Patrick Harvie telling CommonSpace in March of this year: “How long are we going to wait? Until Council Tax valuations are thirty years out of date? Forty years?”

“Although full replacement of the current Council Tax will require time for consultation, legislation and implementation, the Scottish Government must now at least take the initial steps to begin the process.” Green MSP Andy Wightman

“Local tax reform is an opportunity to put local services on a sure financial footing and although full replacement of the current Council Tax will require time for consultation, legislation and implementation, the Scottish Government must now at least take the initial steps to begin the process.”

Colin Fox, national spokesperson for the Scottish Socialist Party (SSP), responded to the new data by reiterating the party’s call for a ‘Scottish Service Tax’, telling CommonSpace: ‘It comes as no surprise to the SSP to see such an increase in Council Tax arrears because during this period real wages have failed to keep up with cost of living increases.

“With one million people in Scotland now living in poverty on the one hand and the hated Council Tax not based on ability to pay on the other it stands to reason arrears will escalate.

“This ‘daughter of the Poll Tax’ is extremely unpopular with most Scots because it is unfair. It demands greater sacrifices from those least able to pay than from the better off.” SSP national spokesperson Colin Fox

“This ‘daughter of the Poll Tax’ is extremely unpopular with most Scots because it is unfair. It demands greater sacrifices from those least able to pay than from the better off. ‘The Scottish Socialist Party has long advocated its abolition.

‘We want to see it replaced with a fairer alternative, a graduated local income tax based on one’s ability to pay where the lowest income Scots households are exempt.

“Our detailed proposals for a ‘Scottish Service tax’ have been independently backed by academics and would ensure the household bill was based on ability to pay and mean the better off would pay more while lower income households pay less.

“The SNP government promised to abolish the hated Council Tax in 2007 and then reneged. Labour and the Greens also oppose income-based alternatives fearing that the rich cannot be made to pay their share.”

READ MORE: Replacing the council tax: What are the options?

In 2001, an SSP private member’s bill resulted in the abolition of warrant sales, which were used most notoriously against Poll Tax defaulters, and allowed sheriff officers to enter private properties and ‘poind’, or put a value, upon items, which would later be put up for sale to pay off the debt.

Despite the abolition of warrant sales, similar practices remain possible for sheriff officers in cases where a summary warrant has been issued, under Exceptional Attachment Orders (EAOs). In April this year, the AIB stated that it was prepared to consider how EAOs could be made simpler to employ.

The AIB also said is was considering whether the current procedure could be changed to allow EAOs to be used without a judge’s authorisation, allowing sheriff officers to threaten those who cannot pay their debts more easily.

Writing in the Herald newspaper, financial advisor Alan McIntosh warned that, if such reforms were instituted, they “could well herald the return in Scotland to a Dickensian-style system of debt recovery laws which allows people to be threatened with humiliation and home intrusion.”