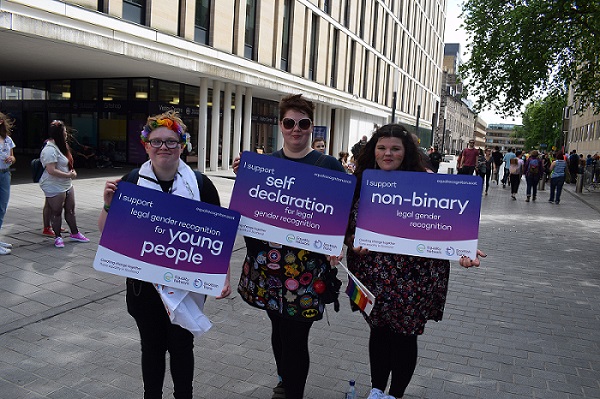 THE SCOTTISH GOVERNMENT has launched a consultation on plans to change legislation to make it simpler and less intrusive for trans people to change the gender listed on their birth certificates – a move which has been hailed by leading equality organisations.

The proposal would amend the Gender Recognition Act 2004 as it relates to Scotland, in three key areas: replacing the requirement of medical evidence with a self-declaration system (which is already the case for passports, driving licences, and medical records); reducing the age limit from 18 to 16 and considering options for under-16s; and considering options for legal recognition of non-binary people who don’t identify as male or female.

Cabinet Secretary for Communities, Social Security and Equality Angela Constance, who launched the consultation on Wednesday, said: “Scotland rightly has a reputation as one of the most progressive countries in relation to LGBTI legal and human rights equality in Europe – but we need to do more to progress equality for trans people.

“Both our Fairer Scotland Action Plan and this year’s Programme for Government commit to renewing the 2004 Gender Recognition Act. This Act was once considered ahead of its time but it now needs updated so we can ensure we are creating a fairer Scotland for those who are transgender and non-binary.

“By holding a full and wide ranging consultation we can make sure that our law is fit for purpose and in line with international best practice. This is a vital conversation and one which will ensure transgender and non-binary people in Scotland are treated with dignity, fairness and respect.”

LGBTI organisations Scottish Trans Alliance, Equality Network, LGBT Youth Scotland and Stonewall Scotland have been campaigning on the issue for some time, and welcomed the launch of the consultation paper.

James Morton, Scottish Trans Alliance Manager explained why the organisation considers the reforms so important: “The current process to change the gender on a trans person’s birth certificate is a humiliating, offensive and expensive red-tape nightmare which requires them to submit intrusive psychiatric evidence to a faceless tribunal panel years after they transitioned.

“Being able to change the gender on their birth certificate to match their other identity documents is important primarily to uphold trans people’s privacy and dignity but also to ensure that their pensions, insurance policies, civil partnerships and marriages are all administered correctly.

READ MORE: Equal recognition: How the law on gender recognition is impacting on trans lives

“We urge the Scottish Government to also provide legal gender recognition for non-binary trans people so that all trans people can have equal inclusion and acceptance within Scottish society.”

The proposal to lower the age limit for changing the gender on birth certificates to 16 is backed by the Children and Young People’s Commissioner Scotland, and aims to bring this in line with the age of legal capacity in Scotland.

“We are working with young people through our youth commission on gender recognition to bring their views and experiences to the forefront of the consultation.

“These reforms will allow all trans people, including trans young people, to live with dignity and equality.”

Women’s organisations Close the Gap, Engender, Equate Scotland, Rape Crisis Scotland, Scottish Women’s Aid, Women 50:50 and Zero Tolerance have also jointly issued a statement of support for the proposed reforms. The statement endeavours to allay concerns which are sometimes expressed that suggest a conflict between trans rights and women’s rights.

The joint statement reads: “For over a decade, we have engaged in constructive dialogue with our colleagues in the Scottish Trans Alliance, Equality Network, LGBT Youth Scotland and Stonewall Scotland.

“We do not regard trans equality and women’s equality to be in competition or contradiction with each other. We support the Equal Recognition campaign and welcome the reform of the Gender Recognition Act.

“Rape Crisis and Women’s Aid in Scotland provide trans inclusive services on the basis of self identification. We will continue to work collaboratively with Scottish Trans Alliance and other equality organisations with the aim of ensuring that new processes are appropriately designed and without unintended consequences.”

Argentinia, Colombia, Denmark, Ireland, Malta, Norway and California already allow full legal recognition through self-declaration, while non-binary documents are provided in a number of countries and US and Australian states.

The UK Government has also set out plans to reform the Gender Recognition Act as it relates to England and Wales.