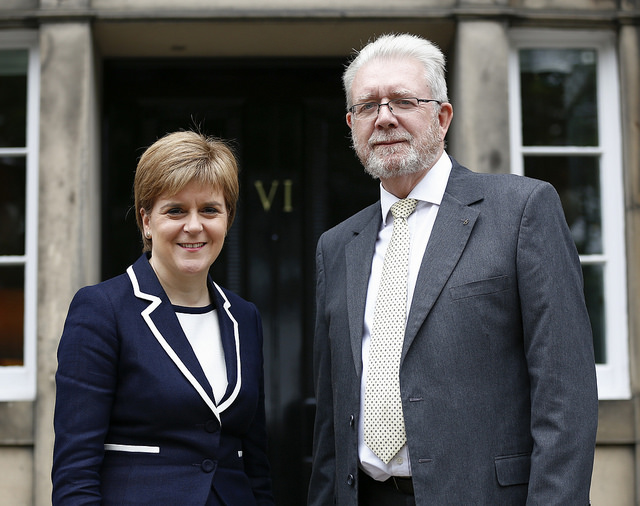 MINISTER FOR SCOTLAND’S place in Europe Michael Russell and minister for parliamentary business Joe Fitzpatrick have written to Presiding Officer Ken McIntosh explaining that the Scottish Government is developing its own Brexit bill which it will introduce in parliament in February if satisfactory amendments to the UK Government’s EU Withdrawal Bill can’t be made.

The Continuity Bill would prepare Scotland’s laws for leaving the EU, and its proposal is intended to put pressure on the UK Government to amend the Withdrawal Bill, which the Scottish Government regards as “incompatible with the devolution settlement in Scotland”.

The letter states: “The Scottish Government’s preference is to work collaboratively with the UK government on the legislative consequences of EU withdrawal, including through the EU (Withdrawal) Bill.

“Discussions continue on the potential for amendments to be made, but as things stand we need to prepare responsibly for the possibility of consent being withheld.

“It does not mean that we have definitely resolved to reject the EU (Withdrawal) Bill.  But unless and until the necessary changes to the bill are made, the Scottish Government must provide for an alternative.”

Following the recommendations of the Scottish Parliament’s Finance and Constitution Committee, the letter confirms the Scottish Government’s intention to seek quick passage of the bill, to allow sufficient time for “necessary instruments to be prepared and scrutinised”.

The implementation of such a bill would likely raise a number of difficulties both legally and constitutionally, and it could effectively be ignored by the UK Government.

Both the Scottish and Welsh Governments have raised major concerns about the EU Withdrawal Bill since its introduction in the House of Commons. Namely, that it would “re-reserve” powers returning from the EU which would normally be within the scope of the devolved powers, and that it would hand over too much power to UK ministers, while the same powers would not be given to devolved ministers.

The SNP ministers’ letter came just as Scottish Secretary David Mundell reneged on his promise to publish amendments with the aim of addressing some of the devolved administrations’ concerns.

The amendments were due to be detailed on Wednesday, but Mundell revealed that this will now be pushed back till Spring, when they will be introduced at the House of Lords.

A spokesperson for the UK Government responded to the proposed Continuity Bill: “We want the whole of the UK to come together in support of this legislation [the EU Withdrawal Bill], which is crucial to delivering the outcome of the referendum.

“Every part of the United Kingdom needs a functioning statute book, and that applies as much to Scotland as elsewhere.”