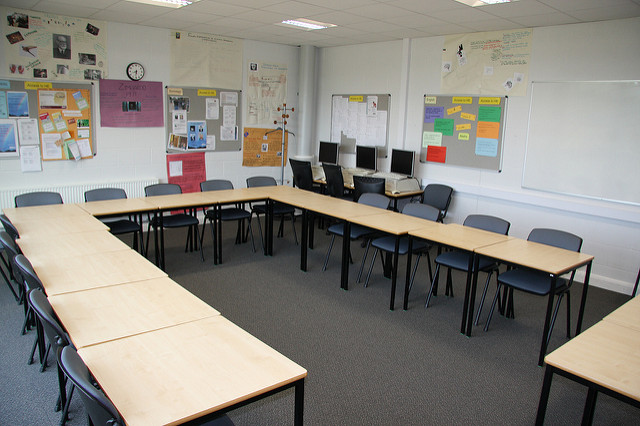 THE SCOTTISH GOVERNMENT, in its 2017-18 Programme for Government, has confirmed it is pressing ahead with several controversial education reforms in its attempt to close the attainment gap, despite criticism of the proposed policies from education experts and political opponents.

Speaking ahead of the Programme’s publication, First Minister Nicola Sturgeon said that improving the education and life chances of children and young people “remains a defining mission of this Government”.

Some of these reforms had been previously outlined by John Swinney in June, when he spoke of governance reform as a means of giving new powers to head teachers of their curriculum, and the Regional Improvement Collaboratives as a means of pooling resources.

Education has been a common point of criticism for the Scottish Government among its political opponents, and the latest proposed reforms have inspired further controversy.

“The simple truth is that there will be no meaningful local democratic accountability for education in Scotland.” COSLA spokesperson

Reacting to the proposals, a spokesperson for the Convention of Scottish Local Authorities (COSLA) told Holyrood magazine: “There can be no getting away from the fact that the Scottish Government is trying to give the impression that Scotland’s councils still have a role to play in the delivery of education when the reality is that they do not; the simple truth is that there will be no meaningful local democratic accountability for education in Scotland.”

The Programme for Government also confirmed that the Scottish Government’s key policy of increased standardised testing will apparently go ahead this year, despite criticism from Professor Andy Hargreaves, a senior policy advisor of John Swinney, who argued that standardised testing causes “ill-being” in students and devalues the judgement of teachers.

“It’s increasingly clear that the SNP’s education policy was a result of capitulation to the Conservatives.” Lecturer and writer James McEnaney

Reacting to the proposals, lecturer, writer and education policy expert James McEnaney told CommonSpace: “There’s some really exciting stuff in the Programme for Government – like the National Investment Bank, the deposit return scheme and the first steps towards tackling period poverty – all of which makes the determination to force through these dreadful education reforms even more disappointing.”

McEnaney said that if the Programme for Government was “largely evidence of successful pressure from the left, the Greens and Labour, it’s increasingly clear that the SNP’s education policy was a result of capitulation to the Conservatives.”

Referring to the Regional Improvement Collaboratives, McEnaney argued: “The SNP is keep to push the idea of a regionalised approach to education as something that’s about localism, devolving power, putting power in the hands of the schools.

“However, the fact is they are going to put government-appointed officials in charge of these regional organisations which gives them effectively direct control over what those organisations are doing.

“Those regional directors’ jobs will be to make sure that individual schools and local authorities within their region have education policies which are properly aligned to national government priorities, in this case that National Improvement Framework.

“The notion that that’s not an example of centralising power is just farcical.

“There’s absolutely no doubt it gives the government significantly more control over local education policy, and is therefore a clear example of centralisation and an obvious power grab.” Lecturer and writer James McEnaney

“It’s similar to when they set up free schools in England – the argument was it was devolving power to individual schools. But then the issue became: if money’s going straight from government to schools, who are then directly accountable effectively to the Education Secretary, then actually what the government has done is grab a lot of power for itself while dressing it up as an example of local decision-making.

“The regional bodies are a less extreme version of that.

“There’s absolutely no doubt it gives the government significantly more control over local education policy, and is therefore a clear example of centralisation and an obvious power grab.”

Regarding the proposed roll-out of standardised testing in primary schools, McEnaney told CommonSpace that the Scottish Government has confirmed it will not immediately be mandatory.

“The [Scottish] Government’s confirmed to me that these tests aren’t compulsory. If parents want to opt their children out of these tests, then they absolutely can. Now they are refusing to set out any kind of national policy for doing that – fill in this form, send this letter, whatever.”

Pressure to institute the Scottish Government’s new standardised testing assessments has intensified following the annual Scottish Survey of Literacy and Numeracy (SSLN), which indicated a drop in the standard of reading and writing.

“These tests are going to show what the government wants them to show, which is things are getting better after they’ve been introduced. It won’t be true.” Lecturer and writer James McEnaney

Commenting on the likely outcome of the introduction of further testing, McEnaney said: “They won’t raise standards, they never do, but whenever you institute a new kind of testing, you always get a boost in the figures, a perceived boost in performance over the first couple of years before it settles down after that.

“But these tests, the way they’re being introduced and the way the data’s being manipulated around how it’s going to be presented means that, almost inevitably, these tests are going to show what the government wants them to show, which is things are getting better after they’ve been introduced. It won’t be true.

Considering whether there was any possibility of the Scottish Government’s proposed education reforms being slowed or abandoned, McEnaney answered: “There’s no prospect of the SNP slowing down or reconsidering it. Nicola Sturgeon, having stood up in a room full of journalists and said ‘I want to be judged on this’, in a rare moment of opportunistic hubris, she is never going to turn around and say that the big flagship policy, which everyone other than the Tories told her was a mistake, is in fact a mistake and they’re not going to do it.

“It would take some enormous intervention or atrocious scandal or massive failure of the system to convince them to hold back now. I think that ship has sailed, sadly.”