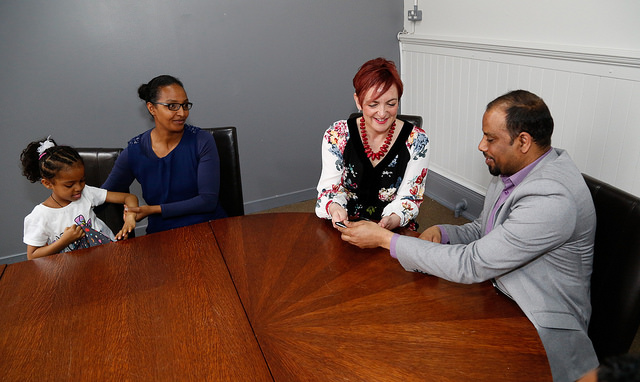 REFUGEES COMING to Scotland under family reunion rules will now be able to arrange financial support before their arrival through Family Reunion Crisis Grants.

The new £100,000 scheme launched today [9 May] by the Scottish Government aims to support people with living costs and essential items upon their arrival, removing the delay caused by UK benefit assessment rules.

At present, people cannot apply for benefits until they have arrived in the UK, a circumstance which the Scottish Government has said is unfair and potentially harmful to those coming to Scotland as refugees.

Equalities Secretary Angela Constance said: “Too many people arriving in Scotland under family reunion arrangements are forced to start their new life in abject poverty because they cannot apply for support until they arrive here.

“When you consider that these people have been separated from their families, have fled their home – often under threats of violence and death – that is not acceptable.

“Scotland is a welcoming country and we want everyone who chooses it as their new home to be able to do so with a sense of safety, security and hope for their future here.

“We firmly believe in supporting refugees from the day they get here and these grants are an example of how we can provide practical support for people to get back on their feet and take their place as valued members of our communities.”

Earlier this year, a bill introduced by SNP MP Angus MacNeil passed its second reading in the House of Commons, which would expand the definition of family members permitted to come to the UK under reunion rules, and to reintroduce legal aid for refugees in England and Wales. The UK is one of very few countries which only allows spouses or children under 18 to join refugees.

The bill is backed by Amnesty International, the UNHCR (United Nations High Commissioner for Refugees), Oxfam, the British Red Cross, and other refugee rights campaigners, and will be scrutinised and amended by MPs before receiving a final Commons vote.

Hadgu, who was separated from his family for three and a half years before they arrived in Scotland in March this year, emphasised how important this reunion and the financial support he has been able to access via the British Red Cross has been for him. “Nothing makes me happier than to be reunited with my wife Helen and my three daughters,” he said.

“The Red Cross have been great supporting me with crisis grants and have been helping me find new accommodation as we’re now over crowded in our small flat.”

Phil Arnold, Head of Refugee Support for the British Red Cross welcomed the Scottish Government’s decision to introduce their own crisis grants for people in Hagdu’s situation. “Being with family is one of the most basic instincts that people have, and this is no different for refugees,” he said.

“By introducing grants for newly reunited families, we can make sure they face a more certain future together, and remove the risk of refugee families falling into destitution or homelessness.”

Arnold said that families with children were at particular risk of experiencing financial hardship due to the need for larger accommodation and because it takes longer to process Child Tax Credit than other benefits.

“This is a real risk and it is particularly concerning because they place additional strain on reuniting families at a critical time recovering from their individual and collective ordeals, when the family just wants to get on and rebuild their home and family life together in Scotland,” he added.