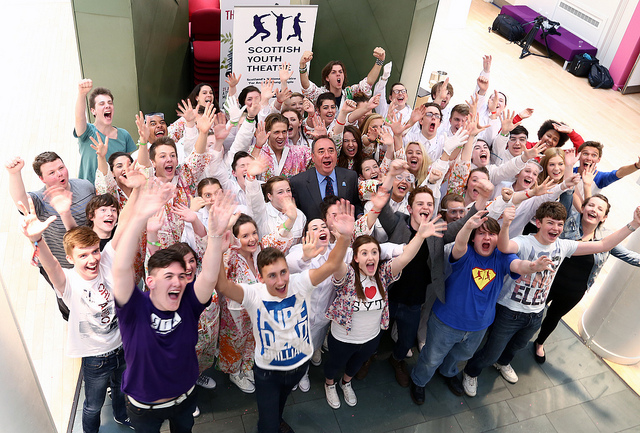 FOLLOWING THE Scottish Youth Theatre’s (SYT) Announcement on Wednesday that it would close its doors in July after 41 years due to a failure to secure regular Creative Scotland funding, the first minister has said the Scottish Government will “explore all options” to secure the theatre’s future.

Scottish Youth Theatre learned in January that it had not been chosen to receive regular Creative Scotland for the next three years, a decision which it says will leave it with a gap of a third of its required income.

Successful Scottish actors such as Gerard Butler and Karen Gillen have benefited from SYT in the past. A chorus of such celebrities have urged action to save the theatre, including Kate Dickie of Game of Thrones, Morven Christie of Doctor Who, The A Word and Grantchester, and Sam Heughan of Outlander.

First Minister Nicola Sturgeon responded to calls to consider providing support to SYT at First Minister’s Questions on Thursday, announcing that culture secretary Fiona Hyslop would meet with the organisation early next week to “see whether there is some action that the Scottish Government could be party to that would help to secure a future” for the theatre.

Describing the announcement of SYT’s proposed closure as a “serious concern”, Sturgeon said: “While I can’t give detail about what those options might be, today I certainly give a commitment that we will do everything we can to fully explore all options to allow young people in the future to benefit from the Scottish Youth Theatre in the way that young people in the past have done.

“There will always be difficult decisions on funding to be made and I think sometimes Creative Scotland is unfairly criticised because they have to make these decisions, but we want to make sure that theatre, and youth theatre in particular, can flourish not just in this year but generally in Scotland.”

In November 2014, after SYT initially lost its Creative Scotland funding, the Scottish Government provided £1m to allow the organisation to continue its work over the next three years.

While the Scottish Government cannot legally tell Creative Scotland who to fund, Scottish Green Party co-convener Patrick Harvie said that it had a duty to protect a national asset of this kind.

“To lose our national youth theatre company in the Year of Young People is a national embarrassment.” Scottish Greens co-convener Patrick Harvie

He said: “The Scottish Youth Theatre has unquestionably enriched and even transformed the lives of countless people throughout Scotland. It continues to produce world famous talent, and more importantly works with countless young people to give them a chance to learn, grow and develop their own creativity. Are we really going to let this national treasure close?

“SYT has operated for more than forty years has been a brilliant outlet for the creative energies of what must be tens of thousands of young people over the years, at the very least. To lose our national youth theatre company in the Year of Young People is a national embarrassment.”

Harvie was scathing in his remarks about Creative Scotland in light of the decision, which it described as “a public body which has lost the confidence of so many in the creative sector”, and noted that the funder had done well out of the recent budget process.

SNP MSP Sandra White joined Harvie in his criticism, saying that the Creative Scotland decision had been a “big slap in the face and kick in the teeth”.

Former first minister Alex Salmond has added his voice to calls to renew the support which the Scottish Government gave to SYT three years ago. He said: “I thought the SYT well merited support back in 2014 given the incredible role it has played with young people and indeed the number of stars whose careers it has nourished over the last 40 years.

“Funding decisions are always difficult but I would hope that, even at this stage, a similar initiative can save the day once again.”

Scottish Labour MSP Claire Baker MSP suggested that it was “embarrassing for the government” as well as for Creative Scotland to see the Scottish Youth Theatre close in the Year of Young People.

She said:  “The Scottish Youth Theatre has seen many of the country’s most successful talents tread their boards. This opportunity cannot be lost to future generations.

“If the Scottish Government are serious about 2018 being the Year of the Young People then the first minister must now step in and secure the future of the Youth Theatre.”

Scottish Youth Theatre said it had been “overwhelmed by all of the kind words and messages of support” it had received since its announcement, and that it would be meeting with the Scottish Government on Monday.

Creative Scotland said that it was “disappointed” by SYT’s plans to cease trading and that it had been in discussions with the organisation regarding “alternative routes to support”.