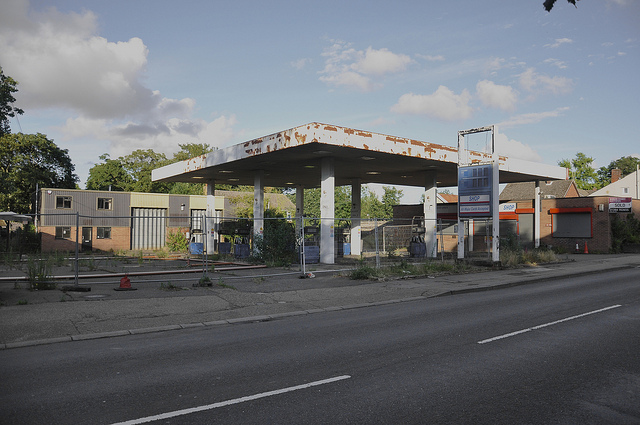 FRIENDS OF THE EARTH SCOTLAND (FotES) and World Wildlife Federation (WWF) Scotland have blasted the Scottish Government for failing to tackle air pollution and called for the ban on petrol and diesil cars to come into force by 2030.

The UK Government’s proposal to ban new fossil-fuel cars by 2040 was welcomed, but air quality is a devolved issue and campaign groups hit out at the Scottish Government’s lack of action in relation to air management.

Emilia Hanna, air pollution campaigner for Friends of the Earth Scotland, said: “We urge the Scottish Government to show its commitment to tackling both the air pollution and the climate crises by using the Climate Bill to phase out fossil fuelled cars by 2030 at the very latest.

“Air pollution is a public health crisis which is killing thousands of people early every year, so a ban on sales of fossil fuelled vehicles in 23 years time is simply not good enough. Like the Scottish Government’s pledge to reduce sales of petrol and diesel cars and vans to 60 per cent by 2032, today’s announcement is kicking urgently needed action into the long grass. Air pollution is a national disgrace in Scotland, and so far, the Scottish Government has shown a remarkable disregard for public health by its highly unambitious plans.

“Air pollution is a national disgrace in Scotland, and so far, the Scottish Government has shown a remarkable disregard for public health by its highly unambitious plans.” Emilia Hanna

FotES’s view was backed up by WWF, which agrees the timescale should be more ambitious.

Gina Hanrahan, acting head of policy at WWF Scotland, said: “This is welcome news from the UK Government, but the clean-up needs to happen much faster.  That’s why we’re calling on the Scottish Government to include the phase out of new diesel and petrol cars by 2030, 10 years earlier than proposed by Westminster, in the forthcoming Climate Change Bill.  Ending the dominance of fossil fuel vehicles will reduce emissions, clean up our polluted air and tackle a public health crisis.”

Furthermore, FotES attacked the government’s lack of ambition in setting up of “low emission zones” as it has proposed to oversee just one of these areas by 2018. This is despite there being 38 reported cases of local authorities recording high air pollution levels throughout the country.

For purposes of European guidlines, Scotland is split into six different zones for air pollution monitoring and four have been found to be in breach of EU law for unsafe carbon dioxide levels. Edinburgh urban area, north-east Scotland (Dundee and Aberdeen) and central Scotland (which covers most of the central belt and Fife) were granted a five-year extension in 2010 to address dangerous emission levels, so have effectively been breaking EU law since 2015.

The Glasgow urban area zone should have reached safe levels by 2010 and EU law requires that if the deadline was missed, then air quality plans must have been produced to show how the nitrogen dioxide legal limit could be achieved as quickly as possible in order to protect public health. 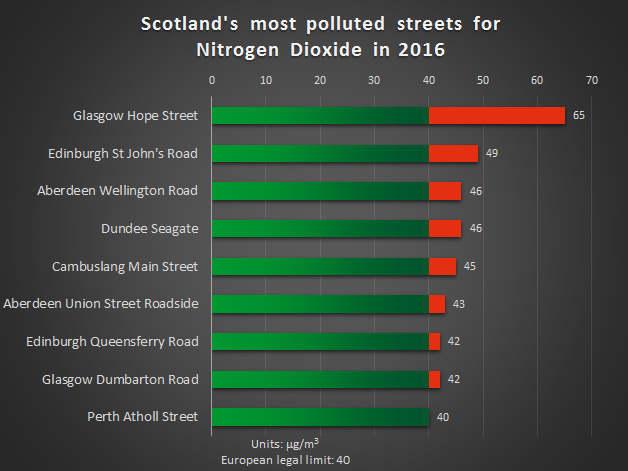 Hannah said: “The (Scottish) Government is planning just one low emission zone to be introduced next year, yet there are a total of 38 cases in Scotland where local councils have recorded dangerous levels of toxic air, spanning 14 local authorities. Edinburgh, Glasgow, and Aberdeen councils are all willing to introduce local low emission zones, but the Scottish Government needs to urgently commit to funding the zones, and must support all local authorities who are willing to tackle this health crisis.

“Air pollution targets the most vulnerable in our society, with children, the elderly, and people with other health disabilities suffering disproportionately. Pollution has been linked with heart attacks, strokes, cancers, and even mothers giving birth to babies prematurely and with reduced birthweights. This is a social justice issue and the Scottish Government’s failure to act will cost hundreds of lives.

“Air pollution targets the most vulnerable in our society, with children, the elderly, and people with other health disabilities suffering disproportionately.” Emilia Hannah

“Traffic is the key cause of air pollution, so we need a cleaner and fairer transport system where walking, cycling, and using public transport are properly supported. In Scotland, this means creating more low emission zones, more funding support for walking and cycling, and fixing the mess of our bus services through introducing re-regulation.”

John Finnie, Scottish Greens MSP, said: “The focus will now be on the Scottish Government who must decide if they will allow Westminster to set the pace, or if they are to be bold and show real vision for a carbon free future. It’s not enough to say they’ll take care of pollution and people’s health in 23 years’ time.”

But Environment Secretary Roseanna Cunningham defended the government’s strategy, saying: “No-one should be in any doubt about the Scottish Government’s determination to improve air quality and fight climate change.

“We want to achieve a dramatic increase in the percentage of ultra-low emission cars and vans on Scotland’s roads and it is encouraging to see the UK Government follow our lead.Our Cleaner Air for Scotland strategy sets out how we plan to ensure Scotland’s air quality is the best in Europe and work is already well underway to deliver Scotland’s first low emissions zone.

“Officials are studying the detail of the UK Government’s plans to phase out petrol and diesel cars and, crucially, what they mean for Scotland. We are determined to ensure Scotland continues to set an example for the rest of the UK and countries across Europe and around the world to follow.”

Picture Courtesy of Martin Pettitt, Friends of the Earth Scotland.