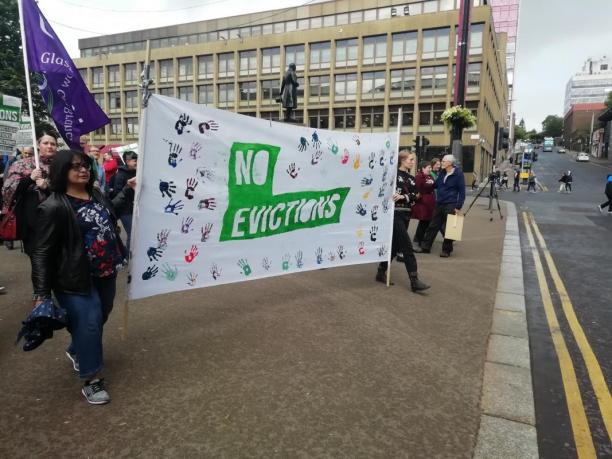 A ruling by Scotland’s highest civil court on Wednesday found that the evictions by Home Office private contractor Serco were lawful. The firm has announced its intention to complete its evictions of around 150 remaining tenants over the next few months.

The people affected are not provided accommodation support under Home Office policy because their applications for asylum have failed. However, solicitors acting on their behalf have pointed out that the application process is “not linear” and that decisions are often reversed in light of new evidence.

Campaigners have called on the Scottish Government and Glasgow City Council to take action to ensure that people are not made homeless and destitute as a result of the ruling.

Speaking in parliament at First Minister’s Questions, Scottish Green co-leader and Glasgow MSP Patrick Harvie said the decision put people at “immediate risk of street homelessness” and asked Nicola Sturgeon what the government planned to do.

Harvie said: “People like Mohammad and Khadija, a married couple in their seventies with severe health problems, are among those facing being turfed out into the streets in the middle of winter.

“Greens believe that we must treat all those who arrive on our shores seeking refuge with dignity and compassion, and I think most people in Scotland share that view.

The first minister said that she agreed with Harvie and was “horrified at the implications of this judgement” and a situation which she said was a reflection of an “inhumane asylum system”.

She said: “If lock change evictions are legal – and of course the Human Rights Act is reserved to Westminster – they certainly are not moral.

“But let’s be clear about this, we’ve ended up in this situation because of an inhumane and degrading UK Government asylum system which is leaving people destitute and homeless in the country where they have sought refuge.

“We should be giving refuge to people who are fleeing some of the worst circumstances that any of us can imagine. First and foremost we need a long-term sustainable solution to asylum so that we have a humane system in place.”

Sturgeon added that the government would “liaise closely with Glasgow City Council” to identify how best to support the people affected.

She continued: “In the meantime the Scottish Government will do everything we can within our powers to ensure that we are providing the care and help that asylum seekers need and the community secretary will be liaising closely with stakeholders to see how we can best support people who’ve been placed in this situation by an inhumane asylum system.

“Longer term – and I hope it’s not too long term – what we really need is control over immigration and asylum here in this parliament so we can build from scratch, as we’re doing right now with social security, a system that has humanity, respect and dignity at its very heart.”

Following the exchange, Patrick Harvie added that while “responsibility for this shame lies with Boris Johnson”, the people impacted would not be helped by “pointing fingers” but by putting “support in place without delay”.

Responding to the judgement on Wednesday, Govan Law Centre principal solicitor Mike Dailly said that they would be looking to political leaders in the Scottish Government and Glasgow City Council to “be bold” and “not to be cautious” in taking decisive action on the issue.

Glasgow City Council has been clear in its response to campaigners over the past several months that UK legislation, which prohibits the use of public funds for people whose application for asylum has been rejected, meant they could not provide accommodation without risking that social work staff would “face potential prosecution”.

Activist and researcher Smina Akhtar, whose PhD focuses on state racism and activism, resistance and social movements, said she felt that the council and Scottish Government could do more.

Speaking to CommonSpace, Akhtar said: “Glasgow City Council is arguing that it would be acting outwith the law if it used public funds to provide accommodation to people seeking asylum. I would argue that Social Work is a safety net, it is not a public fund – it is for vulnerable people.

“The very experiences that people seeking asylum have gone through, which have forced them to leave their own country, make them vulnerable.

“Glasgow City Council in their taskforce report which was published early this year said that no person seeking asylum who is vulnerable will be sent eviction letters.

“They didn’t keep their promise, no vulnerability assessments have been carried out, and they have recently put the onus on support organisations by saying that they must complete and apply for community care assessments.”

Akhtar said the threshold for such assessments, which are based on the Social Work Scotland Act 1968, is “incredibly high” and had resulted in “people who are ill, as well as elderly people with dementia, facing destitution through eviction”.

Akhtar said that the Scottish Government also had the opportunity to make use of “radical thinking and radical action”.

She argued: “We’ve recently seen the Scottish Government take over housing from slum landlords. There are lots of large commercial units lying empty in Glasgow: there is no reason why they cannot be turned into housing – not emergency accommodation, but permanent housing.”

Cryton Chikoko, who runs a blogging site called BaRE (Battle for Racial Equality) UK and describes himself as a “survivor of the UK Home Office’s hostile environment”, has also called on Scottish politicians to turn rhetoric into action.

He said: “The whole thing goes back to the Home Office, but let me start with the politicians in Scotland. They’re well known in parliament to say that they welcome immigrants to this country. Well, now here’s a decision where people can do tangible things to help refugees and asylums seekers here in Scotland.

“Now [the people affected by this ruling] have nowhere to go, they’ll be in the street, they have no food, nowhere to sleep.

“I think it’s time for the city council to show really that they love immigrants. We hear the politicians talk about it – these candidates for parliament who are now campaigning – they talk about ‘Scotland loves immigrants’.

“But I think this is an opportunity now to see a real reaction to this horrible judgement which will affect so many lives in this country.”

A grassroots campaign against the evictions, No Evictions Glasgow, was established earlier this year by activists from Migrants Organising for Rights and Empowerment, The Unity Centre and Living Rent, along with a number of individuals and Serco tenants.

No Evictions Glasgow said that it rejected the court’s decision and would “now look to Glasgow City Council to provide immediate and dignified accommodation to those facing street homelessness in the midst of this crisis”.

The group said it would continue to hold Serco to account for its “rogue approach”, despite the “pitiful court decision”.

A spokesperson said: “We are calling on people in our network and beyond to prepare for mass protests and civil disobedience in support of our neighbours, friends and families who will be punished by the brutal actions of Serco and the Home Office.”

No Evictions Glasgow has said it will also continue to hold Mears Group, the new contractor responsible for the provision of asylum accommodation in Glasgow, accountable for its previous public commitment not to change locks without a court order and pressure the firm to “to further commit to no lock changes under any circumstances”.