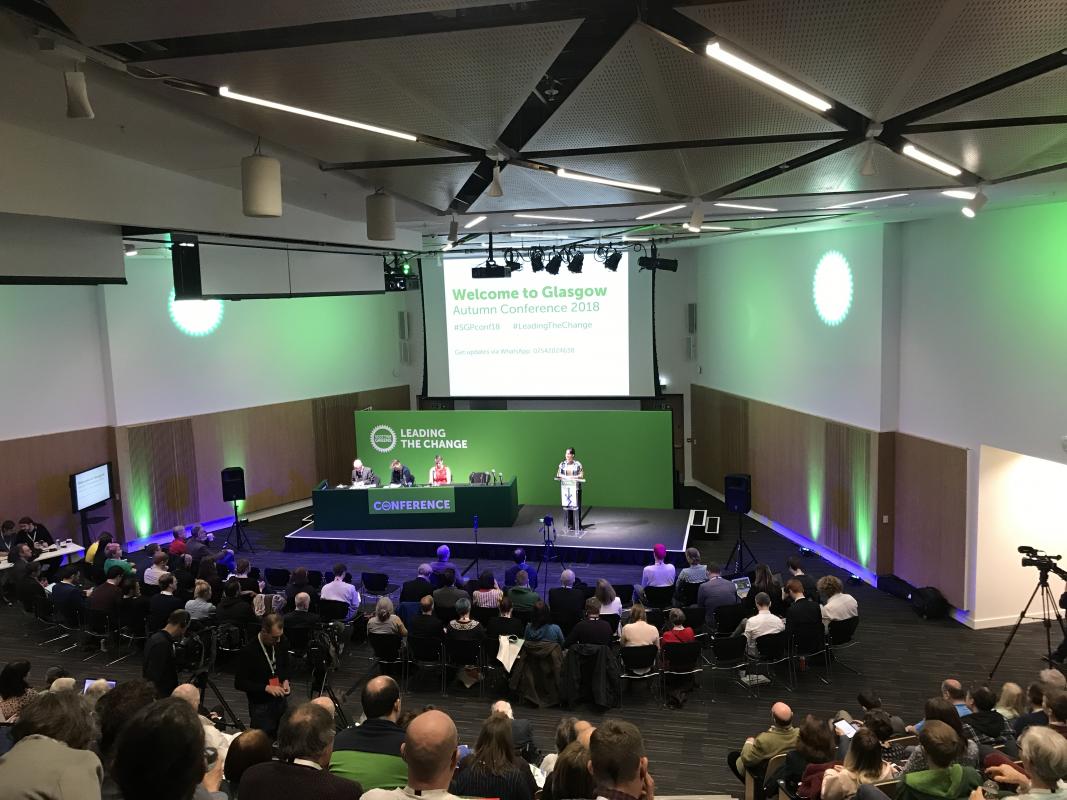 The Scottish Greens backed a UK wide vote on any Brexit deal before leaving the European Union at their annual conference in Glasgow today, as 700,000 people marched in London for the ”People’s Vote’.

Delegates backed a motion describing the Brexit process as “a shambles”, overwhelmingly rejecting three amendments, including one that would place conditions on having the People’s Vote and one outright opposed to a UK-wide vote.

Patrick Harvie, co-convenor of the Scottish Green Party, said: “The events of the next few weeks and months will pose a critical threat not only to the immediate prospects for our country and for our neighbours but also to the future of our democracy and Scotland’s Parliament.

“Scottish Green Party members have said unequivocally that voters in the UK must have the final say on any Brexit deal or no deal. We can now look forward to campaigning with our Green colleagues throughout the rest of the UK for a People’s Vote.”   Patrick Harive

“Scottish Green Party members have said unequivocally that voters in the UK must have the final say on any Brexit deal or no deal. We can now look forward to campaigning with our Green colleagues throughout the rest of the UK for a People’s Vote.”

The motion was proposed by the Highland and Island branch of the Scottish Greens who said that after two years of negotiations to leave the European Union, that the UK is “no further forward”.

A delegate from the Highland and Islands branch said: “I believe that the referendum on the final deal is critical because as it stands, there are far too many unknowns.

“Following a campaign of lies, personal ambition and no prospectus it is not surprising that over two years later that there is no clear vision on the post-Brexit UK.

“Government ministers continue to bicker, squabble and write critical reports, the architects of Brexit have fled the scene of their crime and undermined their own leader from the backbenches.

“Parliament is itself divided on Brexit, and party loyalty seems to be nothing, and there is no clear direction.

“All the while the Prime Minister damaging all little authority that she has left and we all suffer as a consequence.”

The three amendments that were put forward to the motion include concerns about “breaches of electrical law on spending limits by the Leave campaign and the serious allegations of mass mishandling and disinformation during the EU membership referendum” that undermined the legitimacy of the Brexit process.

Other amendments include supporting a Brexit deal referendum on the condition of allowing the people of Scotland to have another independence referendum and ensuring it would not set a precedent for ratification referendums in the future.

Finally the third amendment, which argued that in event of getting the Brexit deal referendum that the party should demand a Scottish independence referendum, was also rejected.

But Scotland Yard said that they could not estimate the size of the crowd.

The Prime Minister, Theresa May, has already ruled out a Brexit deal referendum.