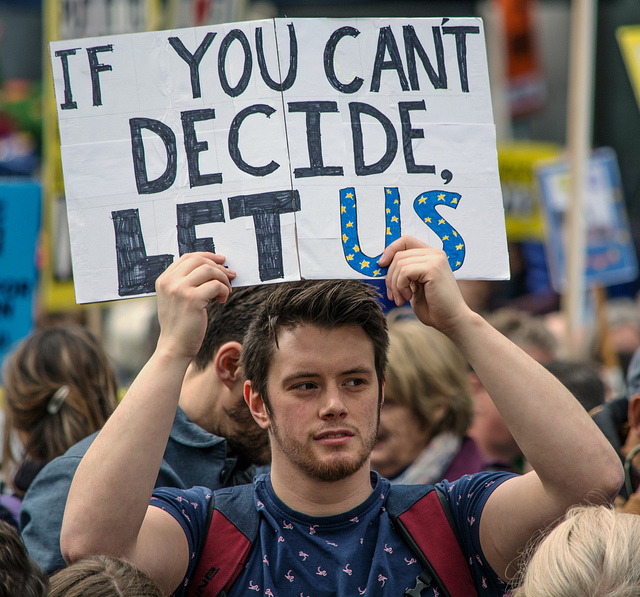 THE Scottish Greens’ co-convener Patrick Harvie MSP will bring a vote to the Scottish Parliament on 27 March, calling for the UK’s notification under Article 50 of the treaty of the EU to be withdrawn, unless Prime Minister Theresa May yields to a People’s Vote and secures an extension to the Brexit process.

The news came as the SNP backed an amendment which passed in the House of Commons on Monday [25 March] night that will see a series of indicative votes on the next steps of Brexit, including the option of a second EU referendum.

This follows First Minister Nicola Sturgeon and SNP Westminster leader Ian Blackford’s participation in a massive London March on 23 March in support of a People’s Vote on EU membership, and an online petition in favour of revoking Article 50 gaining over five million signatures within a week of its launch – a groundswell of support that caused the UK Government’s e-petition website to crash several times.

In the face of this mounting pressure, Theresa May – in a statement the SNP have characterised as showing “contempt for parliament” – said that she “cannot commit to delivering the outcome” of indicative votes, and reiterated her opposition to a People’s Vote.

“It’s clear that people are not going to allow the Tories to drag us into a hellish hard right Brexit.” Scottish Green co-convener Patrick Harvie MSP

Commenting on the upcoming Green vote in Holyrood, Patrick Harvie said: “The people of Scotland voted overwhelmingly to remain in the European Union. The Scottish Parliament has repeatedly sought compromise in order to mitigate this impending disaster, yet the Prime Minister has failed to listen at every stage. She finds herself desperately scraping around for the support of the ERG fanatics and the reprehensible DUP.

“Many people across the UK are now waking up to the crisis before us, with over one million marching in London at the weekend and many millions more making their views known by signing the petition to revoke Article 50. It’s clear that people are not going to allow the Tories to drag us into a hellish hard right Brexit.

“The UK Government is in shambles. The Prime Minister must seek a longer extension in order to put the question back to the people. If she is unwilling to countenance this, the only option remaining is to revoke Article 50 unilaterally.”

In 2018, a cross party group of politicians led by Green MSPs Andy Wightman and Ross Greer won a case in the European Court, which ruled that the UK could unilaterally withdraw its Article 50 notification at any time prior to its exit from the EU.

While the Scottish Greens have shown their support for a possible People’s vote since their last party conference in October, Harvie now says that while a second referendum is his party’s first choice to prevent Brexit, a unilateral revocation of Article 50 may be the only viable option given the present time constraints.

Regarding their support for the Commons amendment, SNP Westminster Leader Ian Blackford MP commented: “The UK has a Prime Minister that is in office but not in power. Theresa May’s time in Number 10 is up.

“Scotland’s vote and our national Parliament has been consistently ignored and Theresa May’s shambolic handling of this process makes the argument for independence clearer every day.” SNP Westminster leader Ian Blackford MP

“SNP MPs will not be forced into a false-choice between the Prime Minister’s bad Brexit deal and no-deal, both of which would be devastating to Scotland’s economy.

“Theresa May has already confirmed she may ignore the will of Parliament on next steps, showing her half-baked promises to engage in the process are meaningless.

“It’s time for Parliament to take control from Theresa May and support giving the people a say on her disastrous Brexit deal – ensuring an option to Remain is on the ballot paper.

“Scotland’s vote and our national Parliament has been consistently ignored and Theresa May’s shambolic handling of this process makes the argument for independence clearer every day.”

The SNP Westminster group’s latest intervention in favour of a People’s Vote was in contradiction to SNP MP Pete Wishart’s article in yesterday’s National, in which he strongly advocated for the revocation of Article 50 and warned of the potential dangers of a People’s Vote for Scotland and the independence movement. However, the SNP Westminster group press office refused to comment to CommonSpace on which of the two options was preferable to them.

Wishart wrote that revoking Article 50 would “end Brexit in an afternoon”, but that Scotland had not “secured any protections for our national interest in a second referendum”. He warned that Scotland’s future in the EU would be “out of our hands” and “we would have to trust a Labour Party whose leadership wants to leave the EU and can’t even say if Remain would even be on the ballot paper.”

Wishart also argued that a ‘confirmatory’ referendum would establish a precedent that would pose risks to any future independence referendum, saying: “Unionists would be working from the day after the vote to undermine that result and the UK would ensure we were given the worst possible ‘deal’ in order to try to reverse the result.”

Speaking to CommonSpace on the preferability of revoking Article 50 or a People’s Vote, a representative of the left-wing pro-Remain Another Europe is Possible campaign told CommonSpace: “There is no democratic mandate for any particular form of Brexit, let alone for No Deal. In a matter of weeks, we could be facing the cliff edge, and if this happens MPs must have the courage to do what is necessary – to ensure that we crash in rather than crashing out.

“Ultimately, our policy is still that there should be a public vote with an option to Remain. Depending on how things play out in parliament, it may be necessary to revoke Article 50 before calling a referendum – and we would support that.

“There is clearly a mandate from the people of Scotland to oppose Brexit outright, probably without another referendum, as Wishart suggests. However, for as long as Scotland remains a part of the UK, any solution to Brexit needs to be UK-wide. The Kyle-Wilson amendment or something like it is, for the moment, the only path we have.”

Adam Ramsay, the openDemocracy journalist and prominent advocate of a People’s Vote, also commented to CommonSpace: “I think that Westminster is in the middle of a crisis of sovereignty. Traditionally, people in Westminster have believed that they can legislate anything anywhere, which was basically true at the height of the empire, but is no longer true that Westminster is sovereign.

“What we’re seeing is the fallout of a shift to an assumption of popular sovereignty, with no codification of it. In that context, Westminster deciding to revoke Article 50, when people across the UK have voted for Brexit, would be hugely democratically risky, and a big mistake.

“For Scotland, it would be very damaging – if we voted for independence and it turned out to be quite hard, and we decided not to go for it, you can imagine how angry we’d all feel.

“One of the reasons I’m in favour of a People’s Vote is that it’s the only democratic way not to do Brexit. You can’t give people a vote on something, and then when it turns out to be hard, not do it, without giving them the chance to turn away from that, democratically. Although I can see the temptation.

“The problem we’re suffering from is that the UK has no serious code of its constitution. We have no precedent for doing any of these things, and we’re very bad at them. What we need is to have a codified constitution, so we know the process for doing these things.

“I don’t think it would necessarily have to be a problem to think about how we’d go about achieving independence in that context, but I think probably what we want is, in the next independence referendum, is to do it properly the first time round.”

SNP MEP Alyn Smith has previously advocated revoking Article 50, while influential SNP MP Joanna Cherry said on Newsnight on Monday night that the party’s priority was to stop Brexit, either by a People’s vote or revoking article 50.