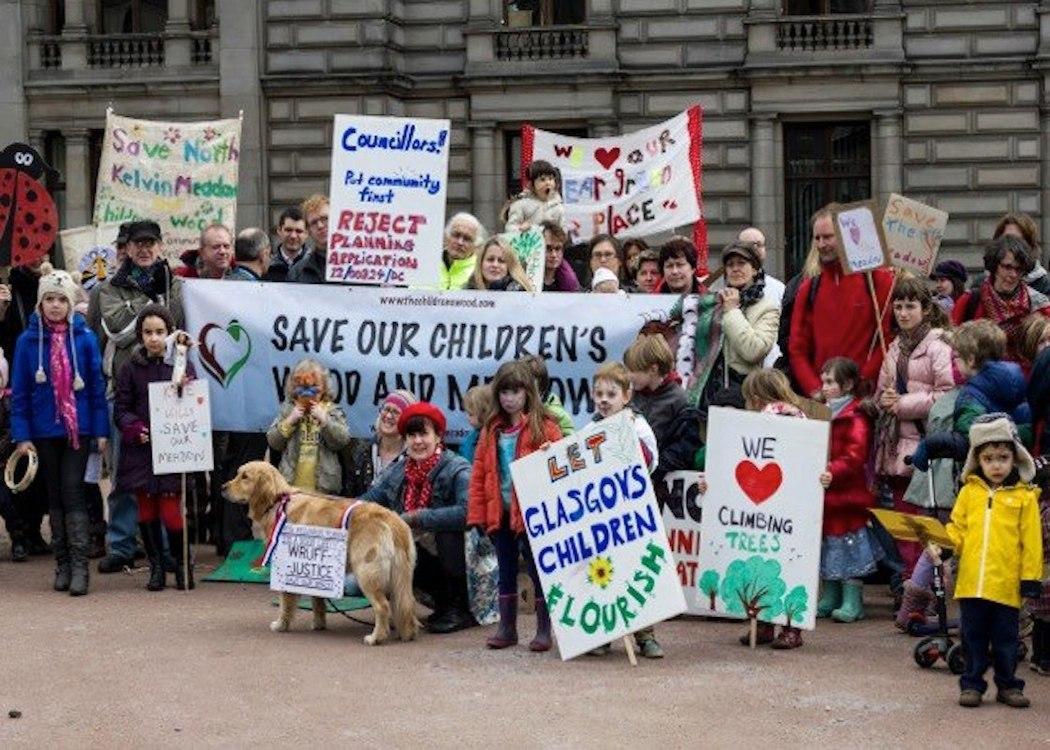 LABOUR COUNCILLORS have shown “contempt” for the people of North Kelvin, Glasgow, in their support for a private flat development on a children’s community meadow, according to the Scottish Green Party.

Kelvin Meadow, a much loved play area in the city’s west-end, has been transformed by local residents into a venue for play groups, local schools and university research.

Despite being abandoned by the council – who own the land – for 24 years, planning permission was granted yesterday [26 January] for 90 private flat units to turn the community space into a “rich enclave” for developers.

Councillor Kieran Wild, who represents North Kelvin Meadow, said: “I am extremely disappointed that the planning committee didn’t use its powers to refuse the application. There were valid reasons to do this, but the Labour councillors on the committee have forced it through against the wishes of the community.”

Wild proposed that the demolition, which the council conceded would involve uprooting the meadow’s streets and risk turning the entire area into a private space for residents, should not go ahead as it breached Scottish planning rules on protecting local amenities .

Councillors toured the site on the day of the vote, met by over 100 protesting residents and children who want to save the site.

Glasgow MSP Patrick Harvie hit out at the council for forcing through the sale: “I’m disgusted by the decision that has been made today. After years of Glasgow City Council’s neglect of the site the local community worked hard together to create something inspiring, and the council’s reaction began with threats of legal action and now ends with a promise to send in the bulldozers.

“Any local council should be proud to have a community like the people who created North Kelvin Meadow, but instead they are showing nothing but contempt. I don’t expect the local residents simply to give up, and the Greens will continue to offer whatever support we can.”

In a confusing move, the council planning committee also accepted an application on behalf of the children’s wood to maintain the site as a green space.

However, both the council planning officials and the council media team expressed support for bulldozing the site.

Yet campaigners have insistent that the issue is far from settled .

Following the meeting, the Children’s Wood said: “The Children’s Wood plan has been accepted, with conditions. We’ll immediately be launching a detailed plan. The New City Vision [private sell-off] plan also got accepted, but there are lots of conditions and it will go to the Scottish Government. Let’s hope they do the right thing and ‘Call In’ and reject the New City Vision plan. We’ll post more information soon.”

The Scottish Government have also requested to review the prospect of the private sell-off. Any government challenge to the decision would need to take place in the next 30 days.

In another quirk of the quasi-judicial process of council planning, the two Green councillors on the committee were not allowed to vote against the sell-off as they spoke out on the case ahead of the planning meeting.