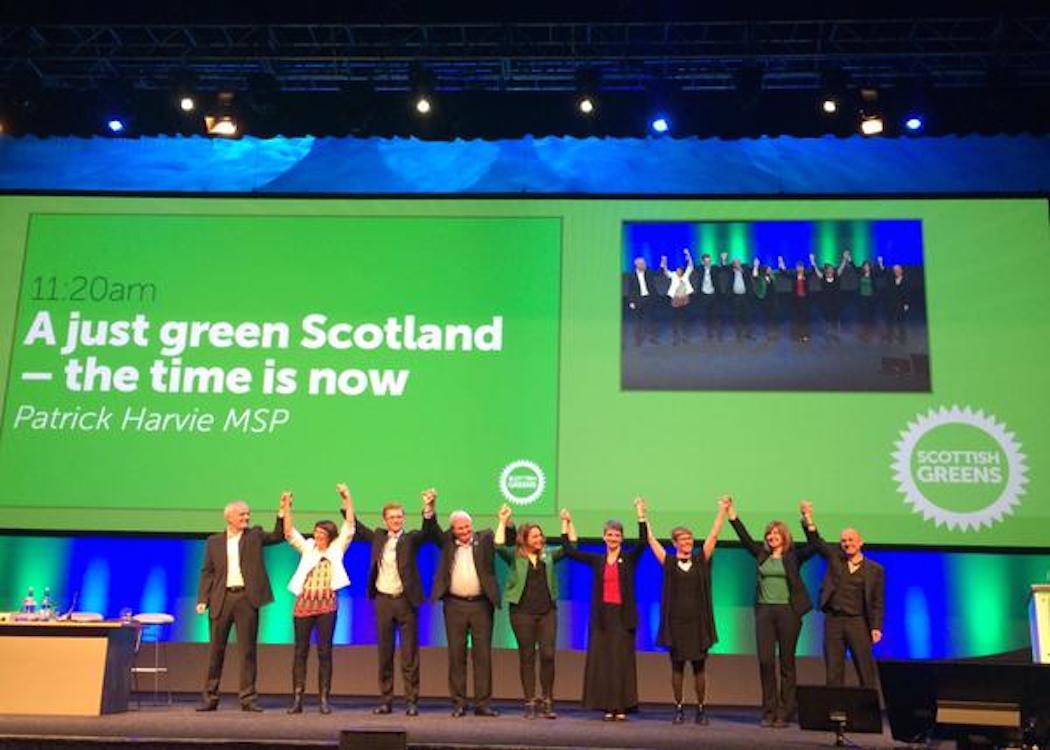 GREEN PARTY DELEGATES in Glasgow have supported policies for an independent campaign to stay in the European Union, a boycott of Israel, strong controls on the private rented sector and a new policy on space travel.

The Scottish Green Party, whose membership exploded from 1,200 to over 9,000 following the Scottish independence referendum, maintains a democratic structure where members propose and make party policy.

It’s two-day conference in Glasgow included a mammoth 54 pages of policy ideas, most of which were supported by the membership in conference votes.

A significant decision that gained almost unanimous support was the motion to campaign for the UK to stay in the European Union – but with an independent campaign.

“There was strong agreement that, despite the current challenges and the Greek situation, the European Union has an overall track record of progressive policies on human rights, environmental standards, workers rights and global solidarity. In the workshop discussion, there was near-unanimous support for a ‘Yes’ vote and unanimous support for a positively focused, distinctly Scottish Green campaign, while being honest about challenges and shortcomings in the EU.”

The motion continued: “That the Scottish Green Party should not join the official campaign to remain in the EU as we do not want to align ourselves with the other parties potentially involved in such a campaign. However, SGP Council is mandated to seek opportunities to work together, during the campaign, with progressive allies.”

Last week the Scottish Government introduced a Private Housing Bill , which was criticised for not going far enough to tackle the housing cost crisis.

The Green Party voted to back the Living Rent campaign, which wants a stronger approach to rent controls in the new bill.

“High rents, insecure tenancies and poor quality housing have an enormous public cost; directly through housing benefit and discretionary housing payments; and indirectly through the costs associated with homelessness and the health impacts of damp and cold housing. Scotland’s tenants are amongst the least secure in Europe,” the motion stated.

“In order to bring rents under control and to give tenants security of tenure, we propose the following changes: 1) That initial rents be set against a points system to reflect the value of the property 2) That rent increases be capped at a rent affordability index to ensure increases do not push tenants into hardship 3) A move towards indefinite tenancies as default, away from short-term contracts, particularly the Short Assured Tenancy 4) Ensuring that all tenants are entitled to a hardship defence in relation to evictions 5) The creation of a Scottish Living Rent Commission, to oversee these recommendations and to serve as a centre of expertise for the Scottish Private Rental Sector”

The most contentious policy debate of the weekend was over a new five-page proposal on supporting justice in Palestine and the wider peace process.

A motion, worked on by the party international committee, included supporting an independent Palestine, supporting the boycott, divestment and sanctions campaign against the “apartheid” Israeli state, and removing Hamas from the list of terrorist organisations.

After some calls to return the proposal for further consideration and questions over the length and context of the proposal, members supported the policy with strong support.

An extract stated: “The current policy on Israel and Palestine is fragmented and dated, having being added to incrementally over the years. Current policy also underplays the unequal and colonial nature of Israel’s occupation of Palestine. This revision recognises this, as well as the systematic infringements of international law perpetrated by Israel and the racist ideology of modern day Zionism.

“This new policy provides a coherent and consistent approach which updates current policy, and brings it more in line with Green principles and current thinking of Palestinian and solidarity activists.”

Party members endorsed a new policy for Greens to boldly go where no party has ever gone (environmentally) before.

To “move forward as a species” the policy supports scientific focused space travel, while urging caution on space tourism for the rich and opposing the militarisation of space.

The debate included warnings that billionaires are trying to “gain control over low earth orbit” and that the debris in space might trap humanity on Earth.

Extracts of the policy read: “We recognise the benefits of space exploration in terms of furthering our understanding of our planet and the universe.

“We are opposed to the concept of ‘space tourism’ as its environmental impact cannot be justified in terms of benefits to society, and it can only be available to the very wealthiest individuals.

“We oppose the militarisation of space, and we fully endorse the UN Outer Space Treaty (formally: Treaty on Principles Governing the Activities of States in the Exploration and Use of Outer Space, including the Moon and Other Celestial Bodies).”