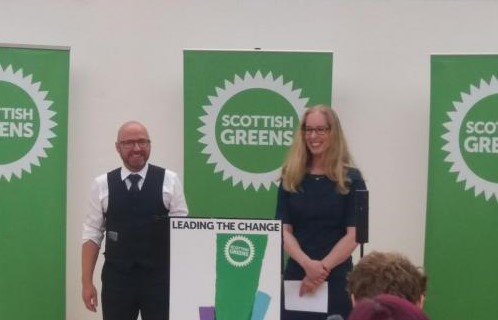 Ahead of a conference vote ruling out any electoral pact, Scottish Green co-leader Lorna Slater attacked the SNP’s environmental credentials

MEMBERS OF the Scottish Green Party have voted overwhelmingly to rule out any electoral pacts with the SNP or others at the party’s conference in Inverness today (13 October), citing the Scottish Government’s environmental record.

As the SNP and Green conferences overlapped today, the Greens took the opportunity to attack the SNP’s environmental policy with key party figures putting the SNP under fire on the issue and members urging MSPs to take a strong stance on the climate emergency in budget negotiations.

Commenting following remarks made by former climate change minister Stewart Stevenson MSP at the SNP conference today, in which he said that there would be “decades of further oil extraction”, Scottish Greens co-leader Lorna Slater said this position was “outrageous”.

Slater said: “The SNP’s world leading hypocrisy on the climate crisis has never been clearer. The science tells us that we must urgently transition to a greener, cleaner economy.

“The only thing the SNP should be talking to the oil and gas industry about is setting an end date for fossil fuel extraction, and putting in place a just transition for workers.”

Stevenson made the comments during a fringe meeting on ‘achieving net-zero’ which was sponsored by BP.

Slater added: “Inviting companies like BP – who have caused the climate emergency – to come to conference and pretend that they have the answers is deeply regrettable, and that party grandees like Stewart Stevenson are calling for the industry to carry on for decades is outrageous.

“Instead of listening to corporate lobbyists Mr Stevenson and his party should be listening to the inspiring climate strikers who recognise the science and are demanding urgent action.”

The fact that the SNP conference is sponsored by Heathrow and BP was also raised by Highlands and Islands lead candidate Ariane Burgess during the closing speech of the Green conference.

Burgess said: “Only the Greens have what it takes to deliver the transformative change that is needed in the face of the climate emergency.

“And if you want any proof, just look at SNP conference that is opening today. Brought to you by Heathrow Airport and BP, one of the biggest polluters in the world ever. Yet more proof that the SNP’s rhetoric and eye-catching but distant targets are window-dressing, serving only to stave off criticism. For all their talk of change, they are the party of the status quo.

“And while the SNP sell out to oil companies, we have worked together to develop a bold and visionary prospectus to offer the people of Scotland. The Scottish Green New Deal is our plan to address the climate emergency.”

Burgess added that the Green New Deal would “give everyone in Scotland a warm, affordable and zero-carbon home”, “put public transport in the public hands” and “rebuild the public sector by creating publicly owned banks and energy companies”.

The party’s co-leaders also put emphasis in their joint speech on taking on capitalism and making the links between economic and environmental justice.

Co-leader and MSP Patrick Harvie said: “Boris Johnson made one statement [at the Conservative Party conference] which may have been meant as a complaint, but I think we should take as an invitation. He said: ‘nobody’s talking about capitalism’.

“We’re ready to talk about it. We need to. Because it’s increasingly clear that Brexit is not, and never was, merely about leaving the EU – certainly not about the people of this country taking back control. It’s about a hard right, race-to-the-bottom deregulation agenda, from people who are obsessive free market ideologues.”

Harvie continued: “Social justice, economic justice and environmental justice are the preconditions people need in order to exercise freedom in their lives. We can only achieve those things by acting together, as a society, not individually as consumers in a market.”

The joint speech also made the bold claim that this approach can win the Greens 16 MSPs – two in every region list – in the 2021 Scottish Parliament elections, which would be the party’s best result to date and increase its current cohort by 10.

Lorna Slater added: “It takes courage to stand up and say: things are going to change. We need to do politics and power differently. We need to expect courage from our leaders.

“The Scottish Green New deal is the foundation for fundamental changes in where power and decision making lies in Scotland and it describes the positive future for Scotland that we’d like to see for our kids and grandkids.”

In another resolution passed at the conference, members voted to ensure that MSPs “turn the rhetoric of a ‘climate emergency’ into a reality” and take a strong position on this issue in negotiations with the SNP on the upcoming budget.

Following the vote, Patrick Harvie said: “I’m not surprised our members want us to take a stand in budget negotiations with the SNP.

“After all, the Programme for Government then the Climate Bill have revealed that the Scottish Government continues to set long-term targets while ducking the urgent changes that are needed now if we are going to tackle the climate emergency within the timescale that science demands.”