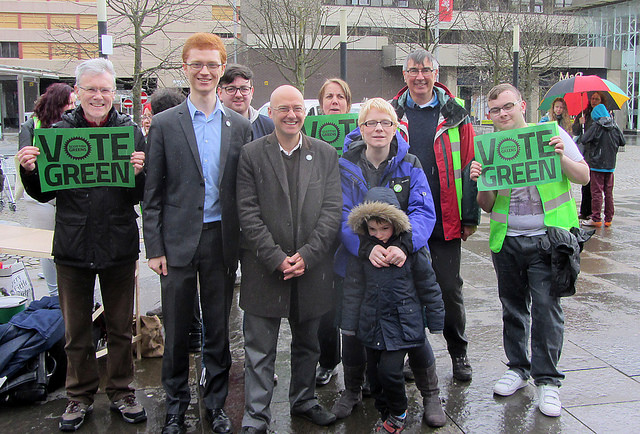 THE SCOTTISH GREEN PARTY has launched a Brexit position paper, ‘Preparing for Impact’, outlining its view on what must be done to mitigate the effects of leaving the EU for Scotland.

The paper calls for the devolution of immigration policy to protect the rights of citizens of the EU and other parts of the world living in Scotland.

The Greens also highlight the need for dramatic changes to the EU Withdrawal Bill, and say the Scottish Government must use existing powers and seek the devolution of greater powers to protect workers’ rights and environmental protections.

Ross Greer MSP, External Affairs spokesperson for the Scottish Greens, said: “Greens campaigned for a Remain vote, and Scotland resoundingly backed Remain. But our voice has been repeatedly ignored by a UK Tory Government intent on a Hard Brexit that will devastate our economy, people’s pay packets, our public services and break up families who’ve chosen to make their home here.

“While we still seek as close a tie to our EU partners as possible, Scotland must prepare to mitigate the worst effects of the cliff edge that Ruth Davidson’s party is steering us towards.”

“By devolving migration policy, Scotland can bring fairness and equality into the system.” Ross Greer MSP

The position paper argues that Scotland has been enriched “socially, culturally, and economically” by freedom of movement and notes that Scotland’s aging populations makes it particularly reliant on migration.

With this in mind, the paper asserts that EU citizens in the UK on the date of Brexit should be allowed to remain and have their current rights in the UK maintained. To protect migrants in Scotland from being subject to “harsh measures” adopted by the UK Government, the paper argues, migration and asylum policy should be devolved to the Scottish Parliament.

He said: “Demanding minimum income thresholds for family unification, expensive fees for visas, and a restrictive definition of family members is simply intolerable.”

“By devolving migration policy, Scotland can bring fairness and equality into the system, ensuring we keep hold of the economic and cultural benefits of free movement.”

The Greens also call for powers over labour regulation to be devolved to Scotland. The position paper notes that UK Governments have been forced to improve standards by EU law.

However, the paper says that the EU has also placed restrictions on protecting workers’ rights, for example where the freedom of movement of services has been prioritised over states’ ability to impose higher standards.  Leaving the EU, the paper argues, should be used as an opportunity for the Scottish Government to strengthen guidance on fair work practices.

The paper highlights the environment as another area where the EU has been a source of vital protections. It argues that all such standards should be incorporated into domestic law, devolved to the Scottish Parliament, and “must not be weakened as a result of leaving the EU”.

To enable this, the Greens say the Scottish Government “must establish a new Environmental Court to replace the functions currently fulfilled by the European Court of Justice”. The paper also calls for “a change towards sustainable farming”, to be supported by a system of agricultural subsidies in replacement of the EU’s Common Agricultural Policy.

The paper makes clear that the Scottish Greens will not vote for the EU Withdrawal Bill in the Scottish Parliament as it currently stands, due to the undemocratic nature of the extensive ‘Henry VIII’ powers it affords, its potential to “undermine devolution”, and its removal of the EU Charter of Fundamental Rights from UK law.