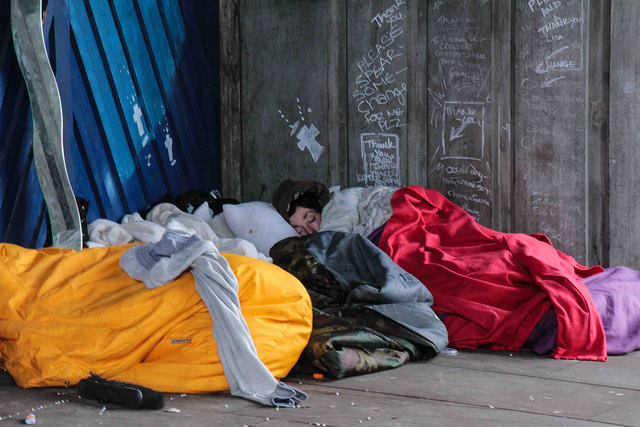 Big cities take the the brunt of Scotland’s homeless problem

THE number of homeless cases in Scotland has fallen in the last five years.

A report by Heriot-Watt University released yesterday for homeless charity Crisis showed what they call “core homelessness” to be falling overall in comparison to the rest of the UK.

Crisis credit the performance to factors such as better access to social housing, affordable homes and also the fact that benefit reform hasn’t hit Scotland with the same impact as it has in England.

“I think for this report, because it’s looking at the acute end, Scotland just doesn’t have the same issues.” Crisis

A spokesperson for Crisis said: “I think one of the main reasons is that Scotland has quite a different resistive in terms of homelessness in comparison to England in particular.

“I think for this report, because it’s looking at the acute end, Scotland just doesn’t have the same issues. There’s obviously still is a problem with homelessness but not any way the same as say in England.

“In England, there are huge amounts of people in temporary accommodation and it has got really, really got bad in the past five years. And that’s to do with the supply issue as well.

“In Scotland, not only is there more access to social housing, but the Scottish Government have also pledged to build more affordable homes. And also, you’ve not seen as much of the impact from welfare reform as England either.”

Universal Credit has been rolled out in five local authority areas of Scotland, and is expected to be fully rolled out across the country by 2020.

The figures assembled for the Crisis homeless report assessed six differing aspects of homelessness from 2011 – 2016, from rough sleepers to people who sofa surfed.

Crisis told Common Space another reason why Scotland’s homeless figures are lower that the rest of the UK is because this report was carried out across the nation.

They noted that Glasgow and Edinburgh have problems with acute homelessness but many other regions don’t.

Shelter Scotland recently posted figures showing of the 21,145 people who accessed their services over the past year, 55 per cent of them came from just five regions.

The remaining 45 per cent was spread across 27 different local authority areas.

“We have some of the strongest rights for homeless people in the world which has already led to falling homelessness in Scotland.” Kevin Stewart MSP

Despite the drop in homelessness over the last five years, the report estimated that rough sleeping is set to double in Scotland over the next 25 years.

Housing Minister Kevin Stewart said: “We have some of the strongest rights for homeless people in the world which has already led to falling homelessness in Scotland in recent years, despite challenges such as the UK Government’s welfare cuts and benefit cap.

“However, we agree with Crisis that there is more to do. Our priorities include addressing homelessness for people with more complex needs, who may be rough sleeping and for whom simply providing accommodation is not always enough, and ensuring temporary accommodation plays a positive role in improving outcomes for homeless households.

“This can only be achieved through joint working so we will continue to work with a range of partners that can affect change and tackling underlying causes of homelessness and prevent homelessness before it occurs.”