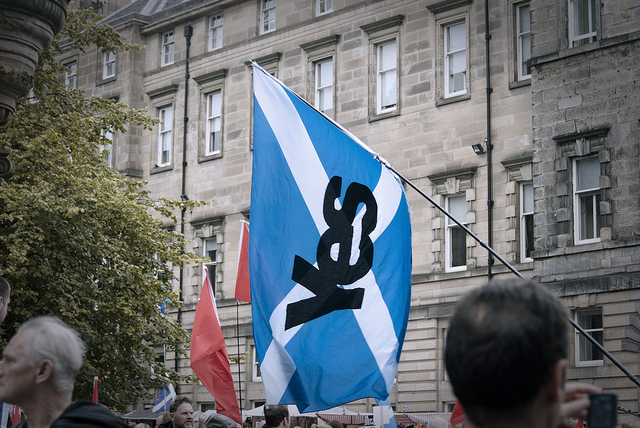 Entitled ‘Build: Bridges to Indy’ and taking place at Edinburgh’s Usher Hall on 4 November, the conference has already pre-sold almost 1000 tickets and is anticipated to be the SIC’s largest conference yet.

“This is a vital time for Yessers to come together and explore how the movement can make a co-ordinated and effective case for independence.” SIC Vice-Convenor Lesley Riddoch

Speaking ahead of the conference, Lesley Riddoch said: “This is a vital time for Yessers to come together and explore how the movement can make a co-ordinated and effective case for independence, which doesn’t ebb and flow with the electoral cycle but builds trust, confidence, local knowledge and ambition within the movement.

“There will be issues of funding, organisation, strategy and capacity to consider — my impression is that activists are more than ready to help the SIC take it on.”

Robin McAlpine, Director of the pro-independence think-tank Common Weal added: “While it may feel to some that this is a time when independence isn’t on the front pages all the time, that is exactly when it is important to do the really core work of building and developing. There’s no point waiting until everything is right upon us again.

Elaborating on the importance of the SIC in articulating and coordinating the pro-independence grassroots, co-founder of the TIE Campaign (Time for Inclusive Education) Liam Stevenson said: “Politicians won’t win Scottish independence for us – ordinary people will.

“We must engage those within our communities who are apathetic, and show them that we can build a better society – one that works for all of us. The SIC is the place where we can start to begin the process of engagement and platform for new voices with new ideas.”

The conference will begin with a focus on public research conducted by the SIC, with Heriot-Watt University’s Dr Iain Black arguing that the SIC’s study “will help inform the conference as it looks to answer questions on what the movement could and should be doing in order to organise and plan for the future.”

“You can’t issue orders, you have to let folk debate what they want.” Journalist George Kerevan

The second part of the conference will concern significant demographic groups from the 2014 reference, such as the young, the elderly, the working-class and women voters.

Dr Marsha Scott from Women for Independence and Chief Executive of Scottish Women’s Aid said: “Women’s voices – whether they are saying ‘Yes, yes, a thousand votes and I will still vote yes’ OR ‘No, you haven’t persuaded me’ OR ‘Maybe, but please don’t shout’ – are critical if we are to build a real democracy in Scotland.”

The conference will also discuss the dominant policy areas and political questions facing the independence movement, such as public finances and currency.

Journalist, economist and former SNP MP George Kerevan, who will be speaking on currency at the conference, said in anticipation: “You can’t issue orders, you have to let folk debate what they want, especially when it comes to creating a new Scottish currency. Which is why our ‘Building Bridges’ conference is so important.”

The remainder of the conference will discusses strategies for future organisation, focusing on how to achieve a closer working relationship between the SIC and local grassroots groups and activists.

“To achieve an independence movement truly for the masses, it has to be organised by the masses. The Scottish Independence Convention is that movement.”

READ MORE: Exclusive: ex-chair of Scottish Independence Convention says SNP “needs all the help it can get”

Echoing these sentiments, Anna Arqué, who in addition to her intentional activism on behalf of Catalan independence also acts as spokesperson for the International Commission of European Citizens (ICEC) said: “I’m a strong believer that popular sovereignty is the best definition of democracy and that international solidarity is the best tool to challenge imperialist propaganda.

“Despite some skewed mainstream coverage of our own referendum recently the Catalonian people have proven how powerful peaceful mass movement politics can be in affecting change and challenging the seemingly unmoveable forces that are trying to block it.

“I am very pleased to be addressing the Scottish Independence Convention and to share my experiences with the Scottish movement as there will always be things we can learn from each other’s challenges.”

In August this year, Alex Salmond suggested during his discursive show at the Edinburgh Fringe that the SNP, with no elections to fight in the immediate future, should focus on helping the wider independence movement and should consider helping to fund the non-party SIC.

Tickets for the SIC conference can be bought here.