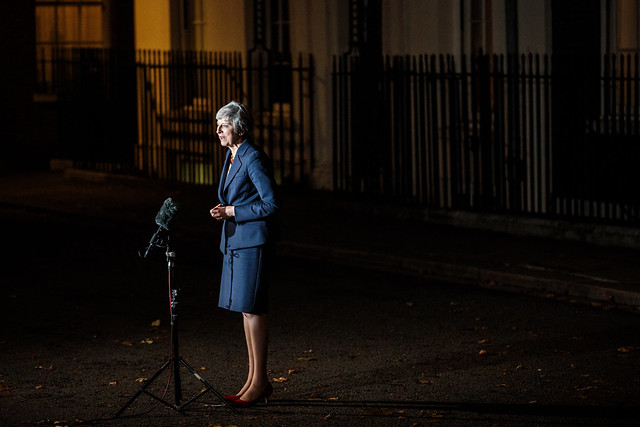 YouGov polling leaves Ruth Davidson isolated within the Conservative Party, as Brexit is found to be a higher priority amongst the membership than protecting the Union

THE TORY membership would be willing to accept Scottish independence, significant damage to the UK economy and Nigel Farage as prime minister in order to deliver Brexit, according to the latest YouGov poll.

The poll revealed that 63 per cent of Tory members would rather Brexit took place, even if it led to Scottish independence. 59 of them felt the same about Northern Ireland leaving the UK.

A further 61 per cent would accept “significant damage” to the UK economy to ensure Brexit, while 54 per cent would rather the Conservative Party be destroyed than not leaving the EU.

A majority of those polled – 46 per cent to 40 per cent – would also be happy with Nigel Farage taking over the reins of their party, and by extension the UK Government.

The only scenario under which the Tory membership would accept Brexit being abandoned would be if it resulted in Labour leader Jeremy Corbyn becoming prime minister.

“Tory members are so determined to deliver a damaging Brexit they are happy to watch our economy collapse and open the door of number 10 for Nigel Farage to take control of the UK.” SNP depute leader Keith Brown

Amidst speculation that a victory for Boris Johnson, current frontrunner in the Tory leadership race, could boost support for independence in Scotland, the new figures have caused discord amongst the unionist parties, with Labour and the Liberal Democrats accusing the Conservative Party of being a threat to the Union.

The SNP has responded by condemning the Tories’ “Brexit obsession” and highlighting the apparent isolation of Scottish Tory leader Ruth Davidson.

SNP depute leader Keith Brown MSP commented: “The Tory party has clearly gone off the deep end – with their Brexit obsession pushing the party further towards the extremes.

“Tory members are so determined to deliver a damaging Brexit they are happy to watch our economy collapse and open the door of number 10 for Nigel Farage to take control of the UK.

“And far from prioritising the union, it’s clear Scotland means so little to the members of the Conservative and Unionist Party that two thirds are happy for Scotland to become independent if it secures Brexit.

“And with this poll suggesting that almost a quarter of Tory members in Scotland would prefer to deliver Brexit for their membership down south even if it means an end to the Union it’s becoming clearer that Ruth Davidson has little authority in her party in Scotland. This poll is an utter disaster for her and shows that her authority is seeping away at an incredible rate, leaving her increasingly isolated.”

Brown continued: “Scotland didn’t vote for this Tory government – yet our future currently sits in the hands of small number of extreme hard-line Tory members.

“It is truly frightening to think these are the people that will be choosing the UK’s next Prime Minister.

“Scotland deserves much better than this. Westminster isn’t working and the only way to protect our interests is to escape this toxic political system by taking Scotland’s future into our own hands.”

Also commenting, the Shadow Secretary of State for Scotland, Labour MP Lesley Laird said: “The biggest threat to the Union today is the Tory Party. Their members and their MPs would happily trade tearing our country apart in return for a chaotic no deal Brexit.

“Nationalism in all its forms is preventing us from dealing with the issues that we face as a country. The UK is not working for far too many people. That is why we need to invest in our people, our communities and our public services across the UK.

“Only Labour is committed to standing up for Scotland’s place in the UK and against a no deal Brexit.”

Scottish Liberal Democrat election campaign chair Alex Cole-Hamilton MSP also said: “The Conservative party is hopelessly cavalier with the future of the United Kingdom. This poll is a damning indictment of Conservative priorities and a humiliation for Ruth Davidson.

“What’s more, not a single Scottish Conservative MP has joined her in endorsing Sajid Javid. What ever happened to their claim to be strong and united?”