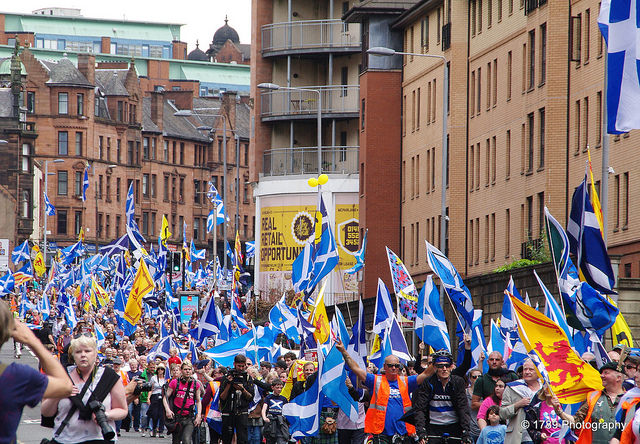 PRO-INDEPENDENCE events will be held in Glasgow as the anniversary of the Scottish referendum draws near.

Hope Over Fear (HOF) are holding a rally on George Square on Saturday from 11 am – 5 pm.

The event dubbed “Spirit of Scotland – indyref2 rally on the road to freedom” will host speakers and music as Yes supporters look to capture the spirit of the 2014 campaign.

“Freedom for Scotland to build a new, fairer, nuclear free and peaceful country.” Hope Over Fear

A post on the groups Facebook page states: “Three years on our spirit remains undaunted, our demand remains moderate, our cry remains consistent – freedom for Scotland to build a new, fairer, nuclear free and peaceful country.”

A march for independence will also take place through Glasgow city centre. The walk will gather at Holland Street at 10 am, before setting off at 10.30.

The route will take it through the heart of the city that will finish on Glasgow Green.

Organisers had hoped to disperse from George Square, but claim they were refused permission by Glasgow City Council (GCC) to do this.

The march, hosted by All Under One Banner (AUOB) and Scotland Land of the Brave Saor Alba (SLBSA) , will instead peacefully comply with GCC restrictions.

A post on SLBSA states: “One more sleep [till] we unite clan Scotland with a march through Glasgow’s streets. Let’s be heard, more [than] likely last march this year.”

“The group are also asking everyone to attend that supports independence, no matter who else will be there as they bid to end internal quarrels within the movement.” Scotland The Brave Saor Alba

“Slight change of route after refusal by GCC to allow march to finish at freedom square or march would not be approved. After march we have a great option of [a] big display via the streets of Glasgow enforced by GCC. This we should use to our full advantage, as organisers we had no option but to comply in [the] interest of public safety.

“The group are also asking everyone to attend that supports independence, no matter who else will be there as they bid to end internal quarrels within the movement.”

AUOB said: “We urge each and every true Scot to attend the day’s proceedings to show Unity in the Scottish Independence movement.

“AUOB completely supports HOF towards this momentous day and we have been demonstrating our support by working closely with Scotland Land of the Brave Saor Alba (SLBSA) who are organising their first ever Public Procession; the March for Independence on the morning of the Rally which will leave Holland street and traverse the streets of Glasgow arriving into Freedom square.”

CommonSpace understands that Hope Over Fear notified the council and were granted permission to use George Square.

In relation to opposing SLBSA’s request to use George Square as a dispersing point, a Glasgow City Council spokesperson said:  “We asked the organiser to change their route, as George Square was already in use.”