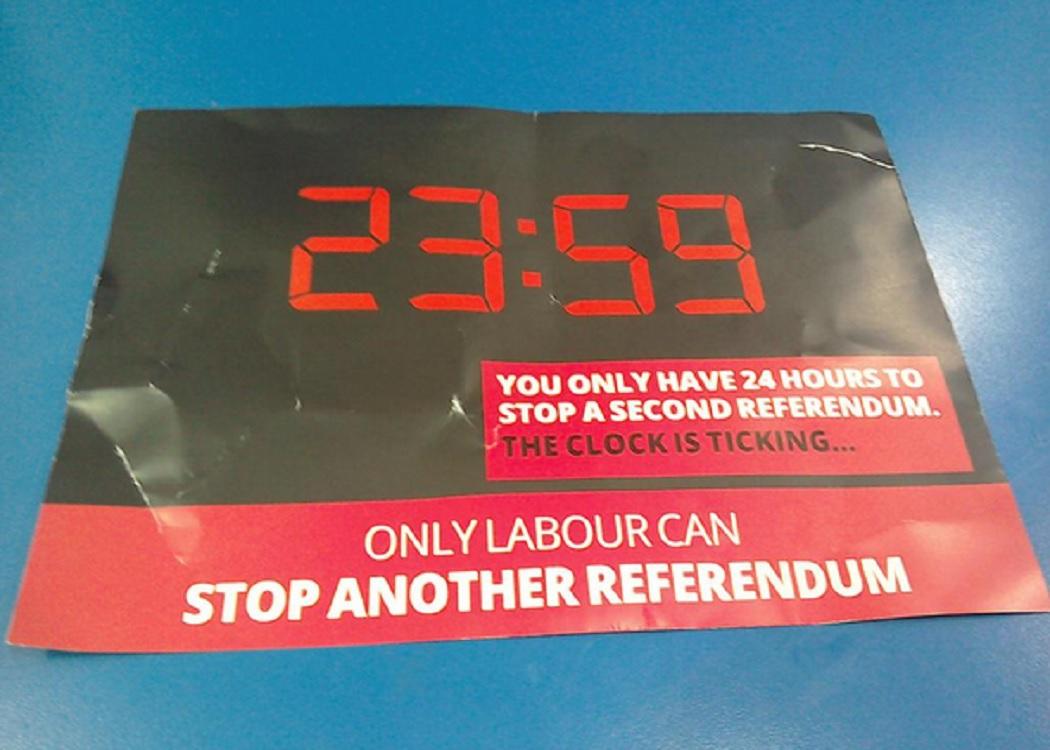 SCOTTISH LABOUR has confirmed that a controversial leaflet circulating on social media is official party material and will be produced for the final day of the election campaign.

The front of the leaflet leads with “23:59” in an alarm-style font, with “you only have 24 hours to stop a second referendum – the clock is ticking” written underneath, and in bold writing at the bottom: “Only Labour can stop another referendum”.

Scottish Labour leader Jim Murphy’s tactics have shifted since the beginning of the General Election campaign, as polls turn increasingly bad for the party in Scotland.

The party was originally targeting Yes voters who voted Labour in 2010 at first, but has shifted tact to focus on winning tactical no voters who don’t want a second independence referendum.

SNP leader Nicola Sturgeon has said that this election is about making “a stronger Scotland”, not independence, and the party did not include a referendum on Scottish independence in its manifesto.

Sturgeon has said that, “as it stands”, a referendum won’t be in its 2016 manifesto either, unless there is a “material” change in circumstances, such as a UK exit from the European Union.

Twitter responded to the ‘clock is ticking’ leaflet with bemusement and ridicule.

Is this the worse thing that could happen ? Really? Is this the 11th hour terror strike ? An #indyref? pic.twitter.com/QgQ125ImCJ

Leaflet is rumoured to be Scottish Labour’s day before polling day trump card. If it is they’ve truly lost it. pic.twitter.com/AOoQBHtEAc

Rumours Labour will junk their 24 hours to stop a referendum leaflet and opt for this image instead… #GE15 #VoteSNP pic.twitter.com/NMYB0bm0gm

Rumours Labour will send this leaflet out next Wed. Odd omission of ‘Scottish’ in name. Can @scottishlabour confirm? pic.twitter.com/XHI4PQQIXO