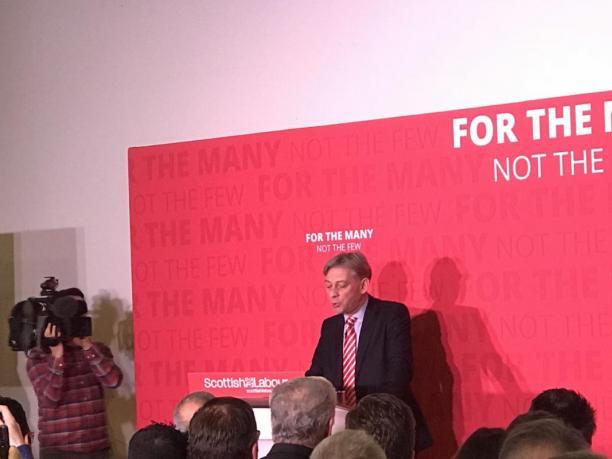 As SNP mock shadow chancellor’s lack of defiance to Tory tax cuts, Richard Leonard says raising the higher rate threshold “should not be a priority for the Scottish Government”

RICHARD LEONARD has attempted to distance Scottish Labour from shadow chancellor John McDonnell’s recent insistence that Labour would not oppose Tory tax cuts for higher earners announced in this week’s budget, instead arguing that raising the higher rate threshold “should not be a priority” in Scotland.

However, the Scottish Labour leader stopped short of explicitly condemning McDonnell’s remarks, but rather highlighted the need for a “distinctive” tax policy in Scotland in an attempt to reframe focus on Scottish Labour’s earlier commitments.

Leonard’s intervention is the latest indication of a growing Labour backlash against the shadow chancellor’s controversial response to Chancellor of the exchequer Philip Hammond’s pre-Brexit budget, which brought forward a Tory manifesto pledge to increase the higher rate threshold to £50,000 and the personal allowance to £12,500 by a year.

“Income tax is devolved and raising the higher rate threshold should not be a priority for the Scottish government, we need a distinctive tax that meets the needs of the people of Scotland.” Scottish Labour leader Richard Leonard

Analysis by the Resolution Foundation published on Tuesday (30 October) showed that the cuts announced in the UK budget would cost the UK Treasury almost £2.9 billion and were much more preferential to wealthier households, with almost half of the resultant giveaway going to the top 10 per cent of earners.

Responding to Hammond’s announcement, McDonnell stated: “We’re not going to take money out of people’s pockets. Simple as that.”

McDonnell’s acceptance of the Tory tax cuts surprised and dismayed many within Labour, with MP David Lammy stating: “These tax cuts leave a bitter taste in my mouth because they help high earners in the City far more than my constituents in Tottenham, some of whom this winter will be facing the choice between eating and heating. I believe it is a mistake for the Labour party to support this policy as it will lead to more inequality, not less.”

Why not present entirely the same programme as Blair / Brown did in 1997, then? Corbyn and McDonnell have been highly effective at reframing the economic debate. To backtrack now — *over a tax giveaway to the rich* — isn’t just bad economics, it’s politically ill-conceived. https://t.co/4agDUGvBGd

Commenting today in the aftermath from an SNP challenge to oppose the tax cuts, Leonard said: “We want to see a Scottish budget where the richest pay their fair share to properly fund public services and tackle inequality.

“The Tories have clearly broken their promise to end austerity. Income tax is devolved and raising the higher rate threshold should not be a priority for the Scottish Government, we need a distinctive tax that meets the needs of the people of Scotland.”

Scottish Labour did not respond to direct requests for comment from CommonSpace on whether Leonard agreed with McDonnell’s earlier comments.

However, the Herald newspaper today quoted an anonymous Scottish Labour insider as saying: “After a year of blindly following Corbyn, this is finally an opportunity to prove that Scottish Labour is not a branch office.

Scottish Labour outlined it’s own income tax policy in January of this year.

Leonard argued that Scottish Labour’s proposals would make “radical” use of Scotland’s devolved tax powers to “end the failed experiment of austerity,” claiming that £960m could be raised through a redesign of Scottish taxation.

Advancing on the Scottish Government’s creation of a five-band income tax system, Scottish Labour proposed a sixth band of a 50p top rate of tax for earnings over £100,000. Under their plans, other higher rate thresholds would also be redrawn. This, Leonard claimed, would raise £540 million more than Finance Minister Derek Mackay’s proposals.

“It beggars belief that, in a time of continued austerity, the Labour party are backing a Tory handout to the wealthiest people in society.” SNP MSP George Adam

Mackay responded that the Scottish Labour plans were “riddled with blunders” and would raise significantly less money than Scottish Labour claimed, while other opposition parties criticised Scottish Labour for turning in their proposals only one day before MSPs voted on the draft budget, with the Scottish Greens arguing that Labour’s last-minute submission was “stretching the meaning of ‘better late than never’ to breaking point”.

McDonnell’s lack of defiance to the new Tory tax cuts was quickly condemned by the SNP, with Paisley MSP George Adam commenting: “It beggars belief that, in a time of continued austerity, the Labour party are backing a Tory handout to the wealthiest people in society.

“Labour voters will be so disappointed that Jeremy Corbyn and John McDonnell are lining up to endorse right-wing, trickle-down economics.”

For Halloween Labour has decided to dress up as the Tory Party ? ? https://t.co/yFm3hS6pk7

Responding to the UK budget in Holyrood yesterday, Derek Mackay defended Scotland’s “fairer” income tax system and indicated that he would not be implementing the tax cuts outlined by Hammond.

Mackay said: “I take some pride in the fact that I’ve been the Finance Secretary that’s ensured the fairest income tax system anywhere in the United Kingdom and for a majority of people they pay less tax and this is the lowest taxed part of the UK.

Mackay also derided Tory claims that the budget had delivered almost £1 billion extra for Scottish public funding, arguing that Scotland has lost out by roughly double this amount in consequence of Tory-mandated austerity, saying: “I don’t welcome the figures that have been announced by the Chancellor because it represents – just putting NHS aside for one moment – real terms reductions for the rest of Scotland’s public services.

“And in relation to the National Health Service, the Tories promised £600 million and within four months they’ve already short changed the NHS in Scotland by £50 million.

“Derek Mackay must resist delivering a tax-cutting budget for the wealthy, otherwise he must know a deal with the Greens would be impossible.” Scottish Green co-convener Patrick Harvie

Neverthless, Mackay may face further pressure to alter Scottish Government tax policy in light of the UK budget’s effect on middle-class taxpayers in Scotland, who will lose out on hundreds of pounds per year following Hammond’s announcement of a rise in National Insurance contributions. Buried in the budget’s small print, the rise would stealthily claw back roughly £2 billion for the Treasury, as well as cancelling out almost half of the proposed income tax cuts.

Mackay’s early signs of resistance to Tory tax policy was encouraged by Patrick Harvie, co-convener of the Scottish Greens, who the SNP’s minority government typically relies upon to pass its budgets.

Commenting on the UK budget, Harvie said: “Instead of a budget to repair the harm done by austerity or respond to the climate emergency, we saw a budget which once again gives the biggest tax cuts to the richest 10% and continues the reckless pursuit of an unsustainable economy.

“Derek Mackay must resist delivering a tax-cutting budget for the wealthy, otherwise he must know a deal with the Greens would be impossible.”