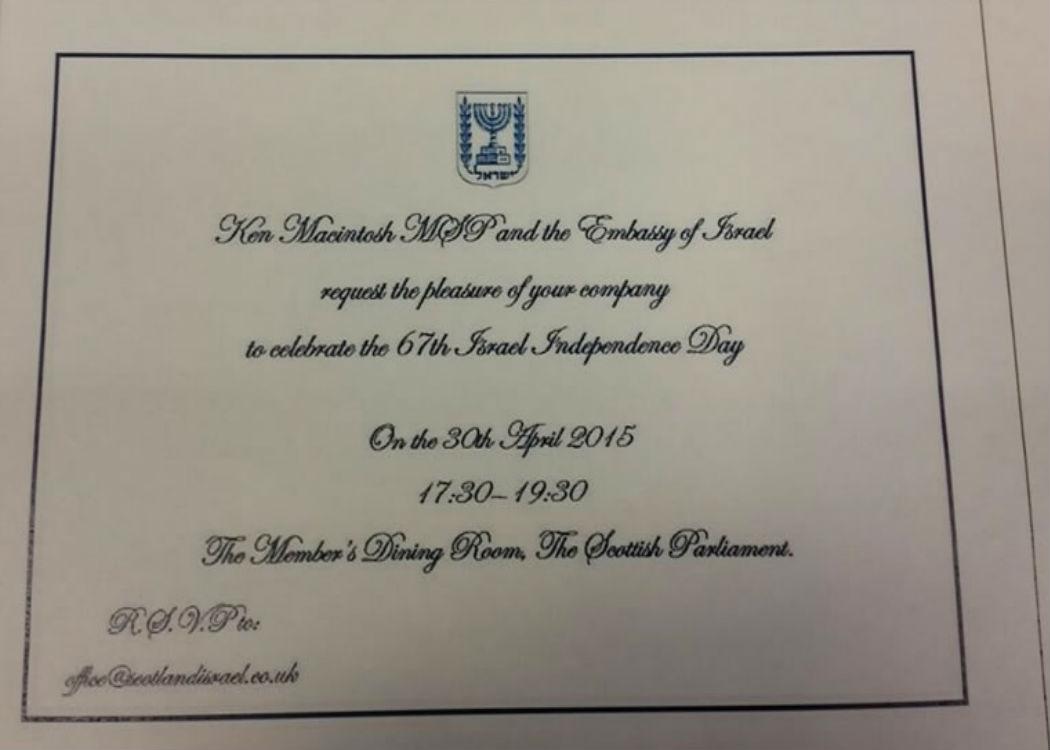 Event is an insult to the memory of Palestinians who were ethnically cleansed, say protesters

A SCOTTISH Labour MSP has been criticised for hosting a “shameful” celebration of the creation of the state of Israel.

The event to mark Israel’s 67th independence day takes place this evening (Thursday 30 April) in the Scottish Parliament and is co-hosted by Ken MacIntosh and the Israeli Embassy.

Palestinian representatives in Scotland say the event is an “affront” as hundreds of thousands of people were systematically displaced during the creation of Israel.

The events which led to Israel’s creation are referred to by Palestinians as ‘Al Nakba’ (the ‘catastrophe’) and there are now an estimated seven million Palestinian refugees.

A demonstration outside the Scottish Parliament has been called from the Palestine Alliance, a coalition of pro-Palestine groups in Scotland, to protest the event.

Independent MSP John Finnie said that he was “saddened that our Parliament is being used to celebrate Al-Nakba – the ‘catastrophe’ when the creation of Israel saw half of the Palestinian population expelled.”

“I received and ignored the invitation from the representative of a regime guilty of war crimes, whose ongoing disregard for international law and humanitarian norms is shameful,” he added.

Dr Issam Hijjawi, chair of the Association of Palestinian Communities in Scotland, said: “This action by a member of the Scottish Parliament is an affront to the people of Scotland, coming as it does, only two weeks before the Al Nakba commemoration when seven million Palestinian refugees across the world demand the right to return to their homes and land, stolen from them in 1948 as called for by UN resolutions since that time.”

MacIntosh is a close ally of Scottish Labour leader Jim Murphy, who recently said that he “will always support Israel – long after my political career is over” (click here to read more). It is unclear whether Murphy is attending the event.

Mick Napier, chair of the Scottish Palestine Solidarity Campaign, said that “what they’re celebrating is a process that saw the ethnic cleansing of hundreds of thousands of people and the creation of one of the biggest refugee issues in the world today. To celebrate that is shameful, and for it to go without protest would be shameful too.”

Anwar told CommonSpace he was “disgusted” that there had been no response to the petition, which has been signed by over 1,000 people.

“It seems to me that Anas and Kezia are not shy about claiming to be champions of the Palestinian cause yet have nothing to say when a Labour MSP organised a joint celebration with the Israeli Embassy at the Scottish Parliament.

“To celebrate the 67th Israeli Independence Day is an insult and denial of the memory of the Nakba when 750,000 Palestinians were ethnically cleansed from Palestine.”

Speaking to CommonSpace, Ken MacIntosh defended the celebration, saying: “The event is a clear statement of support for the right of Israel to exist and to celebrate its independence. Israel respects human rights and protects freedom of expression in a way that other countries in Middle East do not.”

MacIntosh said that invites for the event had been sent to all MSPs in addition to consular staff. It is not open to media or the public.