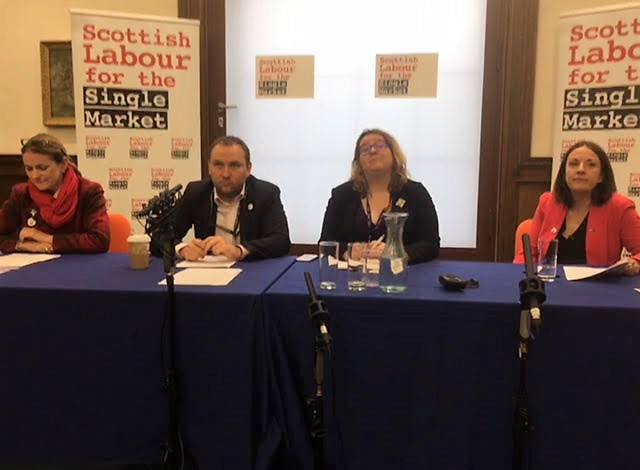 SENIOR FIGURES in Scottish Labour hosted a frank discussion on the party’s approach to Brexit on Saturday, with former leader Kezia Dugdale saying her preferred outcome would be a second referendum.

MEP Catherine Stihler also said claims some of Labour’s 2017 manifesto could not be implemented were “disingenuous”.

Delegates to the Dundee conference this weekend voted by a majority for a “unity position” issued by the party’s ruling Scottish executive committee (SEC) which aligned Scottish Labour with the UK party’s approach to Brexit negotiations, instead of a controversial motion for the Scottish party to support continued membership of the single market.

Before the vote, a fringe meeting was organised by the internal pressure group “Scottish Labour for the Single Market” set up by and co-chaired by senior figures including former Scottish leader Kezia Dugdale MSP.

Kezia Dugdale said the UK should become more relaxed on giving the people power through referenda and said the case for a second referendum on the final Brexit deal was well made.

“It is very disingenuous to claim that because of the EU we could not deliver some of our objectives.” Scottish Labour MEP Catherin Stihler

Although filled to capacity, the campaign’s fringe was not universally welcomed by delegates in Dundee. When asked by CommonSpace if they would be attending, one party figure said: “I have no interest in watching Kezia Dugdale launch her campaign to be an SNP MSP.”

Scottish Labour MEP Catherine Stihler said Corbyn’s support for a customs union was welcome but that he should go further and support continued membership of the single market after Brexit.

In his keynote address, Jeremy Corbyn claimed that single market rules would prevent Labour from carrying out its manifesto commitments, saying any deal would have to ensure Labour could “deliver our ambitious economic plans to take the essential steps to intervene, upgrade and transform our economy”.

When asked by CommonSpace if she could identify any area of the party’s 2017 “for the many” manifesto which could not be implemented in full as part of the single market, Stihler said: “I have seen so many misleading articles about [whether] you can have things like a public railway [as a member of the single market].

“It is very disingenuous to claim that because of the EU we could not deliver some of our objectives, and we have to be very strong about that.”

Katrina Murray, who sits on the party’s manifesto approval committee, also disputed Corbyn’s claims, saying that all policies could have been implemented had Labour been elected in June last year.

The Edinburgh South MP Ian Murray also spoke at the fringe, saying he was “incredibly disappointed” in Jeremy Corbyn’s remarks on immigration. Corbyn said in his earlier speech that Labour would stop employers from using immigrant labour to undercut wages.

On freedom of movement, Ian Murray said the party had “to be brave enough to stand up and make the positive for immigration”, adding that “the only person smiling” after Corbyn’s speech would have been Nigel Farage.

Responding to Dugdale’s calls for a second referendum on Brexit, the SNP’s Europe spokesperson Peter Grant MP said Scotland had already voted to remain in the EU: “Scotland voted decisively to remain in the EU and the SNP still believes it is the best option for our people and our economy.

“The Labour party, along with the Tories and Lib Dems, have failed to give any guarantees that if Scotland was to vote for a second time, that we wouldn’t still be dragged out of the EU against our will.”