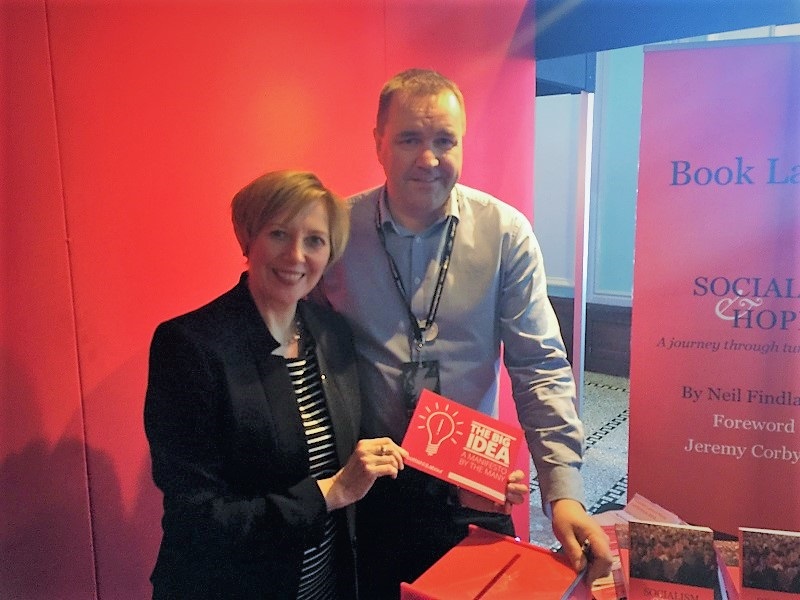 RESPONDING to Brexit and protecting the devolution settlement is the main focus of shadow Scotland secretary and interim deputy leader Lesley Laird,  speaking to CommonSpace she said she has not yet made a final decision on a run for deputy leader.

Laird, elected MP for Kirkcaldy and Cowdenbeath in June 2017, was appointed interim deputy leader of Scottish Labour in December 2017 after fellow Fifer Alex Rowley stepped down due to allegations of inappropriate behaviour.

CommonSpace spoke to Lesley Laird at the party’s conference in Dundee, just after she left the stage following Jeremy Corbyn’s keynote address to the conference where he ruled out an “off the peg” single market post-Brexit: “I think it was important today that Jeremy re-affirmed Labour as a socialist and internationalist party.”

“We are at a particularly critical point around Brexit, clause 11 and the devolution settlement.” Shadow Scotland secretary Lesley Laird

When asked about what consideration she had given to a bid for deputy leader, she said: “Honestly, I haven’t been able to give it enough consideration with so much happening and things changing almost on a week-to-week basis. We are at a particularly critical point around Brexit, clause 11 and the devolution settlement, so that has been where my focus has been and continues to be.”

First elected to Fife Council in 2012, Laird agreed that her political career has been fast moving. After being quickly appointed deputy leader of the Labour-run council, councillors from across party lines told CommonSpace she was viewed as a talented operator who handled her joint deputy leader and economy brief with ease.

“It has been a very steep learning curve since I entered Westminster after the election,” she said, adding: “One of my strengths is that my previous career in industry has given me the skills to be organised and focussed.

“It is easy to be pulled in various different directions, but we have to remain focused on our priorities.”

Although saying she had not made a decision on the deputy leadership, Laird did say that with Richard Leonard as leader, it would be right for Scottish Labour to choose to elect a woman as his deputy: “Despite legislation like equal pay, we still don’t have equality in society or in politics. I think we have reached a point where politicians need to be willing to make fundamental changes.

“We need to have a more diverse culture coming into politics, including the young people whose life is being shaped by politician’s decisions today.”

CommonSpace also asked the shadow Scottish secretary how she would help to lead the UK’s strategy to win back pro-independence voters in Scotland, particularly when the party’s position on Brexit is at odds with many of those voters values: “The new Scottish Labour MP’s have embraced our relationship with UK Labour colleagues, and we all realise how vital Scotland will be to electing Jeremy Corbyn.

“When Labour pulls together, it wins together.

“The SNP have had 6 positions on Brexit, who knows where they will end up?

“Labour’s focus is on a Brexit that is good for jobs and the economy, and that is what young people are telling us.” Shadow Scotland secretary Lesley Laird

“We are leaving the EU, and Jeremy’s interventions have so far shown a sensible approach for the whole of the UK.

“Labour’s focus is on a Brexit that is good for jobs and the economy, and that is what young people are telling us.”

Lesley Laird is not the only name rumoured to be a likely candidate for the party’s deputy leadership, with fellow MP Danielle Rowley also tipped as a future leader. At Holyrood, MSPs Jenny Marra and Monica Lennon are both highly respected by members and rumoured to be considering a bid to join Leonard in leading the party.