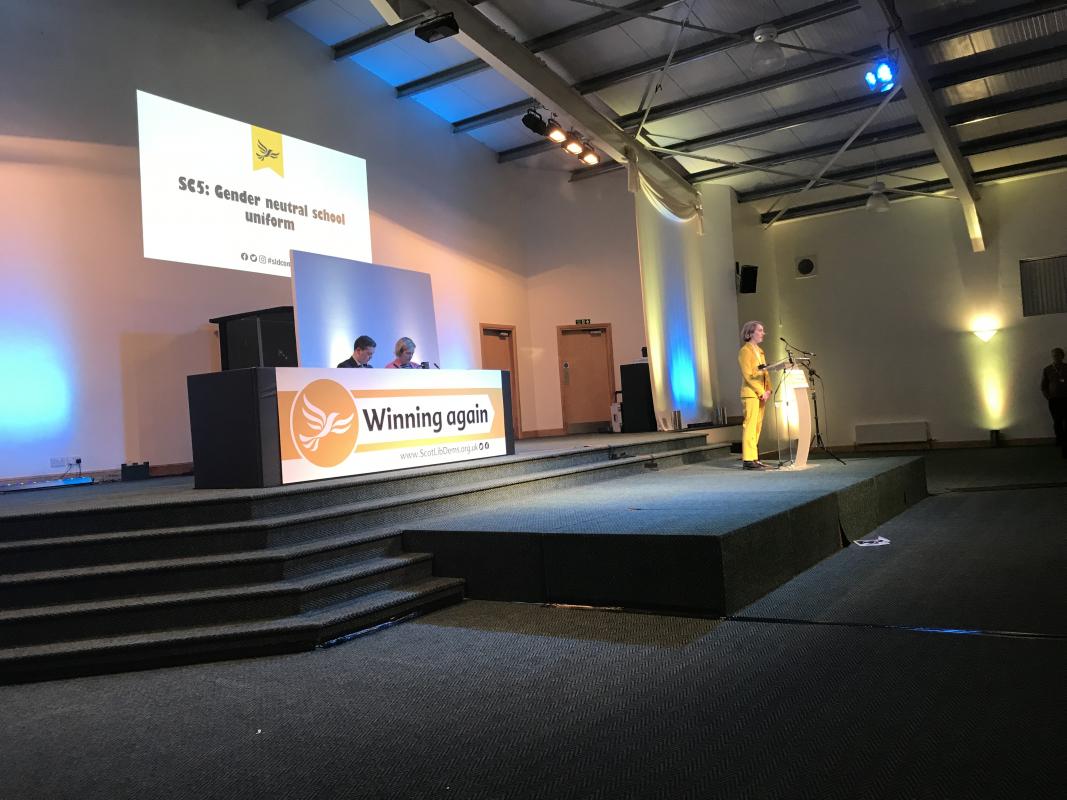 THE SCOTTISH LIBERAL DEMOCRATS passed a motion in favour of gender-neutral school uniforms at their conference in Dunfermline at the weekend.

The conference noted that “many schools in Scotland follow discriminatory school policies, where pupils are required to change their appearance based on their gender and girls often forced to wear restrictive and objectifying uniforms”.

Also, it noted that negative gender stereotypes of school uniforms was detrimental to all genders.

Scottish Liberal Democrat member Jess Insall, 15, who moved the motion, told that conference that as soon as a girl walks into a primary school, boys have more freedom than them because girls have to wear a skirt and boys do not.

“I am telling you all that pupils should have the freedom to dress appropriately for their personal identity regardless of their gender.” Jess Insall

“When pupils feel comfortably and appropriately dressed it will boost self-esteem.

“This, in turn, boosts mental health, which will mean that pupils will be happier and more productive in schools. This leads to better exam results, which would lead children to better jobs.”

Insall added: “I am angry about the harm that sexist uniforms are doing to young girls.

“I am not telling anyone to take away their skirts. I am telling you all that pupils should have the freedom to dress appropriately for their personal identity regardless of their gender.

“Instead of saying ‘girls wear this, boys wear that’ school could simply say that pupils may choose between either this or that.

“It gives the opportunity for girls to participate in physical activity.”

The Scottish Government recently published it’s Scottish Health Survey, which found that 79 per cent of boys do one hour or more physical activity a day, compared to 76 per cent of girls in the same period.

In September, research published by LGBT charity Stonewall Scotland found that 48 per cent of LGBT young people in Scotland have experienced bullying for being LGBT in schools across Scotland.

Jo Swinson MP spoke in favour of the motion said: “As liberals, we should reject the constraints of the gender stereotypes and gender-neutral uniforms are a key way of doing that.

“As liberals, we should reject the constraints of the gender stereotypes and gender-neutral uniforms are a key way of doing that.” Jo Swinson

“By removing the gender pigeonhole – that forces these difference at school, which after all children spend so much of their time it can make a real difference.

“Why should we as liberals being telling them that they can’t.”

Scottish Liberal Democrat member Calum Paterson told the conference: “I think that by encouraging gender neutral uniform kills two birds with one stone regarding freedom of expression and equality, in this case for women and the LGBT+ community in the school environment.

“I think that by encouraging gender neutral uniform really kills two birds with one stone in terms of freedom of expression and equality, in this case for women and the LGBT+ community in the school environment.” Calum Paterson

“How? Simply by helping to facilitate the freedom of expression for these people that are making a difference.

“I can understand why some people may have concerns about the interventions nature of it, but if we look at it from an LGBT perceptive for a moment, the final impact of the proposal and what it boils down to is about freedom and equality for the LGBT community in schools.”