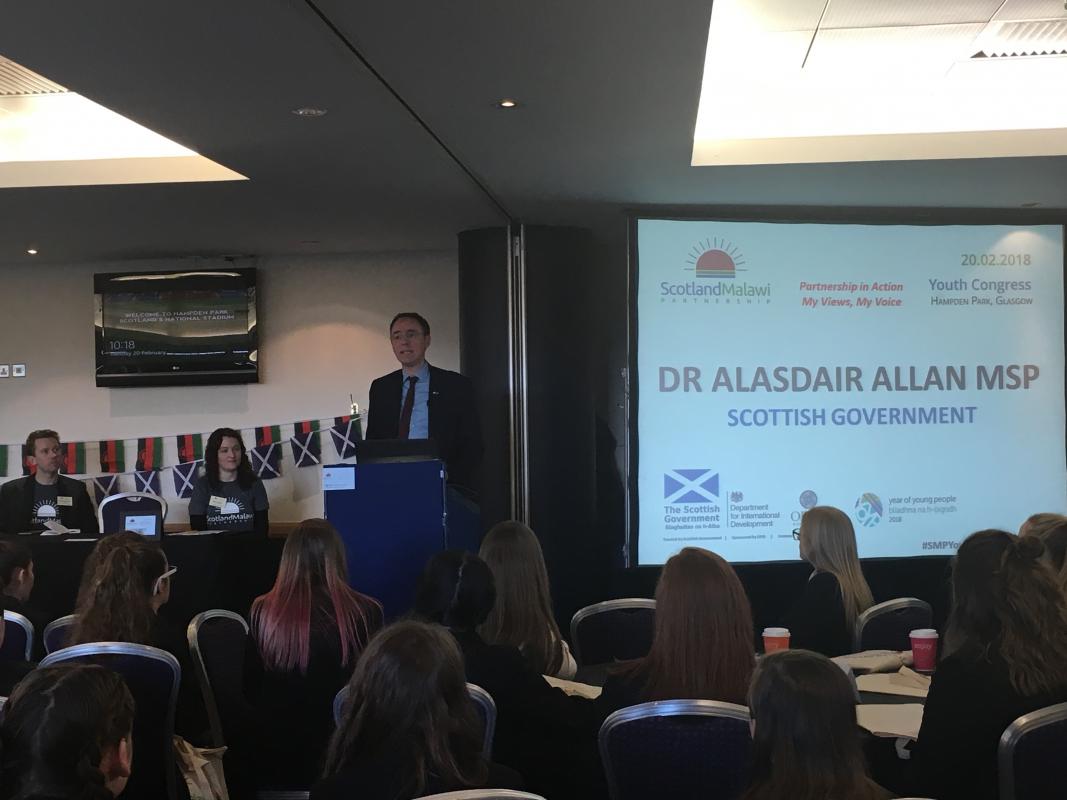 SPEAKING AT the Scotland Malawi Partnership’s Youth Congress at Hampden Park on Tuesday, Scottish Government minister for international development and Europe Alasdair Allan advised young people not to let the revelations of abuse surrounding the sector be used by politicians as an excuse for cutting aid.

First Minister Nicola Sturgeon said on Monday that the Oxfam allegations should not be used by the Tory Government as a reason for the aid budget to be “decimated”, suggesting that there was “no shortage of people in the UK Government” who would like to see this happen.

Acknowledging the recent abuse and cover-up claims in his opening speech at the Youth Congress, Alasdair Allan left no doubt over the Scottish Government’s position. He said: “What we will learn here today about Malawi is a great example of the positive work that happens in international development and we should remember these positive examples.

“And I would urge you to remember these positive examples the next time you hear a politician anywhere say that these terrible events are a reason to cut international aid and international development – they’re wrong.”

The minister shared these sentiments with a group of secondary school pupils attending the conference, which aims to support the young people to learn about Malawi, think critically about the media, and use their own voice on social media and beyond.

Allan reiterated that the Scottish Government expects the “highest moral and ethical standards” from those working in international aid and development, and that the government has sought assurances from all such NGOs in Scotland that strong safeguarding policies are in place.

However, he said: “The Scottish Government and people in Scotland recognise that the vast majority – the overwhelming majority – of those working in international development and humanitarian assistance are doing so in a diligent and good hearted and appropriate manner.”

Celebrating the strong relationship between Scotland and Malawi, Allan noted that Scotland and the Scottish Government had and continued to play a vital role in supporting people in Malawi.

He said:  “From my own visit to the country it struck me how important the work was that’s being done to provide school meals for many children in Malawi and the real difference we hope that’s making to school attendance.”

Allan continued: “Scotland is working with our colleagues and friends in Malawi to ensure there is a mental health service in Malawi.

“A very significant proportion of the psychiatrists working in Malawi today have been trained, or the funding for the training has been provided, by the Scottish Government and the Scottish people.”

With that in mind, he said: “It’s important to say we shouldn’t lose sight of these positive things.”

Allan stressed that Scotland and Malawi had a particularly positive “people-to-people relationship” because of the two countries’ long history of connections dating back to David Livingstone.

“Sometimes when Scots are around the world we have to explain where Scotland is – we don’t have to do that in Malawi,” he added.

The minister emphasised that the future of that relationship rests with young people, and that it is with this awareness that the Scottish Government chose to make Scotland the first country in the world to dedicate a whole year to young people through its Year of the Young Person.