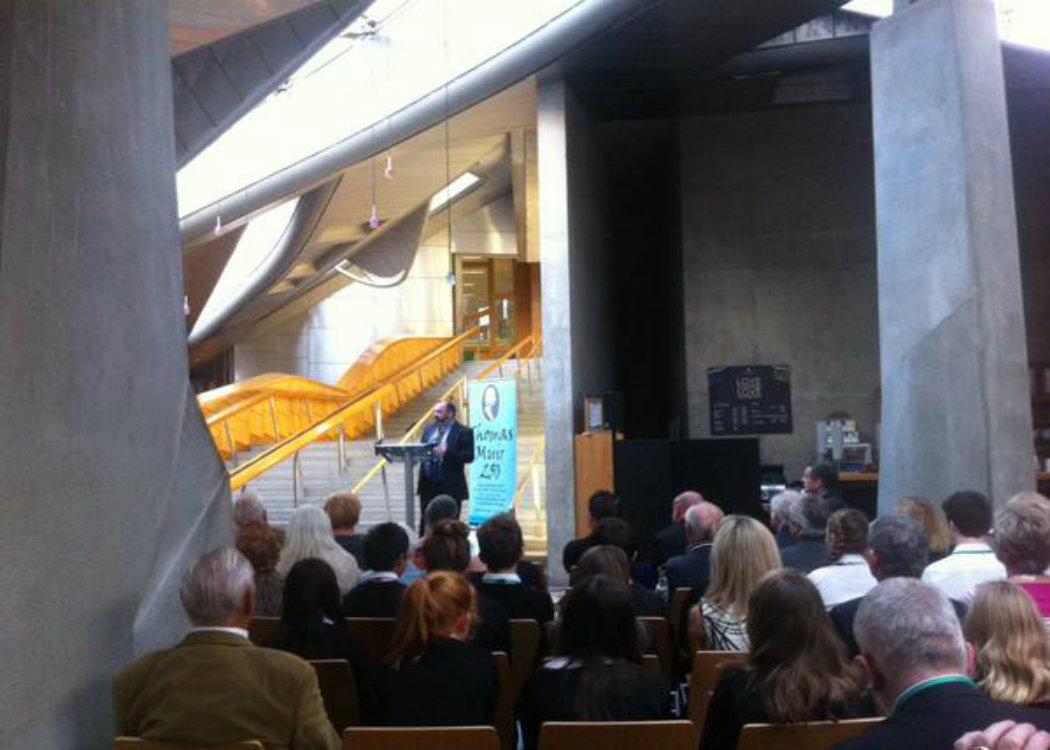 TWO HUNDRED AND FIFTY years after his birth, Thomas Muir of Huntershill, the once maligned figure of Scotland’s political history, has now been recognised by the political establishment he fought against.

Muir, who was imprisoned then exiled from Scotland for campaigning for democratic and constitutional change, was recognised in the Scottish Parliament in a ceremony to recognise his commitment to political freedoms.

The Friends of Thomas Muir society, led by Jimmy Watson from Bishopbriggs, have long campaigned for Muir’s legacy to be recognised. The event in the parliament was a centrepiece of the Thomas Muir 250 festival, which includes 19 events across Scotland from August-November.

School pupils from East Dunbartonshire, many of whom will gain the right to vote from next May, performed a musical assortment and a play to over 200 attendees.

Professor Carruthers pointed to Muir’s legacy of dissent and challenging the Scottish establishment, including the Church of Scotland, university authorities and the legal faculty of advocates.

“Broadly, what this brings out is that Muir was on the side of the ordinary parishioner and against patronage,” Carruthers explained.

“I believe his story of exile and ambition speaks to our young people. His words and beliefs live on, resonating for this generation, ensuring that we know we need not be the generation of disenfranchisement and disengagement, but the generation of change,” she said .

Thomas Muir, who for a long time remained on the margins of Scottish politics and history, has been subject to a resurgence of interest following the referendum on Scottish independence.

Salmond, who gave a short statement at the Scottish Parliament event, repeated the suggestion of the office of the first minister leaving Bute house in favour of a renamed Thomas Muir house on Calton hill.

The next major event in the festival of Thomas Muir is a march to Calton cemetery, where Muir and the Scottish martyrs have a memorial, on Saturday 3 October.