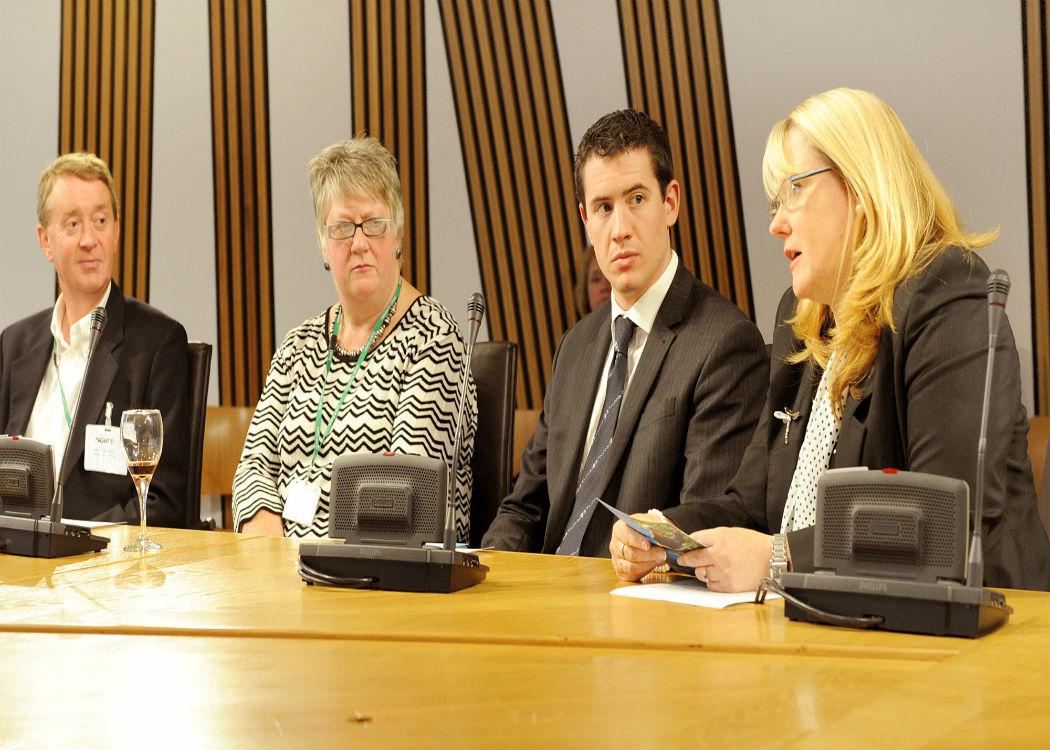 THE European and External Affairs Committee in the Scottish Parliament has called on the UK Government to seek a “double lock” to ensure the Scottish Government “would not lose authority” over public services from the trade deal being negotiated between the EU and the US, known as TTIP, in the final report of its inquiry.

The Trans-Atlantic Trade and Investment Partnership (TTIP) would be the biggest free-trade agreement in history if it goes through. It has been vociferously opposed by campaigners who believe it is a corporate power grab that would undermine public services and create a trans-Atlantic race to the bottom on issues like workers’ rights and food standards.

The Holyrood committee has been taking evidence on TTIP for months, including from UK trade minister Lord Livingstone last month, and committee chair, Christina McKelvie MSP, said that the inquiry “demonstrated to us how distant people in Scotland can feel from the decision makers in Brussels”.

“Our inquiry has allowed Scottish voices and Scottish concerns to be heard on an issue of vital importance to the future of our country. We hope that this report will help those voices to be heard loud and clear by the UK Government and the European Union in conducting these negotiations,” McKelvie added.

The committee added that it was “surprised” by the lack of knowledge or engagement in TTIP from the business community in Scotland.

The report found that the secrecy involved in TTIP “contributed to significant public distrust in the agreement”, as negotiations, at least initially, were held under lock and key.

On the economics of TTIP, the report found that while TTIP could boost Scottish exports to the US, “we have reservations about some of the assumptions relating to economic growth that have been used in support of the agreement.”

The report added that some sectors may contract in the face of increased competition “with a negative consequential effect on employment”.

A CommonSpace investigation into the impact of TTIP on jobs found that the evidence presented by the European Commission to justify the argument that the EU would see a significant jobs boost from TTIP was based on dodgy data modelling from think-tanks ideologically motivated to support free-market trade deals (click here to read more).

The committee added that it was “surprised” by the lack of knowledge or engagement in TTIP from the business community in Scotland. CBI Scotland neglected to provide a submission on the impact of TTIP.

The committee argued that “any disputes should be resolved in accordance with the legal systems and processes of the country concerned”.

The committee was “unconvinced” of the case for the highly controversial Investor-State Dispute Settlement (ISDS) mechanism, which would be an international corporate court for resolving disputes between corporations and nation-states, the decisions of which would be binding on governments.

The committee argued that “any disputes should be resolved in accordance with the legal systems and processes of the country concerned”.

On public services, the committee reported that this was a “key concern” of those who gave evidence, particularly in relation to NHS Scotland.

Despite attempts at reassurance from the UK government and the European Commission that public services would be safe from TTIP, the committee remained concerned “about the definitions of public services and whether the reservations contained in the final agreement would protect the full range of public services that are delivered in Scotland”.

The committee will seek to investigate further into the potential impact of TTIP, including looking at CETA – the negotiated trade deal between Canada and the European Union which TTIP is modelled on – in order to determine whether the protections promised by the EU and UK government in TTIP are in place in that trade deal.

Liz Murray, from Global Justice Now Scotland, part of an international movement for social justice, said much of the committee’s report was “encouraging”, but added that the Scottish government should oppose “the whole of TTIP”.

Murray said: “It’s encouraging to see that the committee has taken on board the widespread public concern that TTIP threatens hard won laws to protect the environment, workers and food, as well as public services. It’s obvious that having secret courts that would allow transnational companies to sue the Scottish government over legislation designed to protect the public and the environment is an assault on democracy, and it’s good that the report recognizes that.

“TTIP is more than just a trade agreement – it’s an unprecedented transfer of power from democratically elected governments to transnational corporations. It’s a threat to the sovereignty of the Scottish government. And while it’s welcome that the committee has voiced serious concerns, there needs to be a strong and vocal opposition to the whole of TTIP from the Scottish government in order to safeguard democracy, the environment and vital public services.”