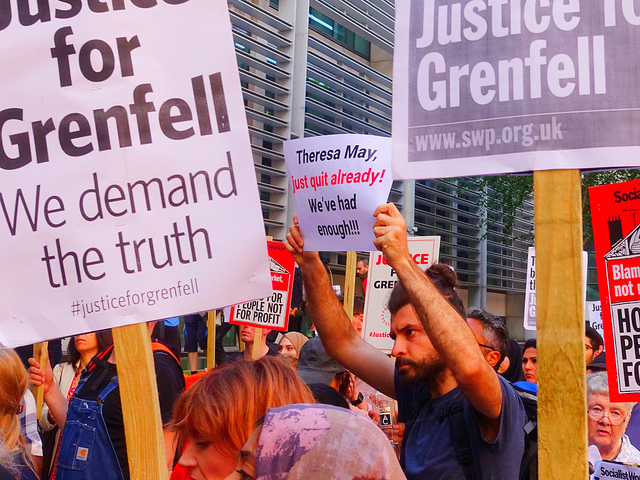 THE SCOTTISH PARLIAMENT’S local government and communities committee will broaden an existing investigation to cover concerns about Scotland’s high rise flats as the row over the Grenfell Tower massacre mounts.

The committee investigation was launched in a letter welcoming an investigation into tower block accomodation by the Scottish Government.

Committee convenor Bob Doris MSP said: “There are thousands of families and individuals living in high rise accommodation across Scotland and they are understandably looking for reassurances at this deeply worrying time.

“Whilst both the Scottish Government and our social housing providers have moved quickly to take action and to allay fears, it is important that our Committee provides an additional layer of scrutiny both in terms of fire safety and building standards. That is precisely what we intend to do.

“All parts of the UK must learn from the disaster at Grenfell Tower and we must do all we can to ensure no-one has to experience the loss of a loved one in such tragic circumstances.”

Scottish local authorities reviewed housing safety proceedures in the wake of the Grenfell fire in Kensington in London. At least 79 are presumed dead in the scorched building, which burned almost top to bottom in the early hours of 14 June.

“The decision to close fire stations and to cut 10,000 fire fighters and then to freeze their pay for over a decade contributed to those deaths inevitably, and they were political decisions.” John McDonnell

Residents had complained for years of a lack of fire safety measures, and investigations are ongoing into the cladding for the building, which is thought to have spread the fire rapidly over the 24 storey structure.

Shadow chancellor John McDonnell told a rally at the Glastonbury music festival on Sunday (25 June) that a generation of political leaders were responsible for the deaths at Grenfell, through policies encouraging the financialisation of the housing market and cuts to services including fire fighters.

He said: “Those families, those individuals – 79 so far and there will be more – were murdered by political decisions that were taken over recent decades.

“The decision not to build homes and to view housing as only for financial speculation rather than for meeting a basic human need made by politicians over decades murdered those families.

“The decision to close fire stations and to cut 10,000 fire fighters and then to freeze their pay for over a decade contributed to those deaths inevitably, and they were political decisions.”

The UK Government has offered assistance to councils across the UK investigating the safety of housing stock, but has declined to put a figure on the ammount of financial aid it is willing to offer.

The figures for the dead at Grenfell are expected to continue to rise.