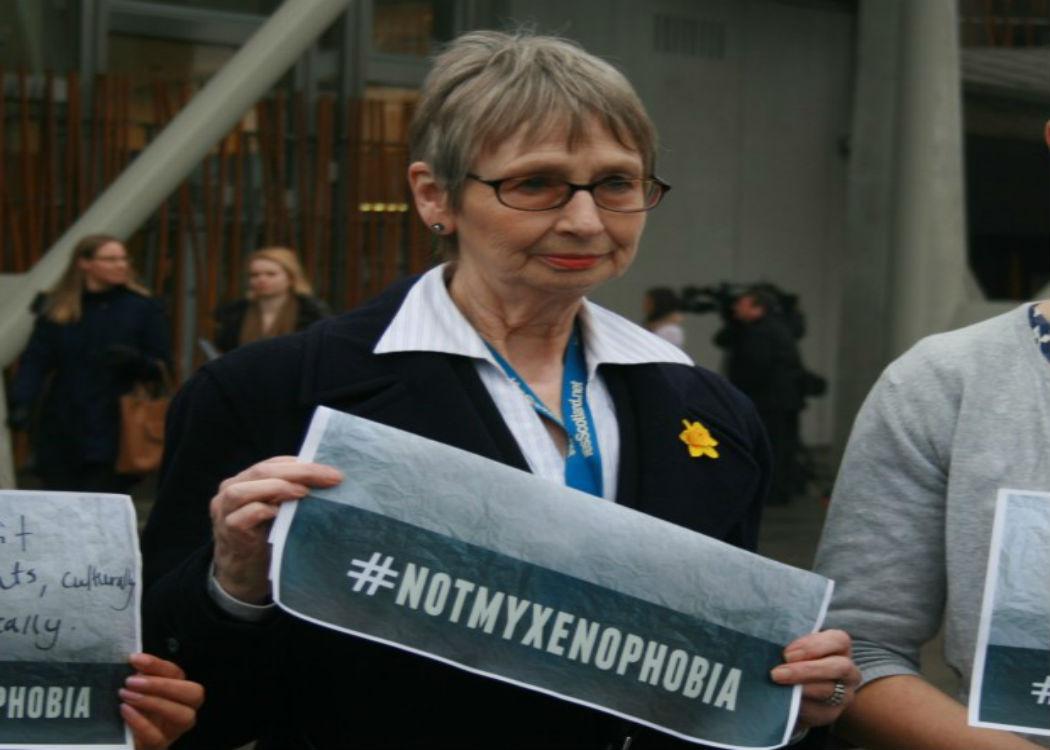 Urquhart motion: “That the parliament believes that Scotland’s diversity should be celebrated and rejects the negative attitudes expressed in the media and politics toward immigration and immigrants”

A CONSENSUS broke out in the Scottish Parliament on Wednesday in praise of the positive impact of immigration on Scotland and in condemnation of Ukip MEP David Coburn’s ‘Islamophobic’ attack on SNP Minister Humza Yousaf.

CommonSpace reported earlier this week (click here to read more) on the launch of a new campaign to challenge racist and xenophobic attitudes towards immigrants in politics and the media, called Not My Xenophobia, led by Independent MSP Jean Urquhart.

Urquhart introduced the debate in parliament, saying media outlets and politicians should be taking a more “responsible” approach toward their comments and coverage of immigration to Scotland and the UK.

Urquhart added that a “cultural enrichment” develops from embracing immigration, as people from diverse backgrounds can learn from one another. She reminded the parliament that Scots are a nation of immigrants, and that history should shape people’s attitudes toward migration.

An amendment to Urquhart’s motion from the Scottish Government, supported by all parties, condemned Coburn’s comments last week. The Ukip MEP said to referred to Humza Yousaf, the first Muslim minister in the Scottish Parliament, as Abu Hamza, a radical preacher convicted in the US for supporting terrorism.

Yousaf has since called for Ukip leader Nigel Farage to sack Coburn, and has sought support in the EU Parliament to punish the MEP.

Introducing the amendment for the Scottish Government, social justice secretary Alex Neil said Scotland, in the words of historian Tom Devine, is a ‘mongrel nation’ and that people from all backgrounds and all faiths should be welcomed.

Neil also pointed to economic reasons why immigration was important for Scotland, saying: “Scotland needs immigration because of our ageing population and to fill skills needs.”

Neil said Coburn’s comments towards Yousaf were “shameful and nothing short of disgraceful”, and said the MEP should now consider his position.

Labour MSP Ken Macintosh said he felt “as though we have gone backwards, certainly in terms of discussing immigration, over the past five to 10 years”. He said, for some in politics, immigration had become a “fear they can play to, rather than address”.

Independent MSP John Finnie concluded the debate, praising the consensual nature of it.

He added that the health and care sector in the Highlands would collapse without immigration to Scotland.

He said Scotland should be a “just and welcoming” country, adding that the world “would be a very boring place if we were all the same”.

Jean Urquhart’s motion read: “That the Parliament believes that Scotland’s diversity should be celebrated and rejects the negative attitudes expressed in the media and politics toward immigration and immigrants; also notes with concern the impact of these attitudes in the context of the approaching general election; believes that there should be recognition of the very real and positive contribution made by immigrants from all over the world to Scottish society, culture and history; also notes that the Scottish population is comprised of a rich mix of peoples and cultures from all over the world and believes that all immigrants and their descendants are an integral part of the Scottish identity; calls on politicians and the media to stop the demonisation of immigrants, and calls on media outlets to take a more responsible approach toward their reporting of immigration to Scotland and the UK.”