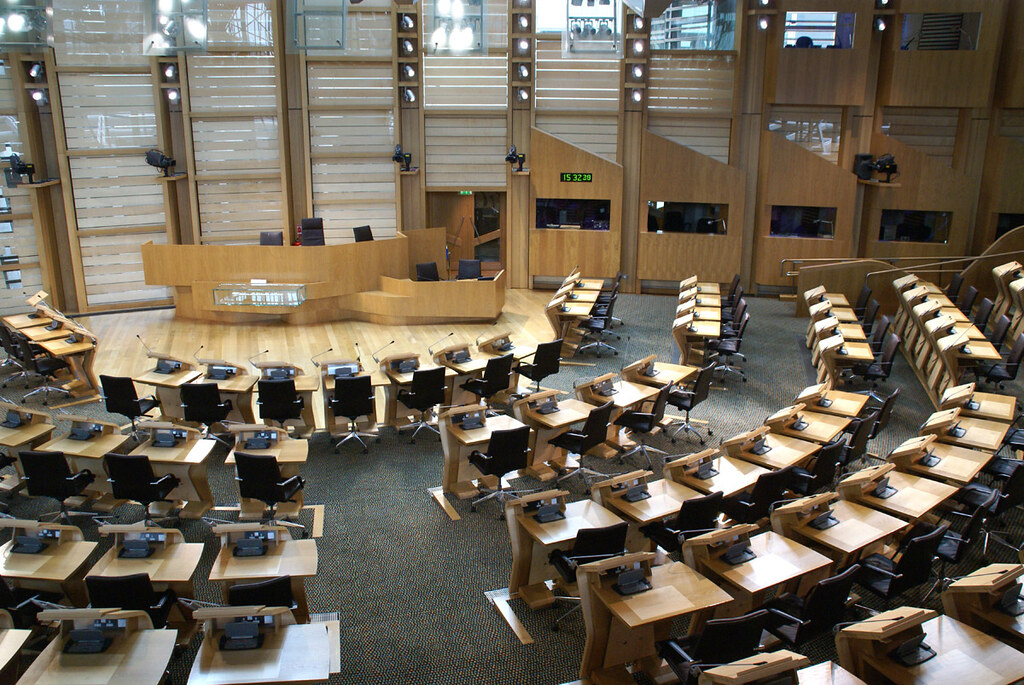 Holyrood voted 64 to 54 for right to hold referendum

THE Scottish Parliament has voted that the Scottish Government request the right to hold a referendum on independence in 2020.

The vote follows Prime Minister Boris Johnson’s rejection of calls for a transfer of powers to Scotland for the purposes of such a plebiscite.

Speaking on the debate resolution, First Minister Nicola Sturgeon told the chamber that she was “asking parliament to endorse a basic but fundamental principle.”

Read more: ‘It will not stand’ – Nicola Sturgeon responds to Boris Johnson’s denial of #indyref2 powers

Sturgeon said: “It is the sovereign right of the people of Scotland to determine the form of government most suited to our needs.”

She closely connected the demands for the right to a second referendum to the “reality” that “on Friday, because of the Brexit obsession of the Conservative party, Scotland will be removed from the EU against our will.”

Sturgeon further argued that Scotland would suffer serious consequences from “a Tory vision driven, on the part of some, by jingoism and xenophobia”, which would “narrow opportunities” for economic and social development, with independence “the only realistic way for Scotland to return to the heart of Europe”.

Opinion: The independence movement’s biggest battle is against denial

Sturgeon also stressed a widening democratic deficit, saying: “Brexit and everything that will flow from it is taking place against the will of people of Scotland.”

She added that the UK government had become “completely deaf to Scotland’s voice, needs or interests”.

Challenging the Scottish Labour party specifically, the first minister asked: “Do they support the principle in the Claim of Right that it is for the people of Scotland to choose our form of government?”

She also warned that Labour would be punished for “voting for the right of the Tories to foist a hard Brexit upon us”.

Analysis: 3 realities facing the indy movement after the Queen’s Speech

The motion for the debate titled ‘Scotland’s Future’, reads: “That the Parliament recognises the sovereign right of the people of Scotland to determine the form of government best suited to their needs; agrees with the cross-party Smith Commission report published after the 2014 referendum and backed by the UK Government that ‘nothing in this report prevents Scotland becoming an independent country in the future should the people of Scotland so choose’; recognises that there has been a material change in circumstances since 2014 and that a referendum should be held so that the people of Scotland can decide whether they wish it to become an independent country, and calls on the UK Government to reach an agreement with the Scottish Government on such a referendum taking place on a date and in a manner determined by the Scottish Parliament, which the Scottish Government proposes should take place in 2020.”

In response to the motion, opposition pro-Union parties claimed that Scotland’s public services were failing, and that the push for a vote in 2020 was only a display for the benefit of the wider pro-independence movement.

Scottish Conservative leader Jackson Carlaw MSP said: “The reason we are here today is that she needs to convince the Yes movement that something is happening.

He argued that Sturgeon was “so obsessed with mollifying them [the independence movement] that the interests of the Scottish people get pushed by the wayside”.

Carlaw added: “If only this government spent as much time of police and schools and polling and spin.

“The debate people outside this chamber wish to see is about how to push up educational standards and give children the best start in life.”

Carlaw drew laughter from pro-independence MSPs when he said: “Only in the chambers of the Scottish Government, alone in the four nations of the UK, do we see a determination to remain stuck in the past.”

Scottish Labour leader Richard Leonard said: “I completely understand that the thought of another five years of Boris Johnson government is driving some people to despair and others to anger.” However, he went on, “the people do not want another independence referendum any time soon”.

Leonard said that Scotland should “work through” Brexit, rather than introduce another independence referendum.

He said: “A referendum in 2020 makes no sense what so ever, and that is the proposition we are being asked to vote on today. The first minister herself said that another vote on independence should not take place until after Brexit is done, and it is not done.”

Leonard also advanced a view that the debate was a sop “to placate an over-agitated political base of activists”.

Analysis: Gathering storm – why 2020 is set to be a year of tension between Edinburgh and London

This contention was also pursued by Scottish Liberal Democrat lead Willie Rennie, who argued: “I did think, when I saw that we would have not one but two speeches on independence, whether this was a debate for me, or whether it would be for the different factions of the SNP.”

Scottish Green party co-leader Patrick Harvie attacked arguments from opposition benches contending that there was no mandate for another referendum.

Harvie said: “Those who defend the First Past the Post system, and say that a government with a 43 per cent majority has the right to do whatever the hell they like to the UK and Scotland, now say 45 per cent is not a mandate for the right to hold another independence referendum.”

Members also clashed over the timing of a prospective referendum.

Scottish Labour MSP Neil Findlay said he upheld the right to a referendum, but challenged the timing, given that the outcome of Brexit was not yet fully understood.

Findlay stated: “Had this motion been more realistic and rational, I might have voted for it.”

But, he continued, “it is unrealistic to have any referendum before we know exactly what that impact is” from Brexit.

SNP MSP Alex Neil rebutted Findlay’s argument, pointing out that the resolution did not provide a date for a second independence referendum, but simply affirmed the principle that it was the right of the Scottish people to hold another vote.

Neil said: “It doesn’t commit to a date. The resolution says that the date will be determined by parliament. If you agree with the claim of right then there is no excuse for voting against this.”

Russell said: “If this parliament votes for a referendum it will have it.”

The Scottish Parliament also voted to back a new referendum on Scottish independence in March 2017.

This Friday, the first minister is due to make a speech laying out the “next steps” for the campaign for Scottish independence, following the UK Government’s refusal in January to any transfer of powers to Scotland for such a referendum.