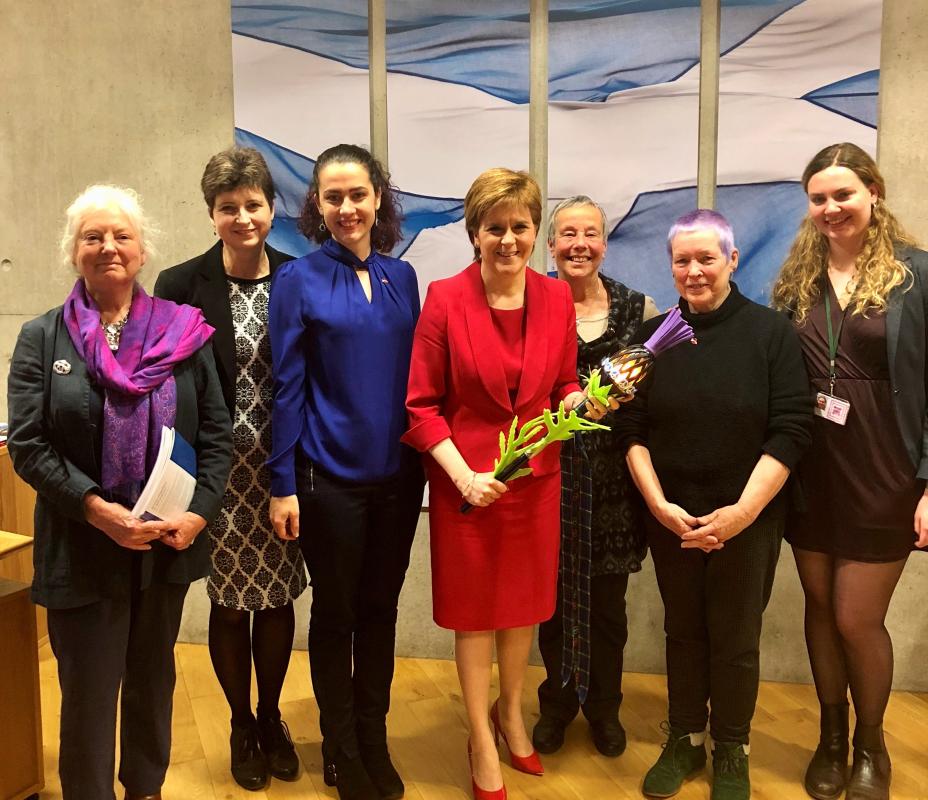 WITH THE NOBEL PRIZE award ceremony set to take place in Norway on Sunday 10 December, where the International Campaign to Abolish Nuclear Weapons (ICAN) will be awarded the Nobel Peace Prize, Scotland is showing its support with a series of events over the weekend, while a group of Scottish Campaign for Nuclear Disarmament (CND) activists will travel to the celebrations in Oslo.

First Minister Nicola Sturgeon presented the group with a torch for the torchlight procession which will take place on Sunday, as a symbol of the Scottish Government’s support for the nuclear weapons ban.

ICAN has been awarded for its work towards the Treaty for the Prohibition of Nuclear Weapons (TPNW), which was adopted by the UN earlier this year. The treaty, which is not supported by the UK Government, has been endorsed in the form of a parliamentary pledge by all SNP and Green MSPs and three Labour MSPs, including party leader Richard Leonard, and all SNP MPs at Westminster.

Janet Fenton, vice-chair of Scottish CND, who will travel with the torch to Oslo this weekend, said: “Since ICAN started ten years ago I have worked with hundreds of Scottish people across different groups who have been inspired to get involved with the idea of banning nuclear weapons, not just from Scotland but everywhere.

“The joy attached to taking this torch to Oslo is knowing that Scotland is playing a significant part in changing the status of nuclear weapons in the world. The Cross Party Group at Holyrood and the majority of Scottish elected representatives that have joined with international parliamentarians clearly identifies a huge question mark over the UK’s mandate for modernising Trident.

“Of course there is still need to continue working here in Scotland with – and as – parliamentarians and diplomats, and also to use direct action, the arts, legal and media challenges to ensure Scotland articulates that nuclear weapons as inhumane, indiscriminate and illegal, but the Nobel Award in Oslo is a chance to share and celebrate.

“As well as taking part in the torchlight procession, I’ll be at ICAN’s International Campaigners meeting, planning our next steps.”

Fenton will be joined by Flavia Tudoreanu and Veronika Tudhope, co-organisers at Scottish CND, and Jill Saunderson, a peace campaigner from Fife.

For those who aren’t able to make it to Norway, peace campaigners in Scotland are organising a range of events over the weekend to celebrate, as a sign of the support in Scotland for the treaty.

On Saturday, Cromarty Peace Group will hold a celebratory stall at the community market, YES Skye and Lochalsh will host a gathering, Edinburgh CND will host a celebration on Princes Street, and Edinburgh Yes Hub will be holding a party from seven till late.

On Sunday there will be gatherings in Dunblane and Biggar, on Monday the Women’s International Leaque for Peace and Freedom Party will host an event in Edinburgh, and on 16 December, Edinburgh SNP will have a special celebration for ICAN as part of its festive gathering.

David Mackenzie of Scrap Trident, highlighting the weekend of events and their significance, said: “A global catastrophe becomes more and more likely the longer nuclear weapons are there. Right now, with seriously unstable leadership in charge of huge arsenals, the risks are as high as at any time since the Cuban missile crisis.

“The only real option is get rid of nukes forever. It is that door of hope that the Treaty opens up for us. That is what the celebrations around the Peace Prize are all about, the hope for the ultimate prize – real human security across the globe.

“In Scotland we need to get used to the fact that we are in a unique position as the only significant part of any nuclear-armed state that clearly opposes that state’s deployment of weapons of mass destruction. As we party this weekend we know we must live up to that.”

Find more details of the weekend’s events via Scrap Trident.