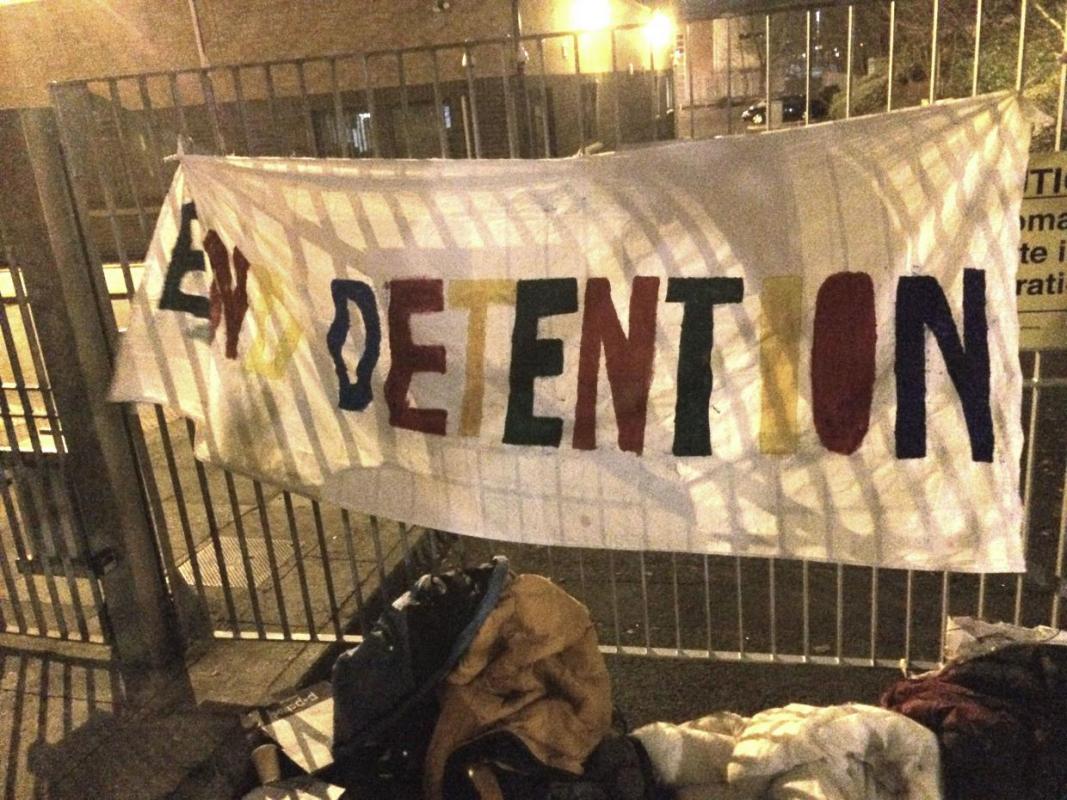 THE ROLE of Police Scotland in dawn raids against asylum seekers has been criticised following evidence that officers attended a raid in Bridgeton on 21 March.

A raid on 21 March of a 45-year-old LGBT asylum seeker and her young son was carried out by UK Immigration and Border agency staff but they were assisted by two officers from Police Scotland.

Though the Scottish Government has been opposed to the practice of dawn raids for several years, the country’s police force is still participating in them, Commonspace can reveal.

Beverly Vaanda Kanjii, who claimed asylum in 2013 on the basis that she suffered persecution due to her sexuality in Namibia, also alleges that she was assaulted by immigration officers during the raid. Her son, aged 14, has been going to the local school, St. Mungo’s, for three years.

The raid occured around 7am in Bridgeton in the city’s East End. An eyewitness to the raid, who wishes to remain anonymous, told CommonSpace: “I rang Beverly’s door around 8am. The police opened the door; Beverly was shouting “They’re kicking us!”. So I put my foot in the door and they banged it shut … They brought her downstairs and wouldn’t let me near.

“She was restrained – handcuffed. The police pushed me away and threatened to arrest me if I didn’t leave. I couldn’t see Beverly when they took her out but she phoned me just after. She said ‘I’m in so much pain, they beat me and dragged me across the floor’.”

A spokesperson for Police Scotland said: “It is routine for police officers to attend in such cases.”

When CommonSpace spoke to Beverly Vaanda Kanjii herself on 21 March, she was in a bus at the Home Office centre in Glasgow, and also confirmed that two police officers had been with the immigration enforcement officers who came to her Bridgeton flat at 7am that morning.

Control over immigration and asylum is reserved to the UK Government, so MSPs do not have a say over the use of dawn raids in Scotland. However, policing is fully devolved to the Scottish Government.

Dr Nick McKerrell, lecturer in law at Glasgow Caledonian University, said: “The use of limited police resources at a time of austerity to assist cruel UK immigration policies of dawn raids highlights the lack of genuine accountability of Police Scotland.

“The Scottish Government should set up an inquiry into how Scottish police officers can be used in such a way. They did this recently over the abuse of stop and search powers. In the longer term there needs to be a structural reform ensuring local accountability of policing.”

“None of this should be happening – we’ve got lots of space in Scotland we need people to move here.” John Mason MSP

A spokesperson for Police Scotland said: “It is routine for police officers to attend in such cases.”

Asked for comment, a Scottish Government spokesperson said: “The removal of asylum seekers is a matter for the Home Office, who may ask for Police Scotland’s assistance to ensure the safety of asylum seekers, Home Office personnel and the general public. The operational response in cases where such assistance is requested is a matter for Police Scotland.”

A Scottish Government press officer also told CommonSpace: “There’s nothing we can do about police taking action on a reserved immigration matter. Police Scotland are accountable to the SPA (Scottish Police Authority), not to the Scottish Parliament. We’re not here to give you a history lesson in how devolution works.”

However, Police Scotland discretion on reserved matters is disputed. Reserved drugs laws – on possession of cannabis – are no longer strictly enforced in Scotland.

Refugee rights campaigner and Rise candidate Pinar Aksu, who herself was detained by the Home Office as a child, said: “People are being detained and deported for seeking safety in the UK. We need people to know the truth about the inhumane asylum system. Everyone is welcome here. No one leaves their country unless it was their last option.”

The Home Office refused to comment on Kanjii’s case or give information on her whereabouts, although CommonSpace understands that at the time of publication, she and her son are in a detention centre near London, awaiting deportation to Namibia.

A Home Office statement read: “The UK has a proud history of granting asylum to those who genuinely need it, and every case is carefully considered on its individual merits. We expect those found to have no right to be in the UK to leave, and provide help and support in returning to their own country. If people choose not to leave we will enforce removal.”

“The removal of asylum seekers is a matter for the Home Office.” Scottish Government spokesperson

A spokesperson from the department at Brand Street added: “Times of visits to private addresses are decided on a case-by-case basis. While visits are not routinely carried out late and night or early in the morning there may be occasions when there is an operational need for this. This government met its requirements on routine detention of children for immigration purposes by fundamentally changing the system to ensure the welfare of the child is at the heart of every decision we make.”

Shettleston SNP MSP John Mason said the previous agreement between the UK and Scottish governments to end child detention should be adhered to, adding that arresting families is “not necessary – people with children don’t vanish, they want their kids at school. They’re not hard to locate. If someone has to be deported it should be done properly.

“None of this should be happening – we’ve got lots of space in Scotland we need people to move here. But even when we’ve asked for minor tweaking of the immigration rules – post-work visas, a tiny tweak – the UK Government won’t budge, and it’s clearly for their own political ends.”

Regarding the role of Police Scotland in dawn raids, Mason said: “I don’t know why the police are there. The Home Office refuse to deal with MSPs, they only talk to MPs [about case work].”

“We need people to know the truth about the inhumane asylum system.” Pinar Aksu

But SNP MP Alison Thewliss, whose constituency covers Kanjii’s home in the East End, told CommonSpace the Home Office was not properly communicating to MPs either. “The hotline for MPs at Brand Street just rang out yesterday. We’re concerned about that and we’ll be taking it up with the minister”, Thewliss’ office said.

Following the raid early on 21 March, refugee rights campaigners and friends of Kanjii blockaded the entrance to the Home Office depot in Ibrox, in a stand-off which resulted in at least 30 officers being deployed along with police dogs, pulling apart protestors who were glued together and allegedly pushing a heavily pregnant woman repeatedly in the back.

The deportation of father-of-two Lord Apetsi, recently elected as executive officer to the National Union of Students, was met with a protest in Edinburgh yesterday [21 March], and the campaign to keep Apetsi in Scotland has received support from First Minister Nicola Sturgeon, among others.