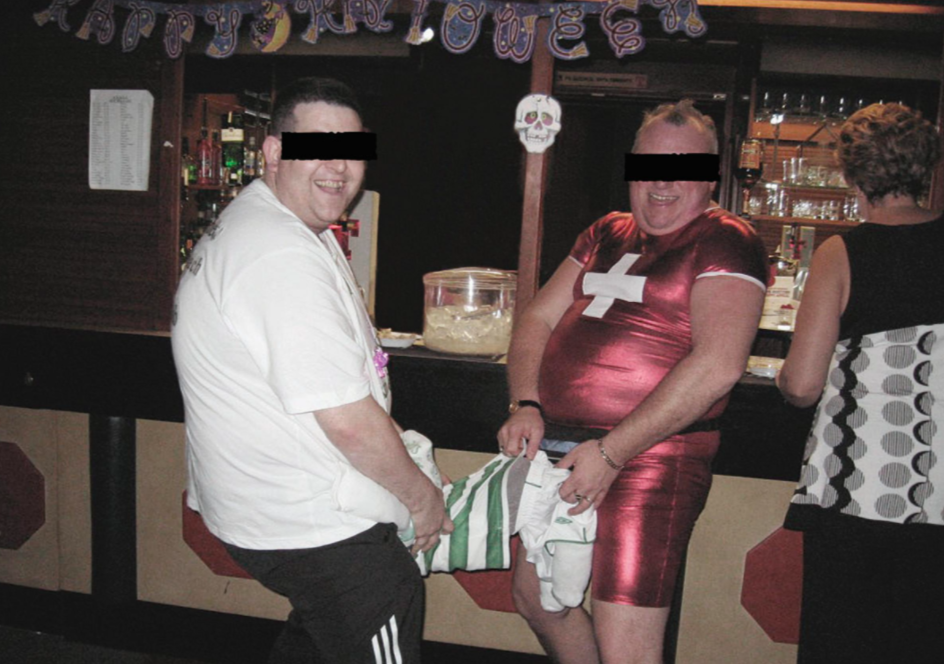 CHILDREN dressed as Jewish prisoners of war behind an adult dressed as Hitler, two grown men simulating child sex abuse on a toy sporting a Celtic football strip and another man depicting the hanging of the pope, all in the name of friendly competition.

Images released of a Halloween party held in the Airdrie and District Orange hall and Social club from 2010 and 2013 have shocked anyone unfortunate enough to have set eyes upon them from; the Catholic church, anti-sectarian groups to war veterans who have all slammed the sick shots.

But the main political parties in Scotland have been deftly silent in their condemnation of the recent revelations and actions of individuals attending both the Orange hall Halloween parties and, more recently, the singing of the famine song at the orange walk in Glasgow.

Common Space contacted every major party in Scotland to ask their view on both matters. Thus far, only Scottish Labour and the Liberal Democrat MP Christine Jardine have responded to our request for comment on these serious issues.

Whilst Christine Jardine MP said: “This behaviour is absolutely sickening. There should be a zero-tolerance approach to sectarianism.

“I’m sure Police Scotland will be looking closely at these incidents to determine whether any offence has been committed and what action should be taken.

“Tackling sectarianism is everyone’s responsibility but it is essential that the Scottish Government, local authorities and the police play a leading role in educating people on the corrosive impact that it has on communities.”

The silence from the SNP, the Green Party and the Tories has been deafening and empty, they’ve been completely void of expression.

Easy to laugh at the sheer absurdity of all of this but the sanctioned and approved anti-Irish racism on display here needs highlighted. pic.twitter.com/5gmmTHmqim

Despite attempting to engage with the elected members of the Scottish parliament, Common Space has hit a wall of silence on issues that continue to blight society and affect constituents who voted the same members to their respected positions.

Parties have mentioned that Police Scotland are investigating matters and said they wouldn’t want to discuss an ongoing investigation, but Common Space discovered that no arrests have yet been made regarding the incidents which would allow MSPs to comment – should they wish to do so.

Moreover, the fact that Scottish Labour responded through their press office and Edinburgh West MP Jardine wholeheartedly condemning sectarianism leads to the question: why are the other parties refusing to comment?

We strive for answers.

Interestingly, the Grand Orange Lodge of Scotland themselves condemned the pictures taken. Executive officer Robert McLean said: “We’ve been quite clear right from the word go on the Sunday Herald article and the famine song. I’ve been quite clear that we will sit down with the police and assist them with their enquiries.

“On Monday, The Daily Mail came on to me and also The Jewish Chronicles and I condemned the pictures quite clearly with those two newspapers.

“I condemned the pictures as being totally distasteful and we’re quite happy to assist the police with their enquiries.”

Nil by Mouth Campaign Director said: “The events and media revelations of the recent weeks remind us that for some elements in society an ‘expression of culture’ amounts to little more than directing bile and hatred towards others. From chanting the famine song to insulting World War 2 veterans and holocaust survivors by mimicking Hitler and Jewish children to Orange Halls being attacked we’ve seen some pretty appalling and bigoted behaviour. We need to see real leadership at a political and community level to tackle this as ignoring the problem won’t make it go away.”

A Police Scotland spokesperson said: “There have been no arrests but enquiries are ongoing.”