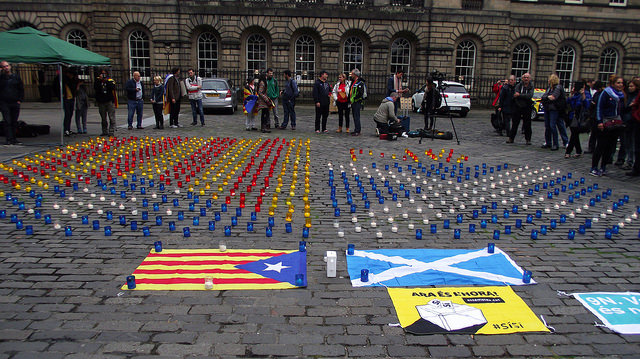 FOLLOWING a 90 per cent vote for independence in Catalonia on Sunday (1 October), which the Spanish Government refuses to recognise, Scottish pro-independence groups have spoken out in support of Catalans.

Polling day saw citizens of Catalonia face police violence and voter suppression, employed by the Spanish Government to block the referendum which it had deemed unconstitutional.

Many pro-independence supporters in Scotland have shown support for Catalonia in the months and years leading up to the vote, with several delegations heading over to Catalonia in time for the referendum.

Scottish independence groups have responded the news of the referendum result and the scenes in Catalonia on Sunday.

“As the world watched in disbelief at the sight of elderly women, young people and many more being beaten by Spanish police for doing something we so take for granted here was awful to see.

“The Catalonian people showed great courage and restraint in the face of violence and repression and have earned their right to choose their own future. There is much Scotland can learn from Catalonia and much that Spain can learn of our own referendum process which was internationally viewed as a success for democracy. Self-determination is a right enshrined in international law and it would be wrong for Catalonia to be excluded from that right.”

“The vicious crackdown upon Catalunya’s democratic right to national self-determination shames Spain and shames the European Union, whose heads in Brussels claim to be the pinnacle of democracy but say nothing when one of its member-states brutally represses its own people.

“Perhaps most shameful of all was the UK Foreign Office statement, which once again gave the UK the appearance of a country that is interested in democracy and citizens rights only when it suits their interests, i.e. as hypocrites, at best.

“The Scottish Government should make immediate appeals to the UK Government and the European Commission to pursue international action against the Spanish Government for its flagrant abuse of human rights, and to offer the Catalan Government whatever support it needs to ensure it can continue to function and carry out its duties in the face of the Spanish Government’s clear attempt to liquidate its democratic authority in Catalunya.”

“The visceral brutality meted out by the Spanish state against ordinary, peaceful citizens daring to take part in a democratic process has sent shockwaves across Europe. That millions of Catalans voted is a testament to the courage, resilience and organisation of the social movements and local referendum defence committees.

“International observers played an important role, and our demonstration of solidarity at the Spanish Consulate was also a matter of duty in such circumstances. Now the question is posed: which side are you on?

“The actions of the Spanish state cannot be legitimised. We support and stand ready to demonstrate in the streets our support for the planned general strike. Our approach is to build solidarity from below.

“All democrats and European institutions must fall on the right side of history – with the Catalans.”

Julie Bell, SNP Councillor and WFI national committee member, is in Girona, Catalonia as part of a seven person delegation. Bell said the response to the delegation had been overwhelmingly positive, and that she saw clear parallels between the Catalans’ movement for independence and our own here in Scotland.

Describing the vote for independence as the “logical thing to do”, Bell said: “Why wouldn’t you want to run your own country? We understand that, and the people [in Catalonia] really appreciate that we understand it.

READ MORE: Full interview with Julie Bell of WFI on their Catalan visit

“What I’ve been incredibly touched by is that the people are so moved that so many Scots have turned out to support them.”

EU Citizens for an Independent Scotland

“We are deeply saddened by the police violence in Catalonia yesterday, especially compared to the precedent set in 2014 in the previous vote in Catalonia. People can argue as to the legality of organising and holding a vote, but the actions of the Spanish state, effectively criminalising millions of citizens, and attempting to suppress democracy with physical force and violence should not be acceptable in the 21st century.

“We commend the Catalan peoples’ resolve to maintain their peaceful, civic action. They have set an example to the world. Founding members of our group are of Spanish (not Catalan) descent, whose families fled Franco’s regime and in yesterday’s action we see his ghost still holds great power in Spain.”

The group also wrote a blog post calling on the European Commission to speak out against the violence.

“Christians for Independence (CFI) are horrified at, and totally condemn, the violence and brutality of the Spanish government police against the Catalan people who only wished to peacefully vote in their independence referendum.

”It is to the credit of the people of Catalunya that they remained peaceful despite the Spanish violence and that will strengthen their hand in the days and weeks to come.

“There is no place for this in a democratic society and the EU must condemn this oppressive behaviour by the Spanish State and support the right of the people of Catalunya to self-determination, if that is their wish.”

Peter Swain of Pensioners for Independence

“I’m quite sure that I speak for Pensioners for Independence as a whole when I say we’re very supportive of the Catalans in their struggle for independence, and dismayed by the heavy-handed attempts by the Spanish Government to disrupt the referendum.

“Haddington SNP held their usual street stall at the Farmers’ Market in Haddington last Saturday morning and turned it into a demonstration of support for Catalonia, with Catalan flags flying all morning. A group of Yes Bikers also turned up – arriving from far and wide – to give their support.”