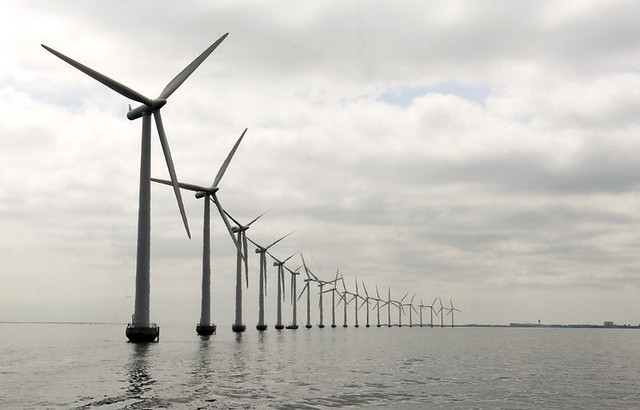 Unite and GMB letter: “Why did the Scottish Government not nail down commitments from the developers to bring work to Scotland?”

TWO of Scotland’s biggest trade unions have written to Finance Secretary Derek Mackay demanding answers on what they call the “Scottish renewable jobs rip-off”, as hopes fade of supply chain jobs coming to the local community from a major windfarm project off the coast of Fife.

The letter, from GMB and Unite’s Scottish chiefs, comes ahead of a planned protest on Friday [5 July] outside the Edinburgh offices of EDF Renewables, the French company which has won the contract to develop the offshore renewables site at Neart naGoaithe (NnG).

Unions argue that promises made by the company to bring jobs from the NnG project to Fife yards have been broken. They argue that a contract for Bifab, the manufacturing firm based in Fife which was mothballed last year but saved partly through Scottish Government investment, could support over 1,000 jobs and thus keep the Fife yards alive.

The STUC understands that the vast majority of the contract is set to go to Indonesia instead. The impact in carbon emissions from the shipping alone is expected to be the equivalent of 35,000 new cars on the road, according to STUC research.

The letter, signed by Pat Rafferty of Unite Scotland and Gary Smith of GMB Scotland, thanks Mackay for his “continuing efforts to bring some work from NnG to the Bifab yards in Fife”, but questions why the Scottish Government has supported the project “consistently” without any guarantees over jobs while providing “guaranteed subsidies” through the Contract for Difference (CfD) system which, the union believes, have turned out to be “lucrative terms” for the company.

The letter recalls the history of repeated delays in the project after the subsidy for it was agreed in 2015, and adds: “This has been a politically controversial project from the start – but also one which the Scottish Government have supported consistently.

“Two things arise from this. Firstly, the years of delay mean that the developers will now benefit from the much more generous CfD support which was previously available. Put simply, the industry’s costs have reduced but the owners from this windfarm will stand to benefit from the most lucrative terms that were supposed to help the pioneers in the sector.

“Our own research suggests that the fact NnG was granted CfD under the first rather than the second round will make it exceptionally profitable compared to projects which subsequently won CfD at more competitive levels of subsidy. By comparison with the Moray East CfD rate, for example, the resultant differential over 15 years could be around £1.9 billion, or £130 million per annum.

Time is running out to secure work from NnG @EDF_Renewables @edfenergy contract to BiFab yards. Action required urgently to ensure we get a strategic foothold in industry.#fifereadyforrenewal pic.twitter.com/IFN1POyNDO

A Scottish Government spokesperson responded to the open letter by stating: “All parties are currently working collaboratively in respect of the ongoing commercial discussions on the NnG project.

“As a result, it would not be appropriate to comment on the specifics of this project at this time.”

The protest on Friday [5 July] at EDF Renewables’ Edinburgh office on 144 Morrison St, Edinburgh, at 2pm, is organised by the Fife – Ready for Renewal campaign, which held a community meeting of 130 people last month. EDF were invited to the meeting to address community concerns, but did not turn up.

Grahame Smith, STUC General Secretary, stated ahead of the protest: “By ignoring invitations, and refusing to turn up to the community meeting in Fife, the community has been left with no choice but to go to EDF’s door for answers.

“We hope that EDF does the right thing and awards the contracts to the Fife yards.”

Asked about the Fife Ready for Renewal campaign in May at First Minister’s Questions, Nicola Sturgeon said she “full supports” the aims of the campaign.

A spokesperson for EDF Renewables stated: “We respect people’s right to a peaceful protest and we understand that the NnG project is seen as critical to securing more work for the yard. We are working hard to make that a reality.

“The issue is far bigger than our project alone and we hope a range of bodies including us, industry groups, the trade unions and the Scottish and UK Governments can come together to develop a long term plan for BiFab to ensure success.”