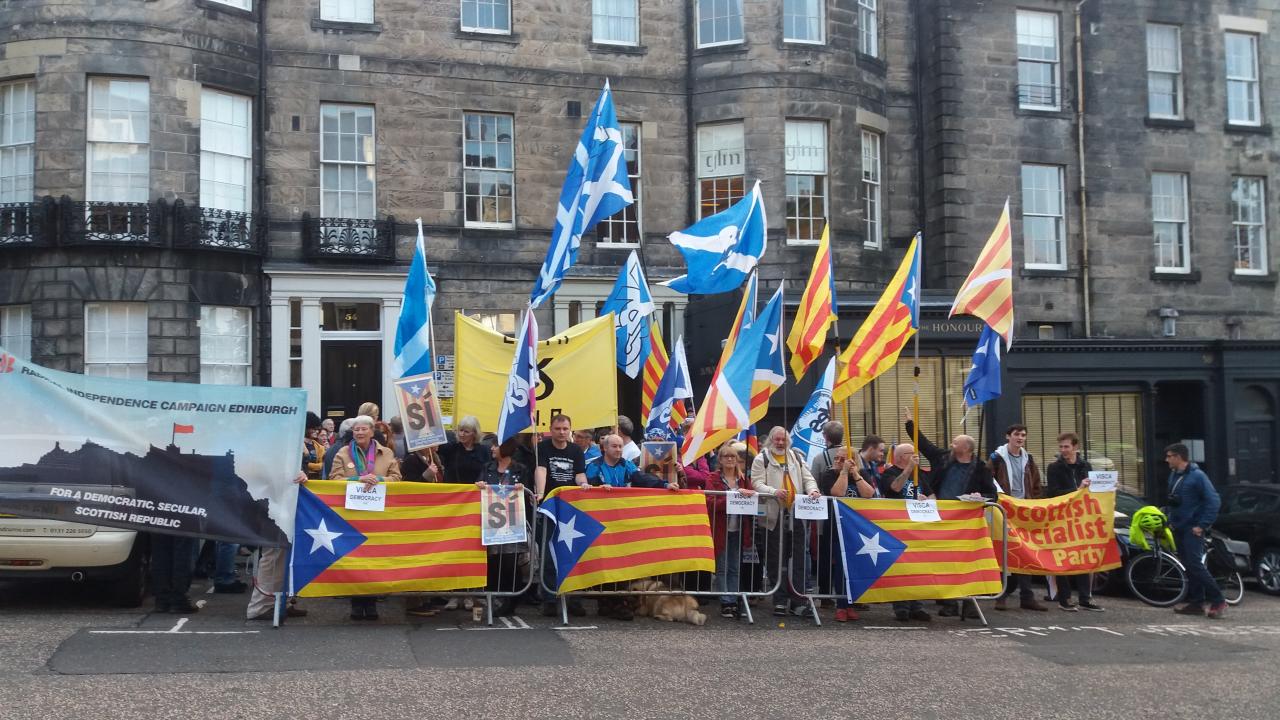 Amid solidarity demonstrations, cross-party MSPs express support for the democratic will of Catalonia

POLITICIANS AND ACTIVISTS from across Scotland’s political and constitutional spectrum have expressed their support for Catalonia’s embattled independence referendum in the face of attempted repression by the Spanish Government.

Emergency demonstrations in support of the Catalan referendum have been held in Edinburgh, where protestors assembled outside the Spanish consulate, and Glasgow, while Dundee’s new festival of political radicalism Leftfest hosted its own expression of solidarity with Catalonia.

Connor Beaton, one of Leftfest’s organisers and national secretary of the Scottish Socialist Party, commented that Catalonia’s repression at the hands of the Spanish state evoked “uncomfortable memories of Franco’s dictatorship”.

Following last week’s open letter to European Commission President Jean-Claude Juncker from a group of SNP MSPs urging European intervention to ensure a “free, fair and non-intrusive” referendum, a cross-party group of MSPs from the SNP, the Scottish Greens, Scottish Labour and the Scottish Liberal Democrats have written to Spanish Prime Minister Mariano Rajoy “to express our grave concern at the escalating actions of the Spanish state in Catalonia.”

No Scottish Conservative politicians signed the letter. Neither did the two contenders for the Scottish Labour leadership, Anas Sarwar and Richard Leonard, who have remained silent on the issue.

The letter continues: “We come from a range of political traditions, with differing views on Scotland’s constitutional future and a collective neutrality on the question being posed to the Catalan people but we are united in our belief in democracy.

“Work together to allow the people to decide their own future.” Open letter from MSPs to Spanish Prime Minister Mariano Rajoy

“The Spanish Government claim to be acting in defence of democracy but threats of legal action against hundreds of democratically elected representatives and repressive acts against an elected government, media organisations and citizens are in no way democratic acts.

“The recent arrest of a Catalan government minister and a number of government staff was a particular violation of the norms of European democracy.

“The situation in Catalonia is a political challenge and it can only be adequately resolved through political action, through dialogue and through allowing the people to express their will democratically.

“Legal action against the Catalan government, several hundred local mayors and others perceived to be facilitating the referendum is no way for a democratic European state to act against its own people.

“We call on you and your government to engage with the Catalan government as partners in facilitating a democratic and just resolution to this situation. Work together to allow the people to decide their own future. This is the only sustainable and truly democratic solution.”

“Deploying an increasingly militarised police against a democratic movement of citizens is a dark road to go down.” Ross Greer MSP

Commenting on the escalating situation in Catalonia, Ross Greer MSP, the Scottish Greens’ external affairs spokesperson, said: “As MSPs we represent a spectrum of opinions on Scotland’s own constitutional debate and it’s certainly not for us to tell the Catalan people what choices they should make.

“As democrats and parliamentarians however, we must defend the right of peoples across the world to decide their own future and the right of elected representatives to carry out their duties to the people without feat of arrest.

“To see a state at the heart of Europe take such oppressive actions against its own people is simply unacceptable. The UK and Spain may be different places with different constitutional traditions but in Scotland we have proven that such significant questions can be answered through peaceful debate and dialogue.

“The Spanish Government must try to find a political solution to this situation. The alternative, of arresting government staff & senior officials, raiding the offices of newspapers and political parties and deploying an increasingly militarised police against a democratic movement of citizens, is a dark road to go down.”

The Spanish Government has pledged to do everything necessary to prevent the referendum, which has been deemed illegal by Spain’s Constitutional Court.

According to Spanish newspaper El Nacional, Spain’s Guardia Civil have entered 31 Catalan council offices to seize literature relating to the referendum, as well as documents and emails signed by Catalan mayors allowing the buildings to be used as polling stations.

As the Guardia Civil raided the Catalan Department of Economy building, an estimated 40,000 people rallied outside in protest against the actions of the Spanish authorities.

On 1 October, the planned date of the independence referendum, a national solidarity demonstration organised by the Radical Independence Campaign will take place in Edinburgh outside the Spanish consulate on North Castle Street at 1pm.