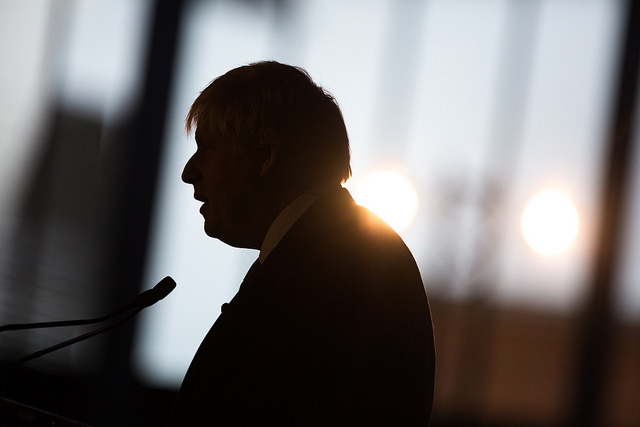 A LEADING Scottish Muslim community association has expressed frustration that the Scottish Conservative Party have failed to reach out to them as the Tory Islamophobia scandal rages on.

Ruth Davidson’s party had faced calls for an “urgent audit” to deal with the “deep problem” of party Islamophobia in May, after it emerged North Lanarkshire party councillor Stephen Goldsack was a former BNP activist.

However, as fears were again spiked by an Islamophobic outburst from recently resigned foreign secretary Boris Johnson – who wrote in the Daily Telegraph that Muslim women in burkas “look like letter boxes” and “bank robbers” – the Muslim Council of Scotland reported the Scottish Tories had made no attempt to contact them and “allay fears about Islamophobia”.

READ MORE: Opinion: The British state is using gendered racism as a weapon against Muslim women

Speaking to CommonSpace after Johnson’s statements, an MCS spokesperson said: “Since the sacking of Stephen Goldsack, MCS haven’t had any contact from the Scottish Conservatives to allay fears about Islamophobia in the Scottish party.”

Referring to Johnson’s article, the spokesperson said: “He’s gone on to attack a religious symbol by mocking the burka and objectifying Muslim women, degrading them, and casting suspicion on them at a time when Muslim women are one of the largest groups of victims of religious hate crime.

“The comments from a big beast of Conservatism go to show how ingrained anti-Muslim hatred is, and how normalised anti-Muslim sentiments are in the Tory party. It further raises the question as to why there is no acknowledgement of Islamophobia in the party, given evidence of a serious problem.”

Johnson’s latest comments add to a long list of statements made by the former Mayor of London which many consider to be racist, and were defended by fellow Tory MP Nadine Dorres, as well as being met with approval by many Tory supporters and activists.

His abrupt tone comes after Johnson put himself outside of the UK cabinet and made contact with US far right strategist Steve Bannon, with whom he is reported to be in regular communication.

Johnson has long harboured leadership ambitions and has sought in recent years to outflank both former Prime Minister David Cameron and current leader Theresa May from the hard right.

The MCS’s concerns mirror exasperation by Muslim and anti-racist campaigners around the country. Writing in the Guardian, former UK Tory chair Sayeeda Warsi said the party’s response to Islamophobia accusations could be summarised as “fuck the Muslims”. Both Warsi and the Muslim Council of Britain have repeatedly called for an independent investigation into party Islamophobia.

Such demands were also made of the Scottish party in May, with Scottish Government transport minister Humza Yousaf calling for an “urgent audit” after accusations of “deep” anti-Muslim bigotry in the party, a problem which MCS claims hasn’t been dealt with.

Responding to the accusations, a Scottish Conservative spokesperson told CommonSpace: “Boris Johnson’s comments were wrong and ill-judged and of course he should apologise.

“All parties in Scotland have had issues with racism in the past and should work together to tackle it. As a party, we are always open to meeting and discussing issues with organisations like the Muslim Council of Scotland.”

Johnson’s statements, which have been widely condemned by anti-racist organisations, are only the latest to be accused of expressing racist and bigoted sentiments in the UK and Scottish Tory parties.

Zac Goldsmith’s Tory campaign for London Mayor in 2016 featured a leafleting campaign which played on tensions between Indian and Pakistani Muslim communities. The Tory party in Scotland has been repeatedly shaken by racist and bigoted statements made by some councillors, and Davidson’s refusal to deal with cases by expulsion.

In July, Scottish Tory youth leader James Bundy was criticised for accusing the BBC of “cultural Marxism” – a phrase associated with the Nazi regime in Germany and still in use by neo-Nazis to allege a Jewish conspiracy in the media and other institutions.

“The comments were not an accidental gaffe, they were a calculated and callous insult against Muslim women.

“The Prime Minister’s refusal to condemn Boris Johnson is shameful and follows her lack of action towards Tory MP Michael Fabricant – who tweeted a blatantly Islamophobic picture of Sadiq Khan.

“It’s about time the Tory party heeded the calls from Sayeeda Warsi – the former co-chair of the Conservative party – and challenged the open Islamophobia being trumpeted within their ranks.”