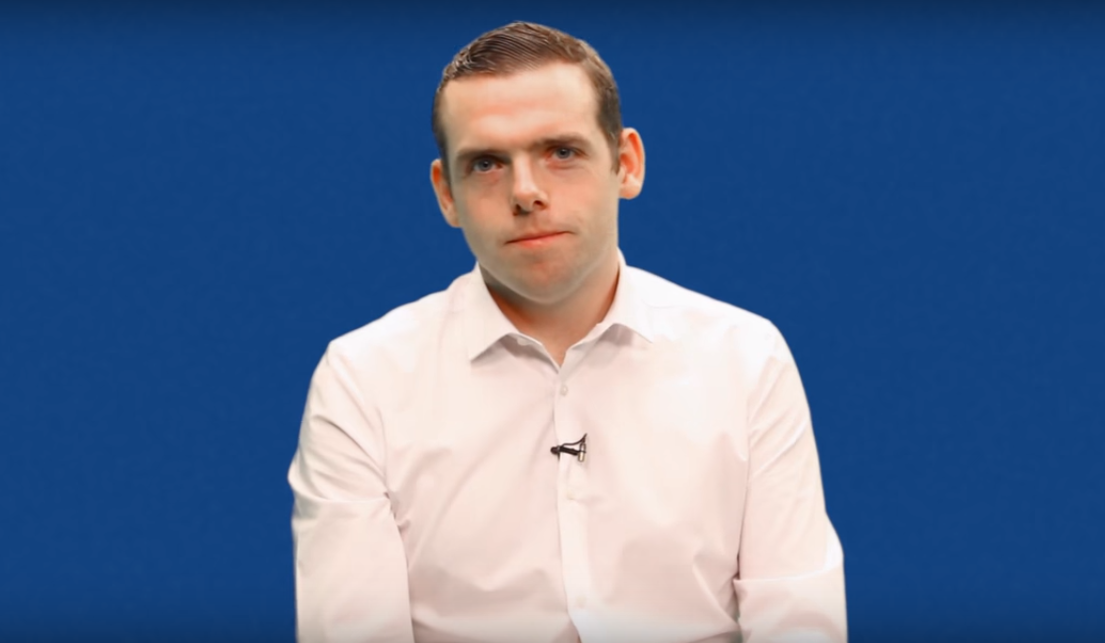 CAMPAIGN groups and opposition parties have united to condemn comments made yesterday by Tory MP Douglas Ross, who said his first priority if he was prime minister would be “tougher enforcement against Gypsies and Travellers”.

The comments were made as part of a short video interview with Core Politics in which Douglas Ross, MP for Moray, was asked what we would do if he were prime minister for one day.

Asked to explain these comments later, Ross told Open Democracy: “It was a quick-fire question and answer session and my answer was based on what I was dealing with at the time.”

“Illegal and unauthorised Gypsy/Traveller encampments are a significant problem in Moray with the settled community continually complaining that Gypsy/Travellers receive preferential treatment whether it is with regard to planning decisions or just the way they take over a piece of land or lay by and then often leave it in a significant mess which has to be cleaned up at a cost to the local tax payer.”

The remarks have been roundly condemned by charities and representatives of the Scottish Green Party, SNP, and Scottish Labour.

“Such narrative serves only to create further divisions in society. Rather than ‘scapegoating’ Scotland’s oldest ethnic minority community, I would urge Mr Ross to use his position, as an elected representative, to help shape policy that reflects and includes Gypsy/Traveller culture and tradition.”

Chris Smith from the Travellers’ Times echoed this view in comments made to OpenDemocracy. Smith said: “Homelessness, Brexit and Terrorism, Mr Douglas Ross could have chosen any of these issues to deal with.

“Instead he chose to go with ‘tougher enforcement against gypsies and travellers’, the UK’s largest indigenousness ethnic group, some of whom will be his constituents.

“It is not remotely surprising, coming from a party which – under Ruth Davidson – openly embraces prejudice by readmitting people with racist, sectarian and prejudiced views.” SNP spokesperson

These remarks are not the first of their kind from Douglas Ross. The then MSP faced criticism earlier this year after he branded Gypsy/Traveller campsites as “a blight on communities”, in response to Scottish Government guidance on provision of facilities for unauthorised campsites.

This latest incident has only added fuel to the fire of controversy surrounding the Scottish Conservative Party this week following the revelation that two councillors, suspended over racist and sectarian social media posts, have been reinstated in the party.

An SNP spokesperson said: “The Gypsy Traveller community are part of Scotland’s rich cultural heritage and itspeaks volumes that, of all the issues facing the country, Douglas Ross thinks this should be a priority for the Prime Minister, or even for his own constituency of Moray.

“But in some ways it is not remotely surprising, coming from a party which – under Ruth Davidson – openly embraces prejudice by readmitting people with racist, sectarian and prejudiced views as elected representatives.”

John Finnie, justice spokesperson for the Scottish Greens and MSP for the Highlands and Islands, described Ross’ latest remarks as further evidence of the Conservative Party’s “nastiness”.

Finnie said:  “Douglas Ross was given an open goal, be PM and sort anything you want. He didn’t choose improving health, education or housing, he didn’t seek to eradicate poverty, work for a better planet or peace.

“Rather he chose to attack an already beleaguered minority, our Gypsy Travellers. Much like Donald Trump seemed emboldened the more outrageous he became, so Scotland’s Conservatives, whose ranks boast racists and sectarian bigots, keep up the nastiness.

“Douglas Ross is a former justice spokesperson for his party and should know full well the discrimination faced by the Gypsy/Traveller community. Of course rather than defend that community Ross joins in the ignorant attacks they face on a daily basis.”

This marks the second time in a week that political opponents, charities and onlookers on social media have united to condemn offensive attitudes within the Scottish Conservative Party.

A Scottish Labour spokesperson said: “These are abhorrent, disturbing and extremely offensive comments.

“It speaks volumes about Tory MPs that their number one priority is oppressing minority groups – not tackling the misery and poverty they have caused across Scotland and the whole of the UK.

“Coming just after Ruth Davidson reinstated two racist councillors, it is becoming clearer by the day that the Tories really are the same old nasty party. Douglas Ross must immediately apologise for these comments.”

Those who are concerned by the events of this week continue to ask “where is Ruth Davidson?”, as the party leader has failed to comment on the controversies.