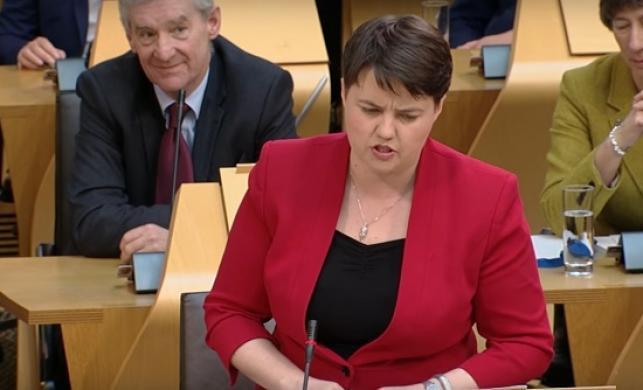 Conservatives under continued pressure over links to corporate lobbying

FOLLOWING confirmation of the December General Election, the Scottish Conservatives have been accused of misleading voters with campaign materials using former leader Ruth Davidson as a figurehead.

The party, which has yet to name a date for its leadership contest since Davidson stood down at the end of August, has come under pressure from the SNP to elect a new leader in time for the winter election.

Jackson Carlaw MSP, who had been deputy leader of the party under Davidson, has been acting as leader in the interim.

However, campaign materials delivered by the Scottish Conservatives which have been shared across social media show that an image of Ruth Davidson is still being used to promote the party.

The SNP has branded this as “duplicitous”, given that these materials are being used in to aid the election of a prime minister whom Ruth Davidson could not support.

READ MORE: Analysis: With a general election looming, everything is at stake

Commenting, SNP MP Tommy Sheppard said: “Boris Johnson was too hard-line and right-wing even for Ruth Davidson to stomach.

“But now she’s the figurehead of their campaign pleading for people to vote for him in a General Election. It’s duplicitous, cynical, and voters will see right through it.

“She has left a vacancy at the helm for two months now, and still there’s no plans in place to appoint a successor.

“Scottish voters deserve to know in advance of an election, or can otherwise assume the next leader of the Scottish Tories will be a hard-line Brexiteer hand-picked by Boris Johnson.”

Several Tory MSPs including Miles Briggs, Murdo Fraser and Liam Kerr have been tipped as possible candidates for the role.

In the short-term, it is expected that Jackson Carlaw will lead the party’s General Election campaign in Scotland.

According to the BBC’s Philip Sim, Ruth Davidson is being used on the campaign leaflets “basically because the Scottish Tories weren’t sure when the election and indeed their leadership contest was going to be, and didn’t think it would be fair to have leadership contenders on the leaflets if they clashed”.

Ruth Davidson has been typically regarded by the Conservatives as a popular figure within Scotland.

However, the former leader, who will stand down as an MSP in 2021, has been the subject of recent controversy over a job at lobbying firm Tulchan Communications which she intended to take up with immediate effect.

Davidson announced on Tuesday that she would no longer be accepting the role which she conceded had become “contentious”, after outcry from opposing MSPs.

The role would have paid £50,000 for 25 days’ work a year and would have seen Davidson representing a variety of corporate clients.

SNP, Labour and Green MSPs all raised concerns that this would lead to a conflict of interest.

While the Scottish Conservatives backed Davidson’s second job last week, she backed down on Tuesday, stating that “the consensus view from political opponents and commentators is that working to improve businesses’ understanding of the cares and concerns of people is somehow incompatible with my role as an MSP.”

Scottish Labour MSP Neil Findlay, who has put forward a member’s bill with the aim of banning second jobs for MSPs, said the incident demonstrated the need for a legal change.

Findlay said: “After a week of refusing to budge, Ruth Davidson has finally reflected on the widespread anger which has been expressed across the parliament and among the public at large.

“This is to be welcomed. There is a clear conflict of interest in an elected representative working for a company which lobbies politicians on behalf of corporate interests.

“In accepting this job in the first place, Davidson did lasting damage to the reputation of the Scottish Parliament. She receives a generous salary from the public purse, and seeking to trouser £50,000 for just 24 days a year gives a strong impression of politicians on the make.

“If it is true that the parliamentary authorities approved Davidson’s job with a lobbying firm, then it just demonstrates that the rules are not fit for purpose.

“I hope that this sorry saga will lead MSPs from across the political spectrum to realise that the rules need to change, and to support my bill in parliament.”

However, Davidson’s decision has not ended the criticisms of Conservative Party links to corporate interests.

It has been revealed that the party’s General Election manifesto will be written by Rachel Wolf, a partner at corporate lobbying firm Public First. The firm works for major clients including Amazon, Facebook. Uber, Google, Airbnb,  and fracking company Cuadrilla.

Responding to the news, Scottish Green co-leader Patrick Harvie MSP tweeted: “No wonder Ruth Davidson saw no problem with working for a PR outfit while still being an MSP.

“This kind of thing’s so deeply ingrained in Tory culture that they have a corporate lobbyist writing their manifesto! And again, it’s one which doesn’t follow the PRCA [Public Relations and Communications Association] code.”

Labour’s shadow secretary of state for business, innovation and skills Jon Trickett MP said it was an “outrage to democracy that the frackers, the tax avoiders and the zero-hour exploiters will have the biggest say when it comes to Tory policy”.

Trinkett has said that a Labour government would “tear up” existing rules on corporate lobbying to ensure that regulations are strengthened.