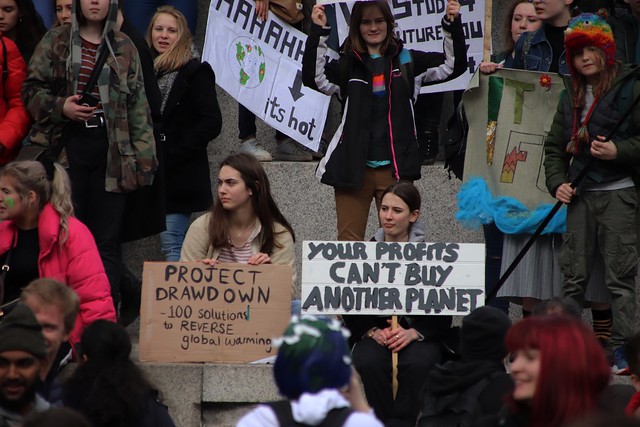 UNISON SCOTLAND, one of the country’s biggest trade unions, is organising a day of action on 20 September in support of the next global climate strike that day, but say they can’t join join the school students on strike due to “draconian anti-trade union laws”.

The 2019 global youth climate strikes, inspired by Swedish school student Greta Thunberg’s solo strike last year, have seen millions of students in thousands of locations around the world refuse to go to school for a day and join mass demonstrations for emergency action to tackle the threat posed by looming climate catastrophe.

In Scotland, the most recent climate strike in May saw tens of thousands of students take part in locations across the country.

Thunberg has called for adults to join the 20 September action, which will come shortly before a crucial UN summit on climate action and kick-start a week of “resistance”, to make it a global general strike.

“We’re asking adults to step up alongside us. Step out of your comfort zone to make this a turning point in our history. This is about crossing lines – it’s about rebelling wherever one can rebel,” the youth strikers wrote in a letter in The Guardian announcing the global general strike.

Writing on Unison Scotland’s blog on Tuesday [12 August], Stephen Smellie, deputy convener of the union in Scotland, said they wanted to make the 20 September day of action in support of the school climate strikers was “a real opportunity for branches and activists to make the issue a priority for our members and our employers”.

Smellie said that the union was unable to call strike action “due to our draconian anti-trade union laws”, but that there was “nothing to prevent workers taking annual leave or flexi-leave on the day to join school students marching in the streets to demand action”.

The 1992 Trade Union and Labour Relations Act, widely hated by the trade union movement in the UK, prohibited trade unions to take industrial action unless it was “in contemplation or furtherance of a trade dispute”. Employment law remains a matter reserved to Westminster in the UK constitutional settlement.

Smellie added: “The past few weeks of extreme weather with record high temperatures followed by days of torrential rain disrupting train and road travel, threatening infrastructure like dams, has illustrated that climate change has already arrived and that the climate emergency that Greta and others have been protesting about is already here.

“It is working people and the poor who will suffer most. Faced to live and work in increasingly difficult environments, prices of travel and food increasing, public service money to be diverted to repair and protect bridges, rail tracks and roads from weather damage, will force us all to pay for the climate crisis just as we paid for the banking crisis. Whilst the rich can afford their air-conditioning and moving to areas away from flood risks, working people will continue to suffer when temperatures soar and be given sandbags when flood waters rise.”

Thunberg has begun her journey to the 23 September UN Climate Action Summit in New York already, travelling across the Atlantic via yacht rather than a flight to highlight the need to take action to cut global carbon emissions.

Meanwhile, the UN Climate Summit could take place in Glasgow in 2020, with the UK and Italy putting in a joint bid for the conference. If successful, 30,000 delegates will cram into the SECC for the 26th UN conference of its type.